Why does "explaining away" make intuitive sense?

I recently learned about a principle of probabilistic reasoning called "explaining away," and I am trying to grasp an intuition for it.

I use "explain away" reasoning, if $C$ occurs, one of $P(A)$ or $P(B)$ increases, but the other decreases since I don't need alternative reasons to explain why $C$ occurred. However, my current intuition tells me that both $P(A)$ and $P(B)$ should increase if $C$ occurs since $C$ occurring makes it more likely that any of the causes for $C$ occurred.

How do I reconcile my current intuition with the idea of explaining away? How do I use explaining away to justify that $A$ and $B$ are conditionally dependent on $C$?

if C occurs, one of P(A) or P(B) increases, but the other decreases

This isn't correct. You have (implicitly and reasonably) assumed that A is (marginally) independent of B and also that A and B are the only causes of C. This implies that A and B are indeed dependent conditional on C, their joint effect. These facts are consistent because explaining away is about P(A | C), which is not the same distribution as P(A). The conditioning bar notation is important here.

However, my current intuition tells me that both P(A) and P(B) should increase if C occurs since C occurring makes it more likely that any of the causes for C occurred.

You are having the 'inference from semi-controlled demolition' (see below for details). To begin with, you already believe that C indicates that either A or B happened so you can't get any more certain that either A or B happened when you see C. But how about A and B given C? Well, this possible but less likely than either A and not B or B and not A. That is the 'explaining away' and what you want the intuition for.

Let's move to a continuous model so we can visualise things more easily and think about correlation as a particular form of non-independence. Assume that reading scores (A) and math scores (B) are independently distributed in the general population. Now assume that a school will admit (C) a student with a combined reading and math score over some threshold. (It doesn't matter what that threshold is as long as it's at least a bit selective). 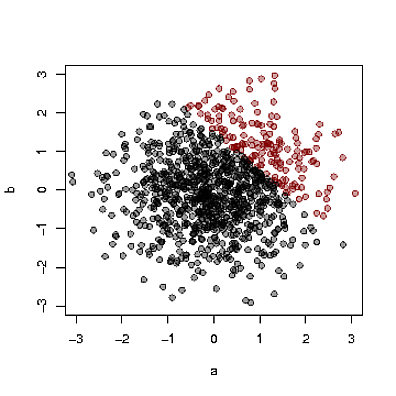 Because good math scores offset bad reading scores and vice versa, the population of admitted students will be such that reading and math are now dependent and negatively correlated (-0.65 here). This is also true in the non-admitted population (-0.19 here).

So, when you meet an randomly chosen student and you hear about her high math score then you should expect her to have gotten a lower reading score - the math score 'explains away' her admission. Of course she could also have a high reading score -- this certainly happens in the plot -- but it's less likely. And none of this affects our earlier assumption of no correlation, negative or positive, between math and reading scores in the general population.

Moving back to a discrete example closer to your original. Consider the best (and perhaps only) cartoon about 'explaining away'. 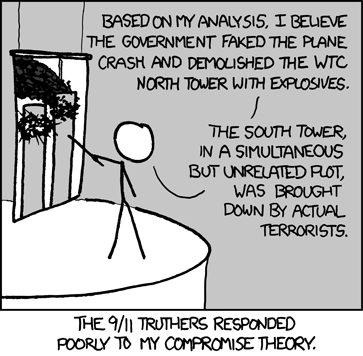 The government plot is A, the terrorist plot is B, and treat the general destruction as C, ignoring the fact there are two towers. If it is clear why the audience are being quite rational when they doubt the speaker's theory, then you understand 'explaining away'.

I think your intuition is ok but your understanding of "explain away" reasoning is wrong.

In the article you linked to

This is quite different from your:

I use "explain away" reasoning, if $C$ occurs, one of $P(A)$ or $P(B)$ increases, but the other decreases since I don't need alternative reasons to explain why $C$ occurred.

Think of it another way. The ground is shaking. You observe $B$, the giant is wandering around. This explains away $C$, so it seems unlikely that there is now an earthquake - you settle for the giant explanation. But observing the giant was key - until you had this as the likely explanation of the earthquake, nothing had been explained away. When all you had was $C$, in fact both $P(A|C)$ and $P(B|C)$ are > $P(A)$ and $P(B)$ respectively, as per @Glen_b's answer.

In the absence of specific additional information that changes the conditional probability of $A$ or $B$, Bayes rule tells you

It will be of interest to see if one becomes relatively more likely after observing $C$ compared to before.

You're asking for intuition. What does it mean that $A$ and $B$ are independent? It means that if I tell you that I've just seen the monster, your opinion about the occurrence or not of the earthquake doesn't change; and conversely. If you think that both $P(C\mid A)$ and $P(C\mid B)$ are high, and I tell you that the ground is shaking and there is no monster in the town, wouldn't that change your opinion about the occurrence of the earthquake, making it more probable?

From the linked abstract, it appears that "explaining away" is discussing a learning mechanism, a common way that humans reason, not a formal method of logic or probability. It's a human-like way of reasoning that's not formally correct, just as inductive reasoning is not formally correct (as opposed to deductive reasoning). So I think the formal logic and probability answers are very good, but not applicable. (Note that the abstract is in a Machine Intelligence context.)

Your giants example is very good for this. We believe that earthquakes or giants can cause the ground to shake. But we also believe that giants do not exist -- or are extremely unlikely to exist. The ground shakes. We will not investigate whether a giant is walking around, but rather we'll inquire as to whether an earthquake happened. Hearing that an earthquake did in fact happen, we are even more convinced that earthquakes are an adequate explanation of shaking ground and that giants are even more certain not to exist or are at least even more highly unlikely to exist.

We would only accept that a giant caused the ground to shake only if: 1) we actually witnessed the giant and were willing to believe that we were not being fooled and that our previous assumption that giants were highly-unlikely or impossible was wrong, or 2) we could totally eliminate the possibility of an earthquake and also eliminate all possibilities D, E, F, G, ... that we previously had not thought of but that now seem more likely than a giant.

In the giant case, it makes sense. This learning mechanism (an explanation we find likely becomes even more likely and causes other explanations to become less likely, each time that explanation works) is reasonable in general, but will burn us, too. For example, the ideas that the earth orbits the sun, or that ulcers are caused by bacteria had a hard time gaining traction because of "explaining away", which in this case we'd call confirmation bias.

The fact that the abstract is in a Machine Intelligence setting also makes me thing this is discussing a learning mechanism commonly used by humans (and other animals, I imagine) that could benefit learning systems even though it can also be highly flawed. The AI community tried formal systems for years without getting closer to human-like intelligence and I believe that pragmatics has won out over formalism and "explaining away" is something that we do and thus that AI needs to do.

I think an easier way to think of it is: If there is any variable $C$ $(0<P(C)<1)$ such that the occurrence of $C$ increases the probability of both $A$ and $B$, then $A$ and $B$ cannot be independent. In your example, you actually chose variables that you intuitively understand to be dependent, not independent. That is, the event that there is an earthquake and a giant stomping around aren't independent, since they both are more likely to occur when the floor is shaking. Here is another example: Let C be the event that it rains, and A be the event that you use an umbrella, and B the event that you wear rainboots. Clearly A and B are not independent because when C occurs, you are more likely to both wear galoshes and carry and umbrella. But if you lived in an area that never, ever rained, then A and B could potentially be independent--neither the umbrella nor galoshes are being used as rain gear, so perhaps you wear the galoshes in the garden and use the umbrella to catch fish. They are only able to be independent because they don't share a cause.

Here is a proof: Suppose $A$ and $B$ are independent and also conditionally independent given $C$.

Not the answer you're looking for? Browse other questions tagged probability intuition or ask your own question.

396
Explaining to laypeople why bootstrapping works
3
What is the probability that a sequence of events completes within a given time interval?
26
When does Fisher's "go get more data" approach make sense?
0
Is this intuitive explanation of joint probability correct?
0
Why does Uniform distribution make sense?
2
Does it make sense to make a conditional Markovianity assumption?