In math class we were asked an optional problem I can't solve on my own:

You are fighting a dragon with 250 hit points and are rolling a 20 sided die to deal damage. The dragon takes damage equal to the number rolled on the die with 2 exceptions: If you roll a 20 you deal no damage (dragon is immune to critical damage) and if you roll a 1 you break your combo and the dragon kills you immediatly. You roll until the dragon is defeated or you roll a 1 and break your combo. What is the probability of defeating the dragon?

I did understand that the problem is a lot more complex than it seems, since the probability changes drastically with the number of rolls before any other roll and their results.

Through empirical testing with a small python program, the probability of winnng came out to be only about 25%, which surprised me, given the chance of dealing damage is 90%.

How would you correctly tackle the problem and even leave it "parameterized" so the HP of the dragon and number of sides on the die could be changed?

Your suggestion to solve a general version of the problem is spot on. Let's set this up.

The die has two special outcomes: "death," which terminates the process, and 0, which has no effect. We might as well remove the 0, creating a "truncated die" of 19 sides. Let the probability that the die shows up a numeric value $\omega$ be $p(\omega)$ and let $p_{*}$ be the probability of death. $\Omega$ is the set of all these possible numeric values (not including "death," which is non-numeric).

You aim to reach a total of $T$ before observing "death." When $T\le 0,$ you have achieved this threshold, so the chance of winning is $1.$ Otherwise, when $T \gt 0,$ partition the event "eventually I win" into the separate numbered outcomes occurring within $\Omega.$ It is an axiom of probability that the chance of this event is the sum of the chances of its (non-overlapping) components.

This recursion can be carried out with a simple form of a dynamic program. Unless the values and probabilities are very special, you can't hope to write a nice closed formula for the solution. You just have to carry out the calculation by computing the values for $T=1,$ $T=2,$ etc., in order. (This is called "eliminating tail recursion" in computer science.)

The number of calculations performed by this algorithm is proportional to $T$ times the number of unique values on the truncated die. That makes it effective for moderately large $T$ and realistic dice.

That's pretty close to the answer I obtained.

I leave it to you to write the program. It will require a data structure that can store all the values of $\Pr(\text{Reach } T-\omega)$ given on the right hand side of the formula. Consider using an array for this, indexed by the values $0,1,2,\ldots, T.$

BTW, there are other solution methods. This problem describes a Markov Chain whose states are the total values that have been reached (from $0$ through $T,$ since anything larger than $T$ might as well be combined with $T$), along with a special (absorbing) "death" state. This chain can be analyzed in terms of a large matrix (having $250+2$ dimensions). As a practical matter this formulation isn't worth much, but the theory of Markov Chains provides insight into the process. You can mine that theory for information on your chances of winning and on how many rolls it is likely to take you to win if you do.

Yet another approach was suggested in a comment to the question: exploit a geometric distribution. This refers to analyzing the process according to how many rolls you will have before dying. To deal hit points, imagine rolling the die, with its "death" face removed parallel with flipping a (biased) coin, whose function is to determine whether you die. (Thus, in the situation of the question, each of the 19 remaining sides of the die--including the $0,$ which must be left in--has a $1/19$ chance; more generally, the side with value $\omega$ has a chance $p(\omega)/(1-p_{*}).$) The two sides of the coin are "death" (with probability $p_{*}$) and "continue" (with probability $1-p_{*}$). At each turn you separately roll the truncated die and flip the coin, accumulating hit points until you reach the threshold $T$ or the coin turns up "death."

A simplification is available, because it's easy to work out the chance of never flipping "death" in the first $n=0,1,2,\ldots$ turns: it equals $(1-p_{*})^n$ because all the flips are independent. Formally, this describes a random variable $N$ whose value equals $n$ with probability $p_{*}(1-p_{*})^{n}.$ (This is a geometric distribution).

To model the rolls of the truncated die, let $X_1$ be its value in the first roll, $X_2$ its value in the second roll, and so on. The sum after $n$ rolls therefore is $S_n = X_1 + X_2 + \cdots + X_n.$ (This is a random walk.) The chance of reaching the threshold can be computed by decomposing this event into the countable infinity of possibilities corresponding to the number of rolls needed. The basic rules of conditional probability tell us

The right hand side requires us to find these chances of each $S_n$ reaching the threshold. Although this isn't much of a simplification for a general die ($S_n$ can have a very complicated distribution) , it leads to a good approximation when the process is likely to take many rolls before dying or reaching the threshold. That's because the sum of a large number of the $X_i$ approximately has a Normal distribution (according to the Central Limit Theorem). When the expectation of the truncated die is $\mu$ (equal to $9.45/(1-0.05)$ in the question) and its variance is $\sigma^2,$ the distribution of $S_n$ has an expectation of $n\mu$ and variance of $n\sigma^2$ (according to basic laws of expectation and variance as applied to the independent variables $X_1,X_2,\ldots, X_n$). Writing $\Phi(x;n\mu,n\sigma^2$ for the Normal distribution function with expectation $n\mu$ and variance $n\sigma^2,$ we obtain

Plugging this into $(*)$ along with the geometric distribution law yields

As a practical matter, we may terminate the sum by the time $\sum_{i=n}^\infty p_{*}(1-p_{*})^i$ is less than a tolerable error $\epsilon\gt 0,$ because the $\Phi$ factor never exceeds $1.$ This upper limit equals $\log(p_{*}\epsilon)/\log(1-p_{*}).$ (For the situation in the question, that upper limit is around 418.) We can also work out a reasonable value for beginning the sum (by skipping over really tiny initial values). That leads to the relatively short and simple code shown below (written in R). Its output, obtained through the command dragon.Normal(), is $0.269879\ldots,$ agreeing with the exact answer to five significant figures.

I think the most understandable method to compute probabilities like these is to define a Markov chain that represents all of the possible states that the game can be in, with absorbing states that represent the death of either the player or the dragon.

In this example, you can define a separate state for every possible value of damage that could have been dealt to the dragon (from 0 to 249). Additionally, you need two absorbing states to represent when either the player or the dragon dies. In an absorbing state, there is no escape. You have a 100% chance of remaining in that state for eternity.

Finally, you define your initial state probability distribution vector (in this case we have a 100% chance of starting in the 0 damage state), and left-multiply this vector by your transition matrix raised the power of the number of times you repeat your attacks. This will output the exact probabilities that you will be in each state. In this game, there is a theoretical chance for the fight to last arbitrarily long if you continue rolling critical hits. One way to get around this possibility is to redefine the game to work on a 19 sided die and remove the critical strike option, since it is overall irrelevant to the final probabilities. Another option is to simply attack a huge number of times such that the chance the fight hasn't ended is essentially zero.

Since you mentioned Python, I've written up some functions for you that create the Markov transition matrix and compute the state probabilities.

For fun, I've also attached a figure showing your probability to defeat the dragon when given its HP. 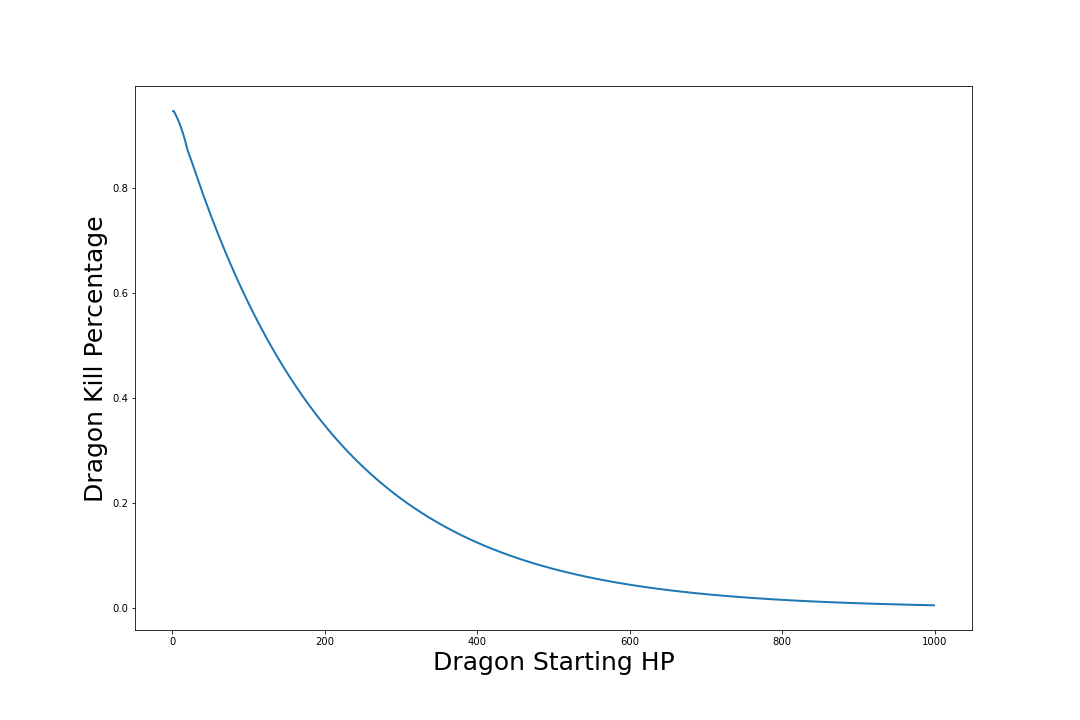 Plan: We'll construct the recursion relation for the probabilities in question, and then apply techniques from linear algebra to solve it. (The nice feature of this approach is that its computational complexity is independent of how many health points the dragon has... so no matter if the dragon has 250 or 250 million points we do the same amount of computation. This is not the case for the other approaches here.)

We could jump right to the recursion formula, but let's warm up and motivate it by setting up the Markov chain it follows from.

We win, and the chain terminates, once we've taken all the dragon's life points, i.e. once the Markov chain reaches any state $ |n \rangle $ with $ n \leq 0$.

Let's call the probability of defeating a dragon with $n$ health points $p(n)$.

Now, after one roll of the die, we might either

If we could solve this recursion relation, then our answer would be $p(250)$.

There a many ways to solve this equation, for example explicitly unrolling the recursion, but that would take $O(n)$ steps of computation.

Since this equation is linear, we can do better.

We can find a basis of solutions by making the Ansatz $p(n) = x^{-n}$, where $x$ is TBD. Plugging that into the recursion equation and simplifying a bit we find $$m-1 = \sum_{i=2}^{m-1} x^i$$ This is sometimes called the characteristic equation of the chain.

It is a polynomial equation of degree $m-1$ so it has $m-1$ solutions.

We're almost there now... all we need is to determine the $w_\alpha$.

This amounts to a matrix inversion, and again can be done numerically. 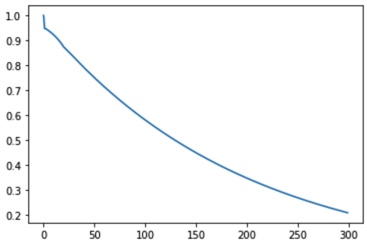 Not the answer you're looking for? Browse other questions tagged probability algorithms games or ask your own question.

187
What intuitive explanation is there for the central limit theorem?

6
What is the probability of rolling all faces of a die after n number of rolls
3
Find the pmf of a bivariate distribution when rolling a black and red four-sided die
4
Probability of rolling one die by two persons 3 times each, and problem with pulling out cards
6
Probability that exactly y of n rolls of an r-sided die are unique
0
Expected rolls to get n result k times non-consecutively
0
Rolling one die after another
5
Rolling a $6$ Sided Die
1
Probability of getting a 6 on at least one die from a pair of dependent dice
2
Paradox game for life and death