I'm struggling with a proof of the normal equation, so I posted a question which hopefully will get resolved soon. However, I mentioned there that I'm uncomfortable with the proofs dealing with matrix calculus, particularly when it comes to derivatives of product of vectors or product of matrices and vectors. Furthermore, there are a couple of "layout conventions" which are not even used consistently. Because of this, I thought I could get rid of all that insanity by using tensor notation instead.

In relation to the normal equation question, I would be very interested in looking at a proof of this equation (here you can see the context):

And as a more general request, I'd like to get an advice on the issue of dealing with matrix calculus and derivatives. Particularly, I want to hear about your approach when you have to calculate something of this kind given the inconsistencies in notations and non-intuitive nature of some identities. Do you consult Wikipedia or some handbook every time you want to calculate a derivative of some product of vectors or matrices? Do you memorize some recurrent identities? Do you know an alternative procedure?

A "modern" (post-1900) view of tensors is a geometric one. Perhaps the clearest notation would therefore be a figure, because the "normal equations" are nothing more than a familiar, ages-old theorem of plane geometry!

Geometrically, the inner sum of products represents the application of the linear transformation determined by the matrix $x = (x_{i,j})$ to the $p$-vector $\beta$. As such we conceive of $x$ as representing a map $x: \mathbb{R}^p\to \mathbb{R}^n$. The outer sum is the usual Pythagorean formula for the Euclidean distance. Geometrically, then,

The test of this is to take any other vector $\beta'\in \mathbb{R}^p$ and to compare distances within the triangle formed by the three points $y$, $x\hat\beta$, and $x\beta'$: 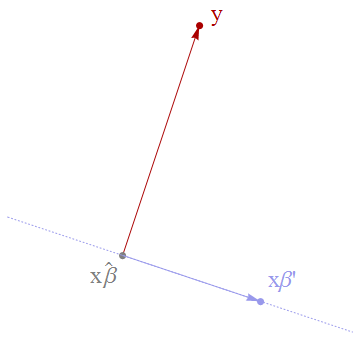 According to Euclid, three (distinct) points determine a plane, so the figure is utterly faithful: all our work is done within this plane.

We also know from Euclid that the ray $y - x\hat\beta$ must be perpendicular to the ray $x\beta' - x\hat\beta$. (This is the heart of the matter; in making this observation, we are really done and all that remains is to write down an equation expressing this perpendicularity.) Modern geometry has several notations for perpendicularity, which involves the (usual) "dot product" or positive-definite linear form (a "tensor of type $(2,0)$" if you wish). I will write it as $\langle\ ,\ \rangle$, whence we have deduced

for all $\beta\in\mathbb{R}^p$. Because the usual dot product of two vectors in $\mathbb{R}^n$ is

the preceding may be written

Geometrically, this says that the linear transformation from $\mathbb{R}^{p*}\to\mathbb{R}^n$ defined by applying $x^\intercal (y - x\hat\beta)$ to $\beta'^\intercal$ is the zero transformation, whence its matrix representation must be identically zero:

We are done; the conventional notation

(where "$\left(\right)^{-}$" represents a generalized inverse) is merely an algebraically suggestive way of stating the same thing. Most computations do not actually compute the (generalized) inverse but instead solve the preceding equation directly.

If, as an educational exercise, you really, really want to write things out in coordinates, then I would recommend adopting coordinates appropriate to this configuration. Choosing an orthonormal basis for $\mathbb{R}^n$ adapted to the plane determined by $y$ and $x\beta'$ for some arbitrary $\beta'$ allows you to forget the remaining $n-2$ coordinates, because they will be constantly $0$. Whence $y$ can be written $(\eta_1, \eta_2)$, $x$ can be written $(\xi_1, \xi_2)$, and $\beta'$ can be considered a number. We seek to minimize

OLS claims that this is achieved for

provided $\xi_1^2 + \xi_2^2 \ne 0$. An elementary way to show this is to expand the former expression into powers of $\beta$ and apply the Quadratic Formula.

The proof for the normal equation (in matrix notation):

As we can see from the proof above, there exists a consistent layout conventions in dealing with matrix calculus, the same way that there exist a layout convention in calculus under the real line. The key to understand matrix derivatives, as with derivatives for functions $f:\mathbb{R}\to\mathbb{R}$ is practice. Take a look at the Matrix Cookbook for further reference.

Not the answer you're looking for? Browse other questions tagged regression notation matrix-calculus tensor or ask your own question.