Hypothetical Scenario: A few continuous variables, each measured repeatedly at, say 12 time points, each with say, 150 observations. There are small fluctuations from one time point to another (i.e. change is not that smooth), but the variables are showing overall time-related changes.

Question: What are different options and their pros and cons in plotting and presenting change in such data? Would be excellent if example graphs/codes could be attached.

This is probably a very vague and general question, and I understand that it very much depends on what one wants to highlight, the kind of analyses conducted, the number of time points, the number of observations, etc. But it would be very helpful to have an idea how people usually plot their longitudinal data and what (nice) options are available. I'm particularly interested in hearing the options to highlight time-related changes integrated with individual differences (e.g. variability at each time point and variability in growth curve trajectories) in these changes.

For those interested, here is some randomly selected 100 observations from one segment of 12 time points to play with. Missings were coded as NA and data were structured wide.

Here's one idea for visualizing your data. Using a variation of small multiples, you could have two charts: one showing the variables' mean with a focus on a variable of interest (including SE or SD), with the second showing the focused variables individual observations.

The following chart shows three variables across 6 time periods, with 50 observations each. The shaded area indicates the SE of the focus variable, which is highlighted similarly in both charts. 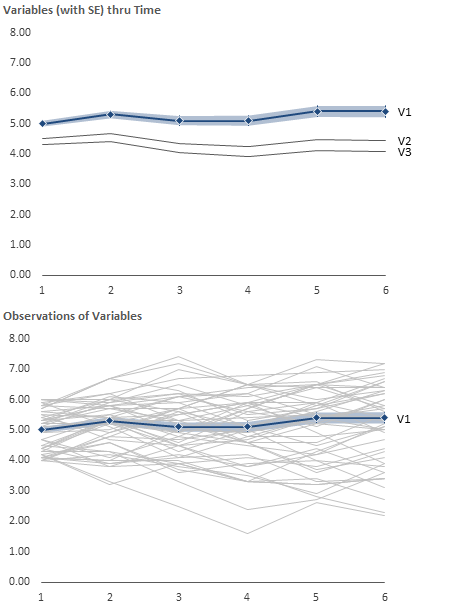 This could be easily scaled up or down based upon your specific needs. It can also be interactive, with a drop-down selection of a variable, and the focus and observations changing to the new item of interest.

EDIT: Here's another example, using your sample data. This shows the mean and SE (disregarding the NA's, since I don't know how you'll handle the calcs). 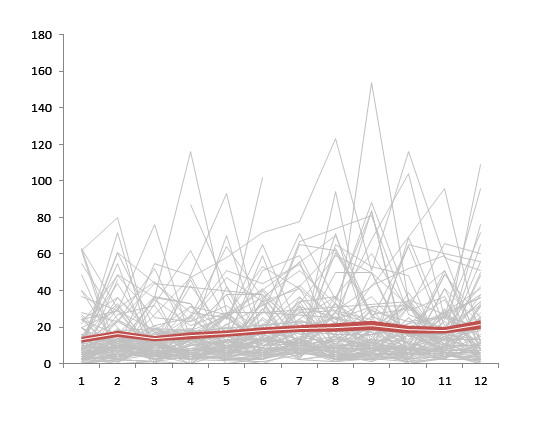 These were done in Excel, so I have no idea what the equivalent R code would be, but someone else here probably does. To create this chart, you'll have to nudge Excel into doing what you want. For the sample data you provided, I:

While this looks pretty convoluted, it only takes 10-15 minutes to complete, which if you're like me is much less than trying to learn R.

One often overlooked problem with plotting/analyzing summary (e.g. mean) curves is how to deal with Phase Variation. In an extreme example, one could plot the mean of 2 sin curves that are 180 degrees out of phase. This would of course be a straight line, which clearly doesn't reflect anything interesting about the individual curves (expect perhaps that they are out of phase).

I know this isn't exactly what your question is about, but I'll go ahead and mention two ways to try and deal with this. The first is to expand a LGCM to a growth mixture model, where you can use latent group membership to try and capture differences in when the curves peak. Another idea is to use functional data analysis for curve registration. I can add more detail later if it would be helpful.

Your choice for the functional form with a latent growth curve model is somewhat limited. Depending on the number of time points available, you can do linear, polynomials, and linear splines. A less used option however is a "freed-loading" model, in which the factor loadings for a single "slope" factor are freely estimated, expect 2 of them, which are set to define the scale of the latent factor (this is nicely described in Bollen and Curran's book on LGCMs). You can estimate this model with as few as 5 time points. It comes in realy useful for non-monotonic, multi-modal curves.

One problem though is that this functional form is the same for every person...it assumed that they all peak and trough and the same points, and variation in the slope factor just describes how much they peak or trough relative to the mean. It does nothing for phase variation. By extending this to a mixture model, where the slope factor loadings are freely estimated for each latent class, you can have a model that captures any important differences in phase variation because they each get their own curves.

Not the answer you're looking for? Browse other questions tagged data-visualization repeated-measures panel-data growth-model or ask your own question.

0
Which is the best comparison method to analyze these data-sets?

1
Logistic regression: should I remove observations with IV combinations that cannot lead to DV=1?
2
Visualling results from longitudinal mixed model with subtle time by treatment trends
1
change scores as predictor variables in a repeated measures multilevel model
1
Can I combine binary and continuous data to meta-analyze prospective changes over time?
0
Using lme4/ linear mixed model to model longitudinal data in which age at first test and duration between measurements vary