Looking at the example below, it does not generate random data points from a certain distribution but it can still draw cumulative probability distribution.

In practice, a very large sample---supposedly from a normal population---can 'fail' a normality test either (a) because the population is not even close to normal or (b) the sample is from a very nearly normal population, but has some unimportant quirk that leads to 'failure' of standard normality tests. Many statistical computer programs (including R) will not perform Shapiro-Wilk normality tests for sample larger than a few thousand.

However, you can (a) make an empirical CDF (ECDF) of the data and compare it with the CDF of an appropriate actual normal CDF, (b) make a normal probability plot (normal quantile-quantile plot) to see if it is approximately linear, or (c) test randomly chosen, moderately large subsamples of the huge sample to see if they, 'pass' the test as normal. 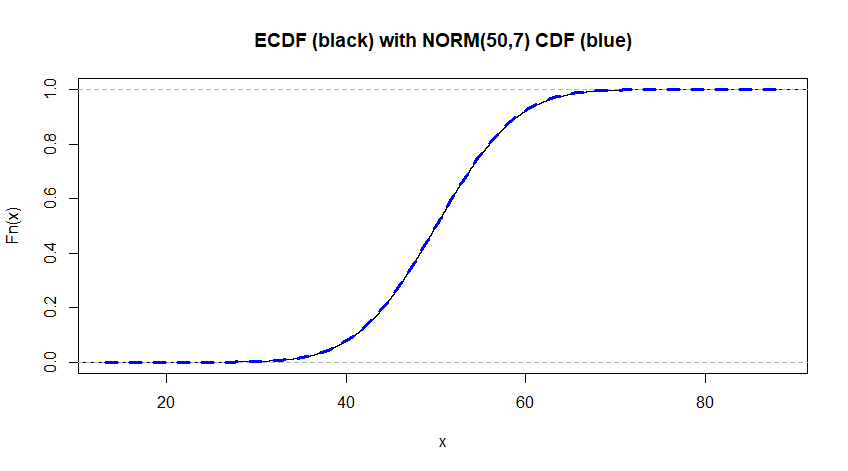 [If you do not know the mean $\mu$ and variance $\sigma,$ you could approximate $\mu$ as mean(x) and $\sigma$ as sd(x),$ which are excellent approximations for such a large sample, to get a very similar plot.]

Normal Q-Q plot. A normal probability plot of x has points that fall very close to a straight reference line (except possibly for a few points near the ends of the plot). 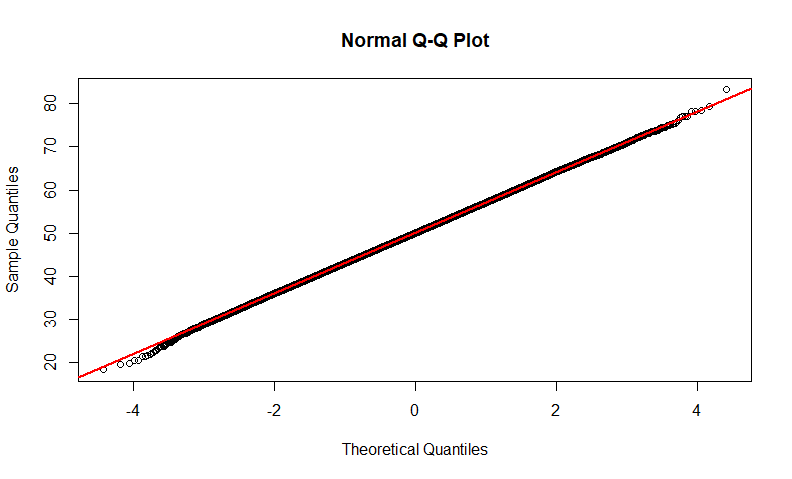 [This method works whether or not you know the population mean and standard deviation.]

Tests on subsamples of moderate size.

Kolmogorov-Smirnov test of match to particular normal distribution: In R, the procedure ks.test will test to see if a sample was taken at random from a particular normal population---with specified mean and SD. We show Kolmogorov-Smirnov tests for three sub-samples of size $1000.$ All three 'pass' the test; that is, the test fails to reject the null hypothesis that data are from $\mathsf{Norm}(50, 7).$

Shapiro-Wilk test to unspecified normal distribution. In R, the procedure shapiro.test will test a sample of size $n_1 \le 5000.$ Here are P-values of three samples of size $n_1=1000,$ all of which fail to reject the null hypothesis of normality at the 5% level. [The null hypothesis of a Shapiro-Wilk test is that data match some normal distribution---mean and SD not specified.] 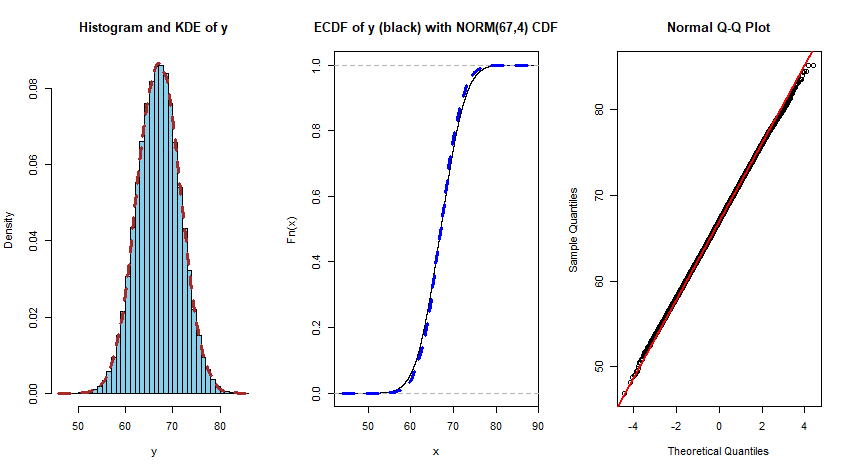 As is often the case, formal tests give a mixed message. Based on a sub-sample of $5000$ students, the K-S test (known for its poor power even for moderately large samples) does not reject the null hypothesis that the population is $\mathsf{Norm}(67, 4.5).$ However, the Shapiro-Wilk test rejects the null hypothesis that y1 is normal at all---regardless of parameters.

Note: If you somehow know that the target distribution is normal and have a huge sample, then you may get a good result by estimating $\mu$ by $\bar X$ and $\sigma$ by the sample standard deviation $S,$ and using the CDF of $\mathsf{Norm}(\bar X, S).$ That may be about as good as using the ECDF of the sample.

Not the answer you're looking for? Browse other questions tagged hypothesis-testing distributions statistical-significance or ask your own question.

7
Find CDF from an estimated PDF (estimated by KDE)