I have the following question: Are there any statistical methods (e.g. hypothesis tests) that allow you to compare the order of two different lists?

Question: Do any statistical methods exist that allow you to determine how similar are the food preferences between both of these students?

I came across a few methods such as the Wilcox Rank Test (https://en.wikipedia.org/wiki/Wilcoxon_signed-rank_test), but I am not sure if this statistical test can be directly applied to this type of question.

Does anyone have any ideas?

Rearranging the data so the foods are in the same order (John's), I got the following vectors, each of 12-counts (you should proofread them):

Then I plotted the vectors against each other. [First as is, where some points overplot. Then (right panel) with slight jittering (random displacements), so that all 12 foods show as separate points.] 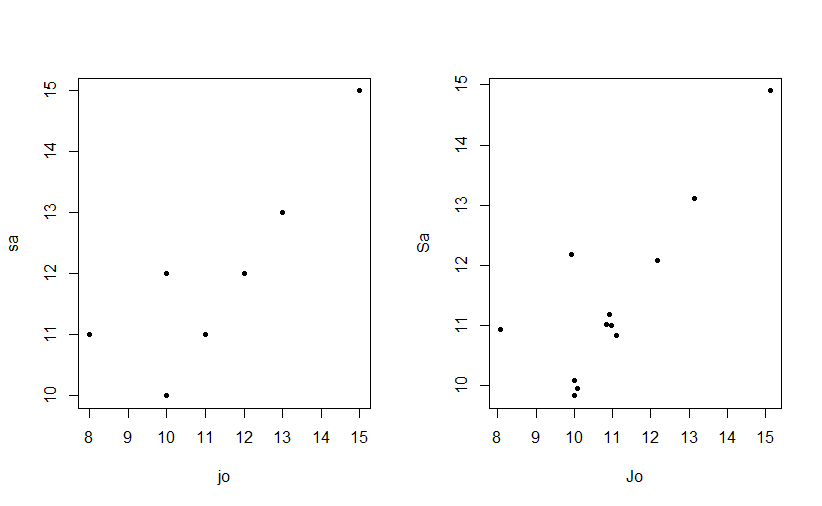 The plots show a clear positive association (that is, the two students tend to share food preferences).

A cor.test in R whether the Spearman correlation is significantly different from $0$ does not give an exact P-value because of the ties, but does seem to reject the null hypothesis of $0$ association. (The corresponding test for Pearson correlation assumes that data are normal, which yours are not.)

Jittering breaks the ties, but loses some information. Even so, a Spearman correlation test on jittered data is still significant at the 5% level. [Moreover, tests on most alternative randomly jittered data also give significant results.]

For more details on the theory and programming of Spearman correlation tests in the presence of ties, see This Q&A.

Notes: (1) I see no reason to do a Wilcoxon test on the paired data. If significant (which it's not), that would show that one student tended to eat more (consistently higher counts) than the other.

(2) You could use a chi-squared test, but it would be significant if preferences were markedly different. A chi-squared test for homogeneity of counts returns P-value $1.$ The small chi-squared statistic does indicate good agreement between the two students, but correlations are a more direct way to see that.

KL-Divergence in a nutshell measures how far apart two distributions are (though I use 'measure' loosely here as KL-Divergence is not a metric because the triangle inequality doesn't hold for it).

If you want to also check how likely it is that two lists come from the same distribution (quite a different question, but in case you're interested), you can use the Kolmogorov-Smirnov test. There is an R package that provides both of these for the discrete case called kldtools, https://cran.r-project.org/web/packages/kldtools/kldtools.pdf I have not tried out this package though. To see more about these tests to see if they are suitable for your problem:
https://en.wikipedia.org/wiki/Kullback%E2%80%93Leibler_divergence#Basic_example
https://machinelearningmastery.com/divergence-between-probability-distributions/
https://en.wikipedia.org/wiki/Kolmogorov%E2%80%93Smirnov_test

Finally, I'm not an expert in these concepts, so take this answer with a grain of salt. I may have some mistakes and if so, hopefully some commenters can point them out and/or offer better answers.