Take a non-symmetric distribution and assume its median exists and you know what it is in advance (call it $\mu$). Then, draw a very large number of independent samples from it (a large multiple of some integer, $n$). Now, divide into groups of $n$ (first $n$ samples in the first group, next $n$ samples in the second group and so on). Find the median for each of these groups. Then, take the median across all these calculate medians. Will this resulting median of medians always be very close to $\mu$ for all (or most) distributions. It is well known that the mean of these medians will be far from $\mu$. However, simulations show me that the median of medians is very very close for a variety of distributions. But can this be proven?

See plot below where I took the median of 100,000 medians where each individual median was from 11 samples for the LogLogistic distribution. The black line ($\mu$) is plum behind the orange line (median of medians). Seems to hold for many other distributions as well. 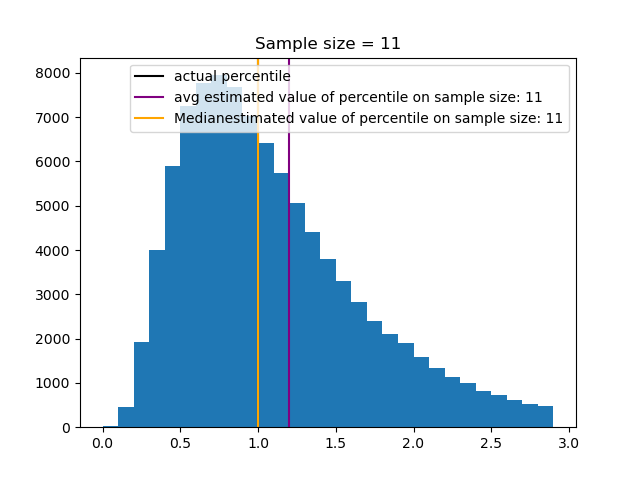 Let's for simplicity deal with samples of odd size $2k+1$, then the median of a sample is the the $(k+1)$-th order statistic.

We can model this order statistic as drawing a quantile $p$ from a beta distribution and transforming with the quantile function, or the inverse of the cumulative distribution

The median of medians is then like drawing several $p$ from that beta distribution, take the median $p_m$ of those $p$ and transform it with the quantile function $Q(p_m)$

It is well known that the mean of these medians will be far from $\mu$. However, simulations show me that the median of medians is very very close for a variety of distributions.

Similar examples can be made with other discrete distributions. When we consider only the median of odd samples then this 'problem' is resolved.

Not the answer you're looking for? Browse other questions tagged descriptive-statistics median or ask your own question.

78
Central limit theorem for sample medians
1
Symmetric distribution with defined mean: is the median always unbiased for the mean?

0
Describing binned data?
5
When does the sum of the medians = the median of the sum
1
Estimation of standard error of the median from median and confidence intervals for meta-analysis?
10
What are the properties of the distribution of medians from samples of a set of integers?