I would be very thankful to have your insight regarding the equation of the estimation models below, and if you can help in clarifying the doubt explained below.

In this research, data was retrieved from the financial statements of German and US companies, for 5 years (2016 to 2020). I ran regressions for all data togheter and also separate regressions for each country. (each country sample size = 15 companies x 5 years = 75 observations)

All the variables are expressed in percentage, except dummy variables (4-year dummies, because 5 years; one dummy LIST – for companies being listed or not listed; IFRS - acounting stadards ). Four models, named Models (1) to (4), are applied to each sample: one for German and another for U.S. firms, (Before, I did tests on mean and also median differences to the numerical variables in the model and the differences were statistically significant for them, that was also a rational to split the sample) Model (1) and Model (2) are pooled OLS models, with the following equations

Then, models are separated by conditioning them via the Stata “if” option for COUNTRY. the subscript i points towards the company dimension (i=1 to 151) and t to the year dimension (t=1 to 5). Year effects are automatically fixed when running the FE model (Deloof 2003) so models (3) and (4) do not indlude year dummies. ε_it represents the idiosyncratic error term (Pais and Gama 2015) in the four models, both in Pooled OLS and FE model types ν_i represents the “unobservable heterogeneity” of each company (García-Teruel and Martínez-Solano 2007, 171, Pais and Gama 2015) in the FE models, that is in Models (3) and (4) only. DOUBT: Are equation formats and the description above relating to the four models, correct?

Do the equations above match to the results below? 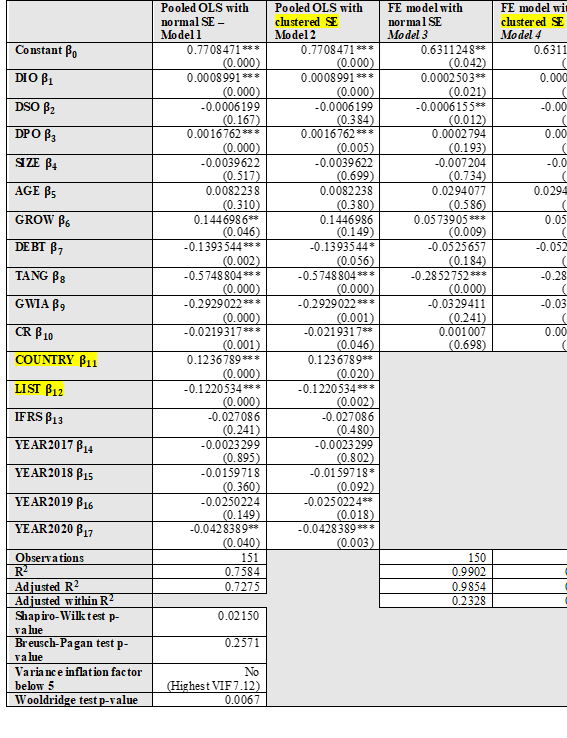 More specifically: DOUBT 1: In Model (4) I am applying the command “reghdfe” in Stata, that is, a linear regression model with multiple possible fixed effects. I based the idea in the following link: https://www.stata.com/meeting/chicago16/slides/chicago16_correia.pdf I am not sure if the estimation equations for Models with the cluster condition – Models (2) and (4) - are the same to the ones of the more usual POLS and FE models without the condition. How can I specify the condition in the equation for Model (2)?

I am not sure if the estimation equations for Model with the cluster condition – Model (4) - is the same as for FE model without the condition. I think both should include/ implements the firm error term and the normal error term. Am I right?

DOUBT 2: I am not sure about when and why should integrating a time dummy/error term in the equation models Model (3) and (4) for the fixed years, I thought it was not needed. In the empirical research literature, I found based in financial statement data with FE, some researchers included, and I did not find a justification for this fact. Should I include or not? Why and/or under what conditions?

DOUBT 3: Should I include a dummy COUNTRY in the equations Model (4) to analyse if its effect is significant, indicating potential differences in the impact of CCC, DIO, DPO and DSO on GPM in GER and USA?

Browse other questions tagged model fixed-effects-model misspecification pooled-model or ask your own question.