Every strike brings me closer to the next home run.

However, I have an intuitive understanding of what he means. Is there some statistically-rigorous way to express it or make sense of it?

Maybe it makes sense for someone looking back on Babe Ruth's career with the benefit of hindsight. Or, maybe if we imagine an omniscient deity who can see the entire timeline of the universe at once. The deity can indeed see that, from any particular moment, there are N strikes remaining before Ruth hits the next home run. Another strike reduces that number to N-1. So, indeed, every strike brings him closer to the next home run.

If I could go back in time and rewrite this question, I would have omitted all the baseball references and simply described a guy rolling dice, hoping for a seven. He says, "I'm hoping for a seven, but I'm not bothered when I get something else, because every roll of the dice brings me closer to that seven!" Assuming he eventually rolls a seven, is his assertion the gambler's fallacy? Why or why not?

It is both meaningful and (usually) correct

You are overcomplicating this by bringing probability into a simple non-probabilistic assertion. You need not invoke an omniscient deity in order to accept that there is a reality that exists independently of knowledge of it. (You seem to be operating under the assumption that reality is only admissible to discussion if there is an omniscient being with total knowledge of it; this is a reasonably common misconception of probability, which is examined in this related question.)

The simplest rigorous examination of this statement is a non-statistical analysis based on looking at the underlying population of values pertaining to all the balls Babe Ruth ever hit. Let $X_1,...,X_N$ be the ordered career outcomes of all balls faced by Babe Ruth, with $X_i = \bullet$ denoting a strike and $X_i = \diamond$ denoting a home-run (we need not specify the notation for other possible outcomes). At the end of ball $n$ the number of balls until the next home-run is:

The only exception to this is when Babe gets to the point where he has already hit his last home-run, so that there are no more home-runs left to come in his career. At this point with have $B_n = \infty$ and getting a strike on ball $n+1$ still gives $B_{n+1} = \infty$. In this latter case Babe is no closer to the next home-run, because there is no next home-run.

Of course, at the time of Babe's last home-run, he probably didn't know that would be his last. (According to this historical account, Babe's last home-run was on 25 March 1935. He went on to play five more times without another home-run.) At that point his saying would be wrong, and looking back in hindsight we now know this.

Ultimately, this statement by Babe Ruth is no more controversial than if he asserted, "The elapsing of time spent not getting a home-run brings me closer to my next home-run". That is of course also true, setting aside the situation where he has no future home-runs to get closer to.

Suppose that at at-bat $t$ Babe has access to the information in the filtration $\mathcal{F}_t$. Write that Ruth's next home run with be at at-bat $N$. Further suppose that each at-bat has probability $p$ of being a homerun.

As I see it, there are two interpretations to this statement.

The Non-gambler's fallcy interpretation is merely a statement about the deterministic course of events that will occur in the future. In that case, you can index all hit hits that are home runs (i.e. the set $\{k_1, k_2, \dots k_m\}$ where $k_i$ is the index corresponds to his $i$'th homerun (total of $m$ homeruns) out of the set of all his hits. After swinging for his $j$th career ball, for $k_i < j < k_{i+1}$, he is one hit closer to his $k_{i+1}$'th hit, which is a homerun. This is not a probabilistic statement, but a statement that is true if you take a deterministic viewpoint of events.

But, in this interpretation, you could say it's meaningless because the fact that he hit the $j$'th ball has nothing to do with getting closer to his next home run. All that mattered here was the passage of time. You could equally say that sitting at the dinner table, or falling asleep, or sitting in a room and counting to ten also brings him closer to his next homerun.

The gambler's fallacy interpretation would be this:

"After each strike, the expected number of subsequent hits before my next homerun is lower."

This is the Gambler's fallacy, assuming that each hit in isolation has an equal probability and is independent of other hits. (But this is a questionable assumption.) Under this assumption, if the probability of each homerun is $p$, you can calculate that the expected number of swings before the next homerun is $$ E[\text{number of swings before homerun}] = \sum_{i=1}^\infty i (1-p)^{i-1} p = \frac{1}{p}. $$ This number is independent of the history of hits, making the statement the gambler's fallacy.

Now, my suspicion is that, if you presented both the interpretations to Babe Ruth, he would suggest that the first interpretation is closer to what he means than the second.

This is very fun to think about. I will answer in terms of probabilities since that is how you framed your original question. Ben has chosen to provide a non-probabilistic answer by retrospectively looking at the sequence of Babe's observed outcomes.

Let's consider a simplified Bernoulli probability model for whether Babe hits a home run. If we let $X$ be the result of an at-bat where $X=1$ "with probability $p$" for a homerun and $X=0$ otherwise, then $P(X=1|p)=p:=\underset{n\rightarrow \infty}{lim}\frac{1}{n}\sum_{i=1}^n X_i$ is a statement about the proportion of homeruns over many, many (infinite in fact) at-bats. $p$ is an unknown fixed constant. When we use probability we are describing the emergent pattern of events over many, many samples. In order for a pattern to emerge that contains homeruns, an eventual home run is inevitable with enough at-bats. It might be more clear to simply say that each at-bat brings him closer to the next home run. This, then, is a no-brainer, a statement of the obvious − Babe cannot strike out indefinitely. Using our simplified Bernoulli model, does this mean that the long-run probability of Babe hitting a home run depends on his past performance? 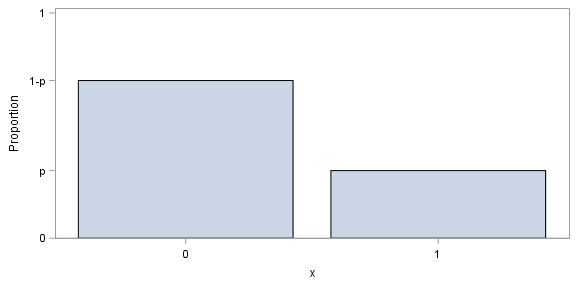 The memoryless property is stating that the emergent pattern over many, many samples is the same no matter how the sequence begins, i.e $P(X=1|p, x_1,...,x_n)=P(X=1|p)$ where we are considering that each at-bat is independent of the others. I don't think these ideas are at odds with Babe's statement. Dave's answer (now since deleted) is correct in terms of expected values, but he is incorrect to apply these probability statements to a single at-bat. In some sense Babe is owed a homerun (in repeated trials) because he cannot strike out indefinitely and still have an expected value of $p$ (or $\frac{1}{p}$ for the geometric distribution of the number of at-bats) where $0<p<1$. Some discuss this idea using the phrase "regression to the mean." Perhaps Babe's statement and your intuition are leading us to the CDF of the geometric distribution, $P(K\le k)=1-(1-p)^{k}$ where $K$ is the number of at-bats until Babe's next homerun. $P(K\le k)$ is also a limiting proportion of many samples or trials, where each homerun constitutes the conclusion of a single sample or trial. Such statements about repeated trials give us confidence in what we should expect to see in our reality since our reality can be viewed as one such trial.

Suppose we had many measurements allowing us to estimate Babe's long-run homerun rate, as well as knowing his observed sequence. We could use this information to calculate a predictive p-value testing a hypothesis about the number of at-bats until Babe's next home run. This predictive p-value is also a long-run probability, but it gives us confidence in our hypothesis regarding the next observed result while incorporating information on Babe's long-run performance AND his most recent performance. This is not a p-value testing a hypothesis about $p$, it is a p-value testing a hypothesis about the next observed result, $H_0$: $K\ge k$ or $H_0$: $K\le k$, unconditional on the unknown fixed true $p$. This is the sort of analysis used to construct prediction intervals for, say, a time series or a Poisson process. Here is an answer discussing the prediction of a single coin toss, analogous to predicting the result of the next at-bat without considering the recent sequence leading up to the next at-bat.

The key to succeeding in the long run with this predictive p-value strategy is to bet only on the length of a run before any data are observed (Neyman-Pearson's error rate). Otherwise, if you have historical data, are in the middle of a run, and interested not only in the ultimate length of the run but also the result of the next flip, one can view the predictive p-value as a weight of the evidence without error rate guarantees (Fisher's evidential p-value).

If we take it as known that $p=0.4$ and reference the CDF of a geometric distribution we see that the probability of the number of flips being at least 12 until a head is observed is $(1-0.4)^{11}=0.004$. This probability from the geometric CDF could be viewed as a p-value testing the hypothesis $H_0$: $p=0.4$. We could instead retain this hypothesis and call into question whether the next flip will land heads. One might also examine the conditional probability $P(K>k|K\ge 11)$. 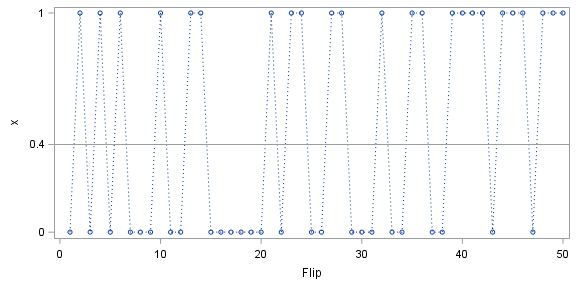 Above is a time series of 50 flips from a coin with $p=0.4$. Observing runs of a few heads or tails is not uncommon, but if a run were to continue long enough we would naturally anticipate it to end, e.g. consider the string of tails leading up to flip 21. In order for $p$ to remain a constant $0.4$ the coin cannot land on heads or tails indefinitely. This is the probabilistic way of interpreting Babe's statement without invoking the gambler's fallacy, i.e. that the limiting proportion $p$ changes as a result of what we observe.

Here is a wikipedia page on prediction intervals and predictive p-values. Here is a paper on the topic.

61
Examples of Bayesian and frequentist approach giving different answers
18
Why do we use term “population” instead of “Data-generating process”?

11
Designing a test for a psychic who says he can influence dice rolls
3
Is this a correct statement of the probability chain rule?
3
Probability statement with a confidence interval
2
Why is this probability statement true?
1
Is the following statement for variance true?
1
Doubt about the equivalence of a particular statement
4
Durrett 2.2.1 and the statement "every convergent sequence is bounded"
2
meaningful difference at a particular point of two cumulative distribution functions