I doubt how to treat my outcome variable, and consequently, which regression analysis I should apply. I'm working with a count variable, namely the times a person said "I don't know" on a total of 45 questions. The distribution is very positively skewed, with a high number of zero's. And there is proof of severe overdispersion. I believe this is because when you say "I don't know" to one question, you are more likely to do this on the other questions, because they are all on the same topic. So the 45 'trials' are not independent.

I could recalculate to a proportion, and apply an extra binomial regression (with number of trials=45) and the estimators I get are the log of the difference in probability of scoring 1 (=don't know, DK) on a particular question (odds ratio).

I could treat it as a count of which the distribution will approximate an extra negative binomial distribution (because the average probability of saying "I don't know" in one trial is low, i.e. 0.05). Then the regression coefficients give me the log of the number of difference in times the respondent says DK (incident rate ratio).

Now my question is, will the extra negative binomial regression correct better for the overdispersion than the extra binomial regression? I feel like I allow the variance to be random twice, once for the 'negative binomial instead of poisson' and once for allowing an 'extra parameter' to estimate variation. Or will the two methods be the same, and can I freely choose based on which interpretation I prefer (odds ratio vs incidence rates ratio)? 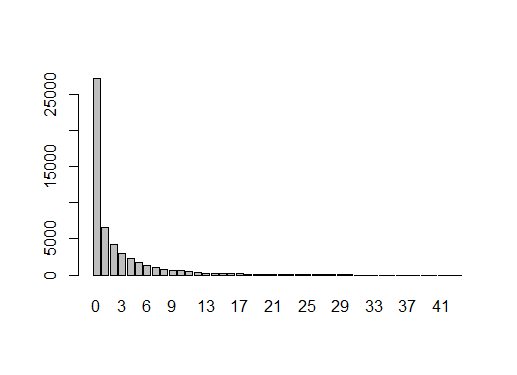 I understand from the answer of Glen_b that for the theoretical negative binomial distribution the variance increases more quickly than the mean. How could I evaluate this in my empirical distribution, since I only have one measurement of the mean and the variance? Should I compare this for different groups of respondents maybe, say men and women, and compare their increase in mean and variance? Would performing GOF tests for Bin and Negbin give me a conclusive anwer?

Which better describes the variance depends on the form of the relationship between the variance and the mean.

I feel like I allow the variance to be random twice, once for the 'negative binomial instead of poisson' and once for allowing an 'extra parameter' to estimate variation.

It's not so much that the 'variance is random' when going from the poisson to the negative binomial (while one way you could generate a negative binomial from something that's conditionally Poisson is to have heterogeneity in the Poisson rate - specifically that it itself is Gamma distributed), that doesn't imply that the Poisson is necessarily a good description even conditionally, and on the other hand, even if it was a situation where you have a heterogeneous mix of Poissons, if the mixing distribution is heavier-tailed than a Gamma, you could get something more overdispersed than a Negative Binomial.

Or will the two methods be the same,

and can I freely choose based on which interpretation I prefer (odds ratio vs incidence rates ratio)?

The odds ratio estimates the incidence rate ratio in a case control study, but I don't think you have that here. I'm not sure I understand enough about your situation to say anything sensible on this.

How can I determine which theoretical distribution my outcome is most inclined to? Does it help if I say the mean is 2.34 and the variance is 18.39. I also added a barplot of my outcome variable to the initial question.

I'd choose between them on the basis of other considerations. I see two primary things to think about -

One - which I've already mentioned, though perhaps not in enough detail for you to realize this is what I was talking about - is whether the variance is increasing more quickly or more slowly than the mean is (if it's more quickly, it suggests negative binomial, if its more slowly it suggests binomial).

The second - in my mind somewhat weaker consideration - thought is that if the variable has no natural upper bound, it might incline us more toward the negative binomial, while if it does, it would incline us toward the binomial.

How could I evaluate this in my empirical distribution, since I only have one measurement of the mean and the variance?

Ah, I was thinking - though without sufficient reason to do so - that with multiple questions there were natural subgroups of questions that would yield multiple means and variance. I guess I'd start with looking at extensions of the binomial (including, perhaps, beta-binomial), but I'd also see how negative binomial fitted.

Not the answer you're looking for? Browse other questions tagged distributions count-data overdispersion or ask your own question.