I'm having some trouble interpreting the shape of this distribution. It is a distribution of price differences between an estimate and actual price. There are 219 points. I'm not sure if I can call it Gaussian or if it is heavy tailed or light tailed. The shapiro-wilk test for normality gave me a significant p-value of 1.96e^-5. While the KS-test(using a second normal distribution with he same mean and sd) gave me an insignificant p-value. (0.14). How an I go about finding a an appropriate distribution this can be described with? 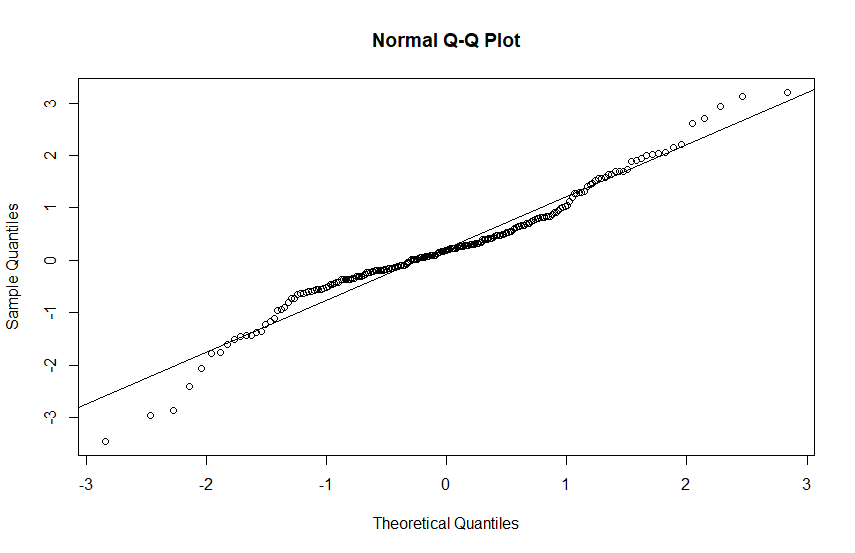 The null hypothesis for a Shapiro-Wilk test is that the population from which a sample was randomly sampled has some normal distribution (parameters unspecified). By contrast, $H_0$ for our Kolmogorov-Smirnov test is that the population is normal with specified $\mu$ and $\sigma.$ (If you estimate $\mu$ by $\bar X$ and $\sigma$ by $S,$ the P-value needs to be adjusted.)

Here is an example of normal Q-Q plots and tests for samples of size $n=250$ from normal and heavy tailed $\mathsf{T}(\nu=2)$ distributions. Because you show a Q-Q plot with Sample Quantiles on the vertical axis (default in R), that is the type of Q=Q plots I show.

Normal data. The sample is of moderate size so the tests work well. Neither S-W nor K-S for $\mathsf{Norm}(0.1) rejects.

Heavy-tailed $\mathsf{T}(\nu=2)$ population. This distribution has such heavy tails that it has no variance (or standard deviation), so we do not show its sample standard deviation in the summary. Notice max and min both far from $\mu=0.$

Normal probability plots of the two samples. Many statisticians prefer to judge normality "by eye," using Q-Q plots, rather than by using formal tests.

One expects normal data to yield a "nearly" linear pattern of points, perhaps staying near a reference line based on upper and lower quartiles. However, in the tails were data is sparse one does not expect the data points to follow the reference line closely. There is no question that the sample from the heavy-tailed distribution fails to yield a "linear" plot. 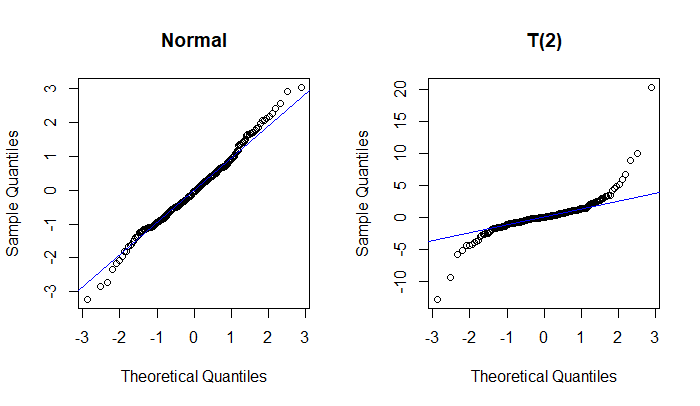 Finally, we show normal probability plots for two additional samples of size 250 from these same distributions. 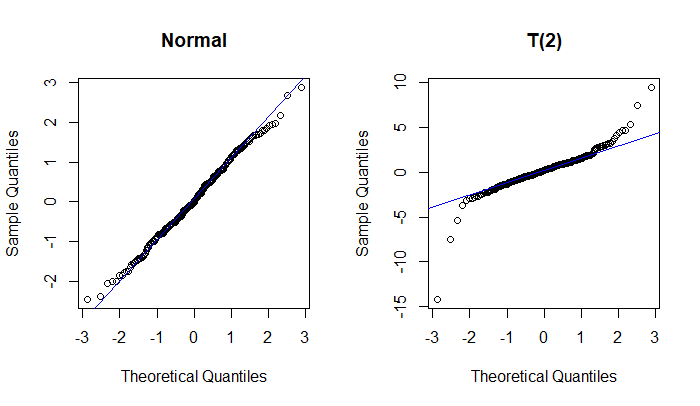 Not the answer you're looking for? Browse other questions tagged normal-distribution qq-plot heavy-tailed or ask your own question.

2
Can a two-sample t-test be used with data that doesn't follow a normal distribution?
13
Testing large dataset for normality - how and is it reliable?
4
Are two asymptotic values enough to fail the test of normality?
0
Appropriate to fit lognormal model to data with heavy tail?
0
are my residuals normally distributed?
6
Can we ALWAYS assume normal distribution if n >30?
1
How do I interpret graphs of residuals to check if the assumptions of lm() / anova() are met?