I am aware a similar question was asked here Interpreting forecast predictions of log transformed data.

I have a time series and want to make forecast. I found that taking the log of my series (all positive values), helps with my increasing variance over time. If my first difference series is stationary, when I make a forecast with ARIMA(p,1,q), is it safe to take the exponential of my predictions, so to get my predictions back in levels? What problems are there with this procedure?

The variance adjustment comes from the equation for the mean of the lognormal distribution $\xi\sim\mathcal{logN}(0,\sigma^2)$ where $E[\xi]=e^{\sigma^2/2}$. So, strictly, you shouldn't be using it unless your errors are normal. Since you mentioned ARIMA it's likely that you already assume normal errors because that's what standard packages do unless told otherwise.

If you knew the true variance $\sigma_{\Delta}^2$ of the process then the latter would have been the only option. Unfortunately, you don’t know the true variance. So, you have to pick one of the above options.

Some practitioners think that it is better to use the former because variance adjustment is not worth the trouble with estimated variance $\hat\sigma_{\Delta}^2$: it introduces its own error. Fortunately, the variance is usually not large enough to matter and you get about the same answers in both options.

To me the whole problem can be avoided by not making a point forecast, and instead proceed with the distribution forecast. In other words don't give your users one number, give them a distribution of the projections. If you are using the standard ARIMA packages then the simplest way to do this is to use their standard facilities, e.g. filter function does it MATLAB, where you supply random disturbances and get back the random paths, from which you can construct neat fan charts, like the ones used by BOE's inflation report. 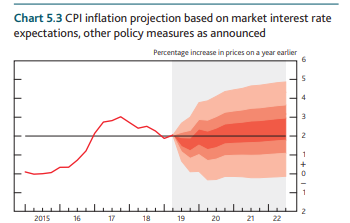 Not the answer you're looking for? Browse other questions tagged time-series forecasting arima data-transformation logarithm or ask your own question.

1
time series forecasting using auto.arima and exponential smoothing
5
Forecasting Time Series: Stationary vs Non-Stationary
2
Forecasting with ARIMA and GARCH: does my plan look alright?
1
I have a time series data with date and revenue columns. That is daily data. I need to forecast revenue for next 365 days
0
Does Mean and Variance Stationary need to be applied to all kinds of forecast models in time series data?
1
Anything wrong with taking the log of an interest rate?