Relation between AUROC and threshold

My guess is that AUROC estimates expected proportion of new data for which positive classes will be scored higher, than negative classes, and threshold can't change that wildly because we expect the data we use during the training to be representative. But I'm not sure.

I examined this site, but wasn't able to find an answer to this particular question. Can you answer it or just show me the direction where I'm wrong?

EXTRA: some pictures, illustrating my question. 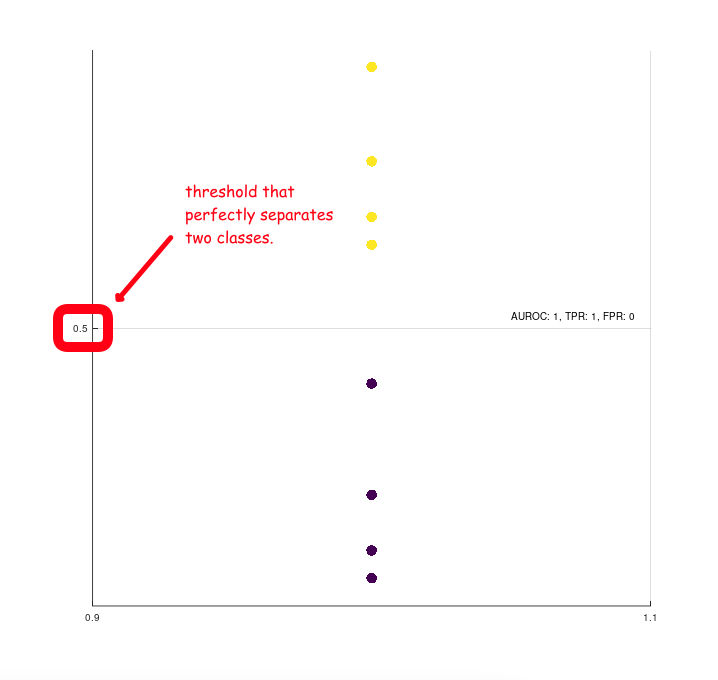 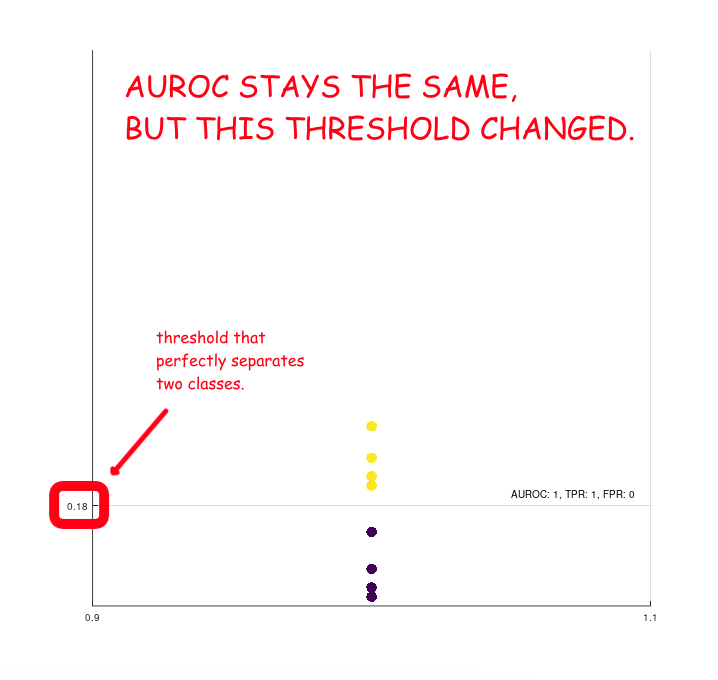 It will be more enlightening to use the definition of the AUROC than a derivative property like the probabilities of positive/negative classes at certain threshold levels.

Recall that the AUROC is defined as double the area under the precision/recall curve as the threshold varies over all possible values. Thus, the AUROC has nothing to do with specific threshold values, since we integrate the threshold out when calculating the AUROC by straightforward integration.

Next, recall how the precision-recall curve looks like if there is a threshold that perfectly separates your data: it goes from (0,0) to (0,1) and then to (1,1). The specific value of the separating threshold only enters as the point where the parameterized curve jumps to (0,1).

Thus, if you have two different models (or datasets), each of which has a separating threshold, the precision-recall curves are identical. And therefore, so is the AUROC (and it is always 1).

Finally, therefore the AUROC is no help in determining an "optimal" threshold. There are various ways of doing so based on the original precision-recall curve (essentially as a tradeoff between precision and recall), but these also break down in degenerate cases - and in any case I would argue that any determination of thresholds that is solely based on the statistics is mistaken.

Not the answer you're looking for? Browse other questions tagged machine-learning classification roc auc threshold or ask your own question.

67
Reduce Classification Probability Threshold
23
What does it mean that AUC is a semi-proper scoring rule?
0
AUC with different threshold

8
Decision threshold for a 3-class Naive Bayes ROC curve
1
Classification, create a grey zone
7
Change threshold of classifier based on ROC
3
How to Interpret AUROC score?
3
My machine learning models have reproducible results generally, but not at specific classification thresholds. What does this mean?
9
Can any data be learned using polynomial logistic regression