Recently, I came across the use of Gaussian Mixture Distributions being used to model the response variable in a regression setting: 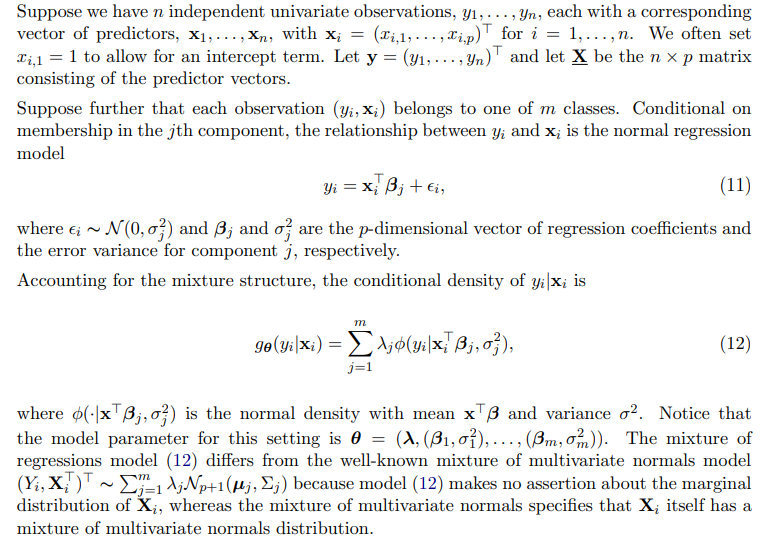 Mixture distributions make the most sense if we have grounds to suspect that the data belong to multiple different subpopulations, as per the textbook you cite. Usually, we don't know which of the subpopulation a given instance belongs to - and we may not even know how many such subpopulations exist.

As such, we could even consider straightforward ANOVA as a kind of mixture model, where we are only interested in the subpopulation means, and where we already know which subpopulation a given instance belongs to.

Another common example of mixture models are zero-inflated and related (e.g., hurdle) models/distributions. The idea is that there are two underlying processes, one resulting in a zero observation and the other in some other observation (which may be zero itself, or constrained to be non-zero). For instance, you could model supermarket sales that way: either nobody demanded the product, or someone did demand it and then possibly bought multiple units.

Then again, there are many situations where non-mixture models are appropriate, but rather things like GLMs. If you want to model something that is inherently positive, you can use gamma regression. You can use negative binomial regression for those supermarket sales. Are gamma or negbin distributions already "irregular"? I wouldn't say so.

So, to summarize, I would say that mixtures are good precisely when your data exhibits a specific kind of regularity, namely hypothesized subpopulations. It's definitely not the go-to tool if you have "just any kind of irregularity". (What do you do with "irregular" data? You try to understand it better to find out which tool is appropriate.)

Not the answer you're looking for? Browse other questions tagged r regression probability distributions gaussian-mixture-distribution or ask your own question.

4
In regression, which distribution will have the largest standard deviation?
1
What is the origin of squaring centred data as way to model variances instead of means?
14
Should I use unpenalized logistic regression, lasso or ridge for explanatory modelling?
0
References and Software Implementations for Multi-Response Modelling
0
Summarizing Non-Normal Probability Distributions