I am running a binary logistic regression for my data using mini-tab. I feel as though I am doing something wrong because the p-values given for each of binary categories for an independent variable are the exact same number. But, this doesn't make sense as the numerical inputs are not the same.

For example: Male to Female the p value is exactly the same But, when looking at the actual data counts input it is as follows: Male: 210 likely, 41 not likely Female: 239 likely, 20 not likely

While both male and female are the same independent variable (gender) I feel like I must be doing something wrong because how could those p-values be the same in relation to significance of predictability of an event to likely occur or not when the values are not identical. 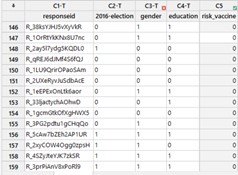 8
Can binary data be ordinal?
0
Categorical data with values
0
How to analyze contingency table for multiple responses in SPSS or JASP?
1
Logistic regression yields very small p-values for any/every explanatory variable in my dataset
3
Is my interpretation correct? - Independence of binary predictors in multiple linear regression
2
Examples showing the difference between dummy variables and binary variables?