In R, find function F(x) to transform values in a vector to a normal distribution?

I have a PDF (Probability Density Function) generated from a vector of 1,000,000 empirical values. This empirical PDF is heavily skewed to the right.

In this form, I can't make accurate predictions using a linear regression.

To fix this, is there some method to find the function F(x) to transform (i.e. "squash") the values in the vector into a standard normal distribution, so I can feed said transformed vector into a linear regression?

Of course, this would also involve finding the inverse of F(x) that transforms (i.e. "de-squashes") any predictions back into the original empirical PDF.

What I have tried

So far, I have managed to generate the density function from the empirical data: 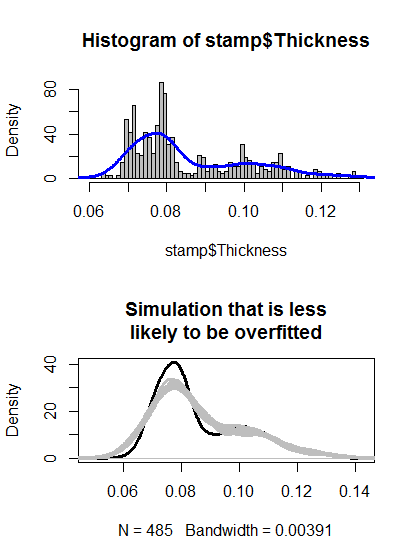 What need to have normal distribution are the residuals (predicted versus observed) derived from your (multiple) linear regression model.

After fitting the regression line, it is important to investigate the residuals to determine whether or not they appear to fit the assumption of a normal distribution. A normal quantile plot of the standardized residuals y - is shown to the left. Despite two large values which may be outliers in the data, the residuals do not seem to deviate from a random sample from a normal distribution in any systematic manner.

See Left skewed vs. symmetric distribution observed for R code that illustrates that the only relevant concern is if the residuals are normally distributed.

@AndreSilva is right that regression does not require the data to be normal. The assumption of linear regression is that the residuals are normal. It may help to read this thread: what-if-residuals-are-normally-distributed-but-y-is-not, to clarify this issue.

However, this point does not go far enough. First, the normality of the residuals serves to ensure that you can trust the standard p-values that software outputs. Even then, you can trust your p-values without normal residuals, if your N is sufficiently large. With $N>1,000,000$, there is likely to be little reason to worry about the validity of your p-values.

Your data do not need to be "Normal". What need to have normal distribution are the residuals (predicted versus observed) derived from your (multiple) linear regression model. Did you test this presupposition?

In some cases, for instance a one-way ANOVA, you can separately check normality by drawing a histogram of the $y_i$ in each group of individuals defined by the factor because the model assumes the $y_i$ are normal and i.i.d in each group. If the group sizes are small it is better to check normality with the residuals.

Not the answer you're looking for? Browse other questions tagged r regression normal-distribution density-function .

130
What if residuals are normally distributed, but y is not?
12
Left skewed vs. symmetric distribution observed