I have a fairly simple question regarding the interpretation of the F-test in Microsoft Excel.

Let't say these are the results of my F-test: 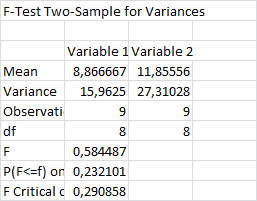 I am now wondering how to interpret it in order to choose the correct t-test (assuming equal or unequal variances) for my data-set.

I have found guides telling me if F critical > F, then use unequal variances. However, some of the guides tell you to use only the p value, so I am unsure which parameters to look at when interpreting the results.

1) When doing hypothesis tests, the decision is the same whether you use p-values or critical values (if it isn't, you did something wrong, or at least inconsistent).

2) When sample sizes are equal, the t-test (or ANOVA) is less sensitive to differences in variance.

3) You shouldn't do a formal equality of variance test to work out whether or not to assume equal variances; the resulting procedure for testing equality of means doesn't have the properties you'd likely wish it did. If you're not reasonably comfortable with the equal variance assumption, don't make it (if you like, assume the variances are always different unless you have some reason to think they're going to be fairly close). The t-test (and ANOVA) procedures aren't highly sensitive to small to moderate differences in population variance, so with equal (or nearly equal) sample sizes you should be safe whenever you're confident they're not highly different.

Which is to say, if you're able to do a Welch-type test or similar, you may be better off just to do so. It will never cost you much, it may save a lot. (In your particular situation in this case, you are probably safe enough without it - but there's no particular reason not to do it.)

I'll note that R by default uses the Welch test when you try to do a two-sample t-test; it only does the equal-variance version when you tell it to. I think this is the right way to do it (to do the safer thing by default), if only to save us from ourselves.

If you want to know more about the meaning and calculation of the F test when used as a criterion for the analysis of variance (ANOVA) with examples in Excel, I recommend this series of four articles. The final formula is able to take into account the size of alpha, the number of degrees of freedom for the F ratio's numerator and denominator, and the noncentrality parameter.

Conclusion: if F > F Critical one-tail, we reject the null hypothesis. That means the variances of the two populations are unequal.

Not the answer you're looking for? Browse other questions tagged variance t-test excel descriptive-statistics f-test or ask your own question.

1
We should verify first if the variances are equal with F-test before verify if the means are equal with t-test?
3
P-value of F-test to compare two variances (var.test in R)
1
P-value multiplied by 2 for two tail hypotheses F-test

3
What statistical test is appropriate when comparing heart rates from different devices?
0
Did I pick the right t-test based on the results from the F-test?
0
Excel: Still have to use the normal approximation with GAMMA.INV for high values of alpha?
0
How to say whether the variances of multiple groups are different?
1
Papers About Permutation Version of Welch's t-test
3
Test for equality of variances same as testing for equality of means under specific conditions