Why is the Median Less Sensitive to Extreme Values Compared to the Mean?

I am sure we have all heard the following argument stated in some way or the other:

Using the R programming language, we can see this argument manifest itself on simulated data:

We can also plot this to get a better idea: 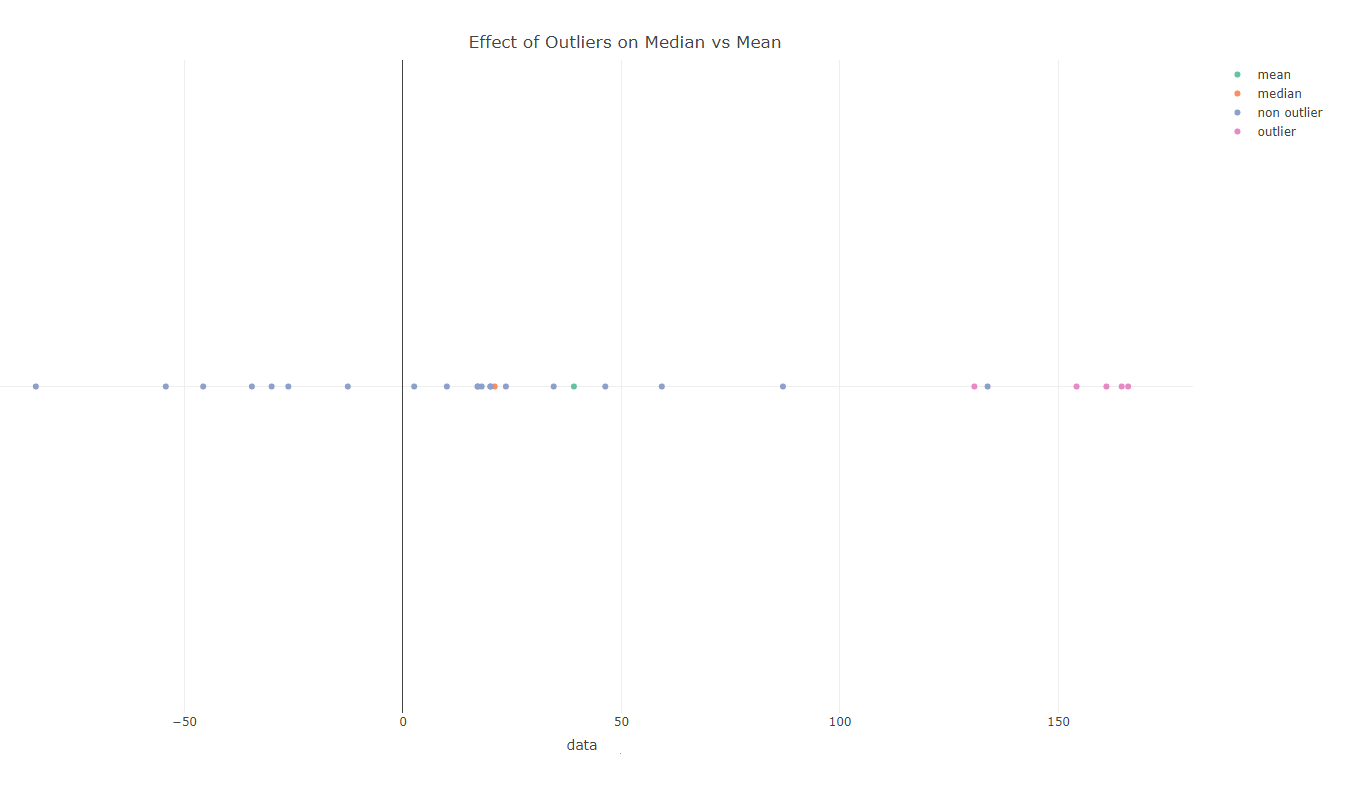 Apart from the logical argument of measurement "values" vs. "ranked positions" of measurements - are there any theoretical arguments behind why the median requires larger valued and a larger number of outliers to be influenced towards the extremas of the data compared to the mean?

I am aware of related concepts such as Cooke's Distance (https://en.wikipedia.org/wiki/Cook%27s_distance) which can be used to estimate the effect of removing an individual data point on a regression model - but are there any formulas which show some relation between the number/values of outliers on the mean vs. the median?

Are there any theoretical statistical arguments that can be made to justify this logical argument regarding the number/values of outliers on the mean vs. the median?

this is assuming that the outlier $O$ is not right in the middle of your sample, otherwise, you may get a bigger impact from an outlier on the median compared to the mean.

you may be tempted to measure the impact of an outlier by adding it to the sample instead of replacing a valid observation with na outlier. it can be done, but you have to isolate the impact of the sample size change. if you don't do it correctly, then you may end up with pseudo counter factual examples, some of which were proposed in answers here. I'll show you how to do it correctly, then incorrectly.

Now, we can see that the second term $\frac {O-x_{n+1}}{n+1}$ in the equation represents the outlier impact on the mean, and that the sensitivity to turning a legit observation $x_{n+1}$ into an outlier $O$ is of the order $1/(n+1)$, just like in case where we were not adding the observation to the sample, of course. Note, that the first term $\bar x_{n+1}-\bar x_n$, which represents additional observation from the same population, is zero on average.

a counter factual, that isn't

The analysis in previous section should give us an idea how to construct the pseudo counter factual example: use a large $n\gg 1$ so that the second term in the mean expression $\frac {O-x_{n+1}}{n+1}$ is smaller that the total change in the median. Here's one such example: "... our data is 5000 ones and 5000 hundreds, and we add an outlier of -100..."

a counter factual, that is

Now, what would be a real counter factual? In all previous analysis I assumed that the outlier $O$ stands our from the valid observations with its magnitude outside usual ranges. These are the outliers that we often detect. What if its value was right in the middle?

In this example we have a nonzero, and rather huge change in the median due to the outlier that is 19 compared to the same term's impact to mean of -0.00305! This shows that if you have an outlier that is in the middle of your sample, you can get a bigger impact on the median than the mean.

Note, there are myths and misconceptions in statistics that have a strong staying power. For instance, the notion that you need a sample of size 30 for CLT to kick in. Virtually nobody knows who came up with this rule of thumb and based on what kind of analysis. So, it is fun to entertain the idea that maybe this median/mean things is one of these cases. However, it is not. Indeed the median is usually more robust than the mean to the presence of outliers.

A reasonable way to quantify the "sensitivity" of the mean/median to an outlier is to use the absolute rate-of-change of the mean/median as we change that data point. To that end, consider a subsample $x_1,...,x_{n-1}$ and one more data point $x$ (the one we will vary). If we denote the sample mean of this data by $\bar{x}_n$ and the sample median of this data by $\tilde{x}_n$ then we have:

In the trivial case where $n \leqslant 2$ the mean and median are identical and so they have the same sensitivity. In the non-trivial case where $n>2$ they are distinct. In this latter case the median is more sensitive to the internal values that affect it (i.e., values within the intervals shown in the above indicator functions) and less sensitive to the external values that do not affect it (e.g., an "outlier").

Adding an outlier, or moving a "normal" point to an extreme value, can only move the median to an adjacent central point. For instance, if you start with the data [1,2,3,4,5], and change the first observation to 100 to get [100,2,3,4,5], the median goes from 3 to 4. So not only is the a maximum amount a single outlier can affect the median (the mean, on the other hand, can be affected an unlimited amount), the effect is to move to an adjacently ranked point in the middle of the data, and the data points tend to be more closely packed close to the median. So, for instance, if you have nine points evenly spaced in Gaussian percentile, such as [-1.28, -0.84, -0.52, -0.25, 0, 0.25, 0.52, 0.84, 1.28]. The average separation between observations is 0.32, but changing one observation can change the median by at most 0.25. The median of a bimodal distribution, on the other hand, could be very sensitive to change of one observation, if there are no observations between the modes.

Below is an illustration with a mixture of three normal distributions with different means.

The value of $\mu$ is varied giving distributions that mostly change in the tails. 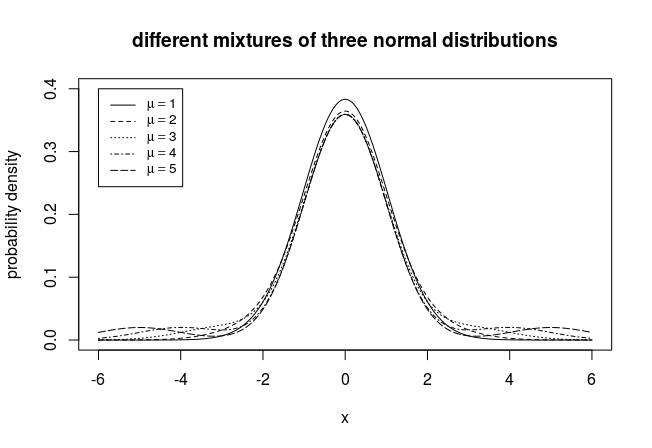 The consequence of the different values of the extremes is that the distribution of the mean (right image) becomes a lot more variable.

Example where the mean is less influenced by outliers

In general we have that large outliers influence the variance $Var[x]$ a lot, but not so much the density at the median $f(median(x))$.

Btw "the average weight of a blue whale and 100 squirrels will be closer to the blue whale's weight"--this is not true.

Let's assume that the distribution is centered at $0$ and the sample size $n$ is odd (such that the median is easier to express as a beta distribution).

Below is a plot of $f_n(p)$ when $n = 9$ and it is compared to the constant value of $1$ that is used to compute the variance of the sample mean. 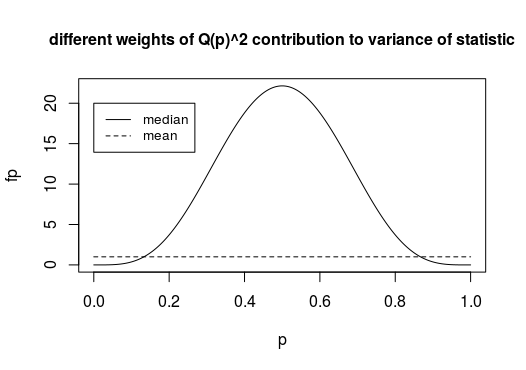 What the plot shows is that the contribution of the squared quantile function to the variance of the sample statistics (mean/median) is for the median larger in the center and lower at the edges.

When we change outliers, then the quantile function $Q_X(p)$ changes only at the edges where the factor $f_n(p) < 1$ and so the mean is more influenced than the median.

When we add outliers, then the quantile function $Q_X(p)$ is changed in the entire range. So the median might in some particular cases be more influenced than the mean.

Below is an example of different quantile functions where we mixed two normal distributions. 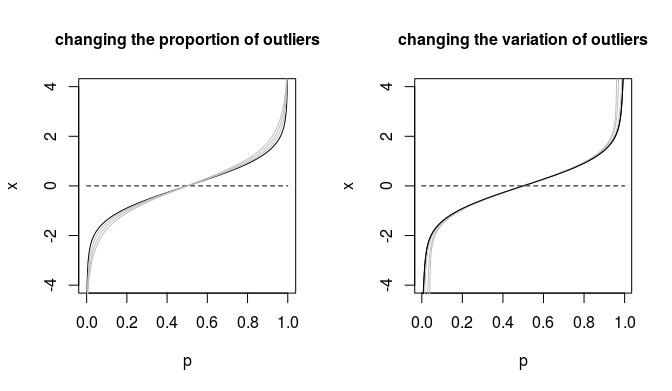 The quantile function of a mixture is a sum of two components in the horizontal direction. Whether we add more of one component or whether we change the component will have different effects on the sum.

A helpful concept when considering the sensitivity/robustness of mean vs. median (or other estimators in general) is the breakdown point. This is the proportion of (arbitrarily wrong) outliers that is required for the estimate to become arbitrarily wrong itself.

Using this definition of "robustness", it is easy to see how the median is less sensitive: At least HALF your samples have to be outliers for the median to break down (meaning it is maximally robust), while a SINGLE sample is enough for the mean to break down.

I'm going to say no, there isn't a proof the median is less sensitive than the mean since it's not always true. At least not if you define "less sensitive" as a simple "always changes less under all conditions". I'm told there are various definitions of sensitivity, going along with rules for well-behaved data for which this is true.

That seems like very fake data. So say our data is only multiples of 10, with lots of duplicates. It could even be a proper bell-curve. Then it's possible to choose outliers which consistently change the mean by a small amount (much less than 10), while sometimes changing the median by 10. Or simply changing a value at the median to be an appropriate outlier will do the same.

If feels as if we're left claiming the rule is always true for sufficiently "dense" data where the gap between all consecutive values is below some ratio based on the number of data points, and with a sufficiently strong definition of outlier.

Actually, there are a large number of illustrated distributions for which the statement can be wrong!

Background for my colleagues, per Wikipedia on Multimodal distributions:

Here is another educational reference (from Douglas College) which is certainly accurate for large data scenarios:

So, evidently, in the case of said distributions, the statement is incorrect (lacking a specificity to the class of unimodal distributions).

Ironically, you are asking about a generalized truth (i.e., normally true but not always) and wonder about a proof for it. If you want a reason for why outliers TYPICALLY affect mean more so than median, just run a few examples. Your light bulb will turn on in your head after that.

Again, did the median or mean change more? No matter what ten values you choose for your initial data set, the median will not change AT ALL in this exercise! You can use a similar approach for item removal or item replacement, for which the mean does not even change one bit. Clearly, changing the outliers is much more likely to change the mean than the median.

Others with more rigorous proofs might be satisfying your urge for rigor, but the question relates to generalities but allows for exceptions. So, you really don't need all that rigor. There are exceptions to the rule, so why depend on rigorous proofs when the end result is, "Well, 'typically' this rule works but not always...". The example I provided is simple and easy for even a novice to process.

Not the answer you're looking for? Browse other questions tagged mathematical-statistics mean outliers median robust or ask your own question.

21
Mean and Median properties
6
Should we always minimize squared deviations if we want to find the dependency of mean on features?
10
Solution to exercice 2.2a.16 of "Robust Statistics: The Approach Based on Influence Functions"
4
Compute quantile function from a mixture of Normal distribution
1
The expectation of a function of the sample mean in terms of an expectation of a function of the variable $E[g(\bar{X}-\mu)] = h(n) \cdot E[f(X-\mu)]$

96
If mean is so sensitive, why use it in the first place?
4
How to estimate the parameters of a Gaussian distribution sample with outliers?
103
Mean absolute error OR root mean squared error?
8
Median + MAD for skewed data
1
What is the best way to determine which proteins are significantly bound on a testing chip?
4
Iterative outlier diagnostic