How do I color the points provided in cox.zph plot? [closed]

Ask Question
Asked 5 months ago
Modified 5 months ago
Viewed 77 times
0
$\begingroup$
This question appears to be off-topic because it focuses on programming, debugging, or performing routine operations, or it asks about obtaining datasets. You could try the support links we maintain or the Open Data site instead.

I'm trying to distinguish between the two groups in this scaled Schoenfeld residuals plot: 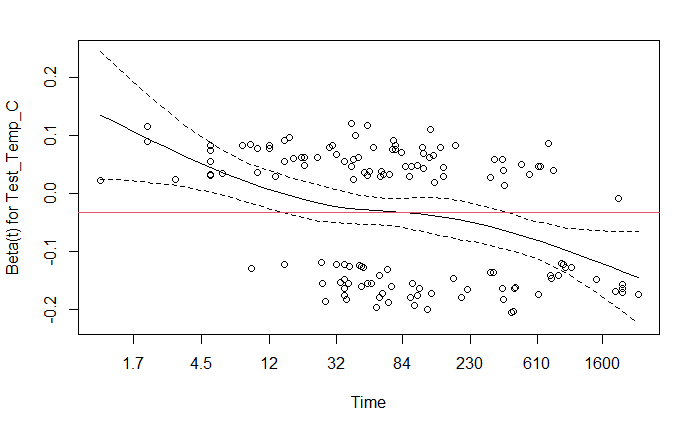 As you can see there are two groups for test temperature which I am hypothesizing are split based on 340 C and 320 C. I would like to color the points based on the test temperature from my data frame, how would I do this in R? Just as an aside, would you say the better strategy is to stratify or add a time-dependent term based on the plot? I'm leaning toward stratify.

For the statistical part of the question, if you don't care about modeling the effect of Test_Temp_C itself, stratification is often a good choice for a binary or factor predictor with a small number of values. You might want to think, however, if there's something important hiding in the observation that this predictor is associated with greater hazard at early times but less hazard at later times. That said, the associate hazards (on the order of +/- 10-20%) might be too small to matter in your study.

For visualization, a cox.zph object contains a component x that represents the transformed time axis, a component time that contains the original event-time values, and a matrix y of scaled Schoenfeld residuals. You could extract the relevant values from the object into a data frame, pull out the categorical covariate values that apply at each event time from your data, and color points by generating a plot yourself and specifying in the plot command a point color based on the value of your binary covariate, something like col=c("red","blue")[1+Test_Temp_C=="320"] with basic R graphics.* If there are no tied event times that should be straightforward. If there are ties, you will have to determine which of the cases has which of the residual values by looking directly at the residuals of the coxph object.

*The col argument in plot.cox.zph() is for the curve, not for the points. There are more elegant ways to do such coloring with ggplot(), and you might consider starting with the survminer package and its ggcoxdiagnostics() function to get a plot similar to yours, then do the point coloring with an added geom_point() command.

Not the answer you're looking for? Browse other questions tagged r survival cox-model stratification schoenfeld-residuals or ask your own question.

1
Validity of PH test using Schoenfeld residuals from Cox model on parametric models
3
Generating random survival values using Cox model estimates
2
Is the proportional hazards assumption violated (interpreting Schoenfeld residuals)? What is my best option if so?
0
Cox PH non-proportionality: time-dependent variable?
1
How do I distinguish between points created in cox.zph()?
0
Interpreting the plot of residuals for a cox proportional-hazards model and informative censoring
0
Partitioning survival data into prognostic groups