Why is my highest coefficient not significant but lower ones are? (Poisson regression)

However, the 21.3% decrease is not significant, and the 4.03% increase is significant. I'm wondering if this is incorrect/whether I have done something wrong? I am aware I may be confused about how statistical significance works, so just want to check whether the below makes sense!

The R outputs for estimates and p-values look like this:

Essentially, is it okay that the larger effect is not statistically significant, but the smaller effect is? It just feels wrong!

low (vs. high) has a restricted range (i.e., only 2 values). Number of children presumably has a much wider range. The narrower the range of an $X$ variable, the less power there is to test it. That's a general principle. Specific to this example, it sounds like the underlying variable (income) was subjected to a median split, or something similar. If so, you should be aware that categorizing a continuous variable has long been considered poor statistical practice.

Significance is not purely about the magnitude of an effect. For instance, if the parameter/effect is $1$ light-year or $9.46×10^{12}$ km, then it is different figures but the same distance.

Significance is an expression of the magnitude of an observed effect size in terms of how likely or unlikely it is to have an at least as strong deviation from the value predicted by some null hypothesis, given that the null hypothesis is true.

When this probability is low then you might consider the effect as an anomaly from the point of view of the null hypothesis. If you detect an effect with a small magnitude to be an anomaly, but an effect with a large magnitude is not, then it means that the experiment has different sensitivity for the two effects.

is it okay that the larger effect is not statistically significant, but the smaller effect is? It just feels wrong!

It depends on the relative effect size. Relative to the error of the estimate and this might be different for the two coefficients.

The slope is a smaller effect size if you compare the plain figures like 0.095 < 1.724. But the slope has a much smaller variation from sample to sample, and such a small effect is significant. 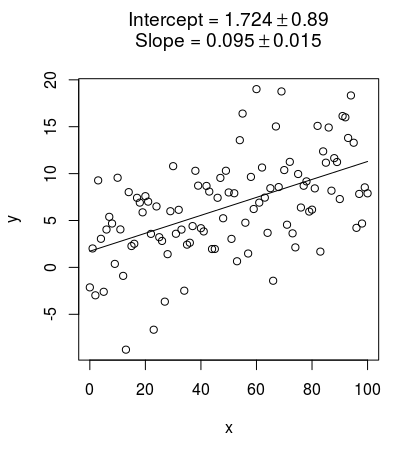 Not the answer you're looking for? Browse other questions tagged r statistical-significance p-value interpretation poisson-regression or ask your own question.