Why are rating distributions 'smoother' when there are more players?

Consider the following rating distributions by variant/time control on lichess.

The bullet, blitz and rapid rating distributions look very, well, 'smooth' (or holomorphic/analytic or harmonic or uniformly continuous or integrable or square integrable or right continuous whatever you want) like as if they were an actual probability distribution. They have at least 300k users each. 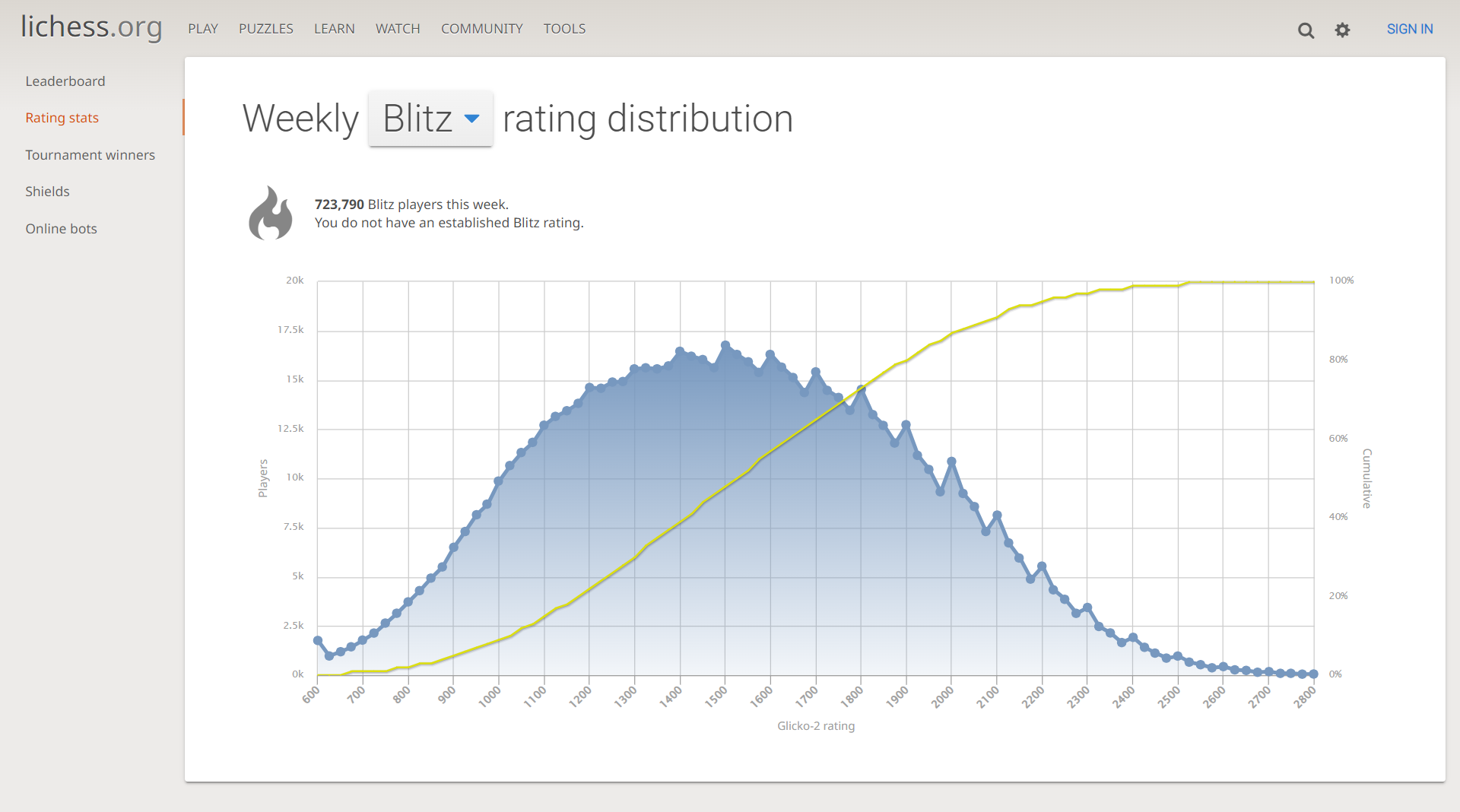 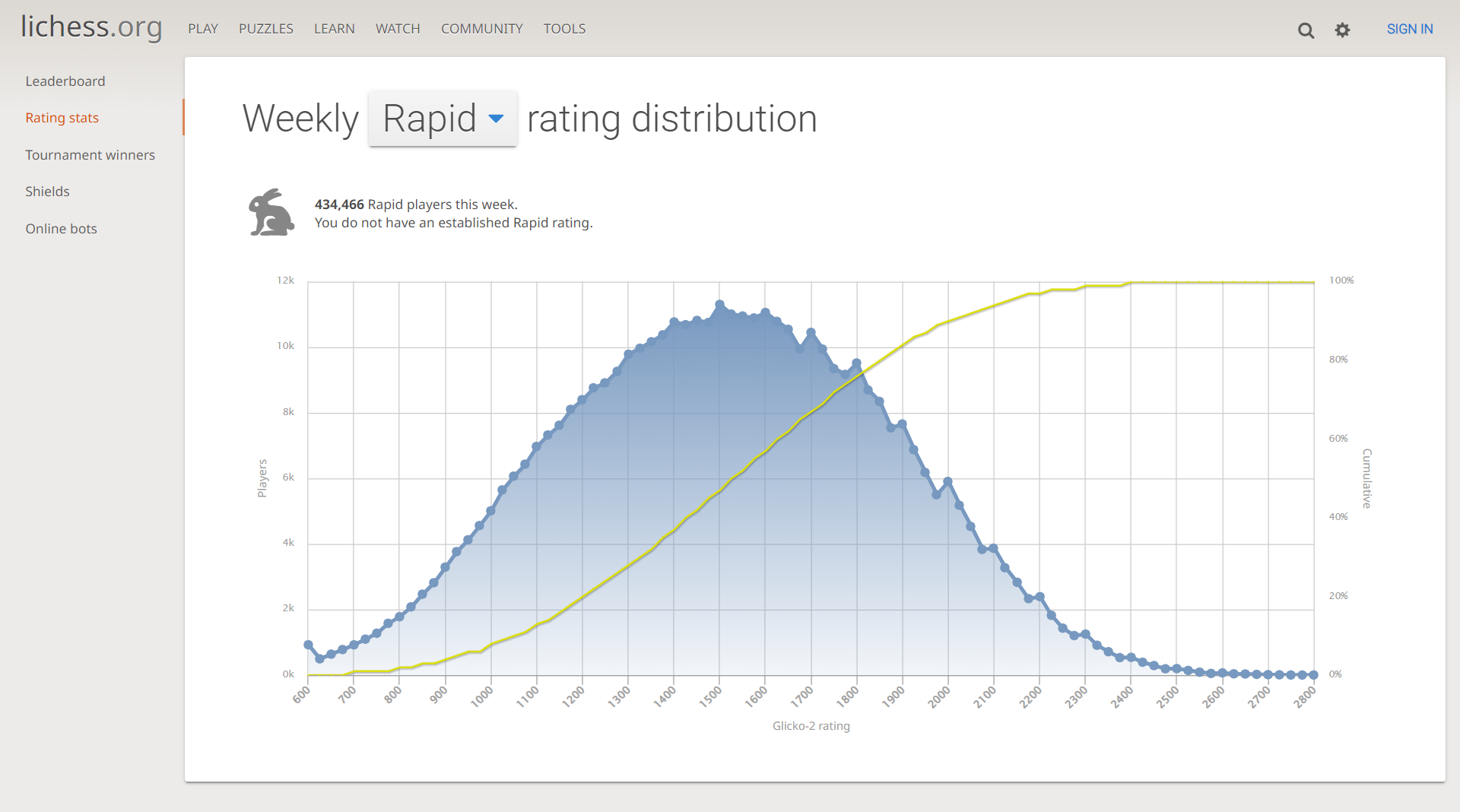 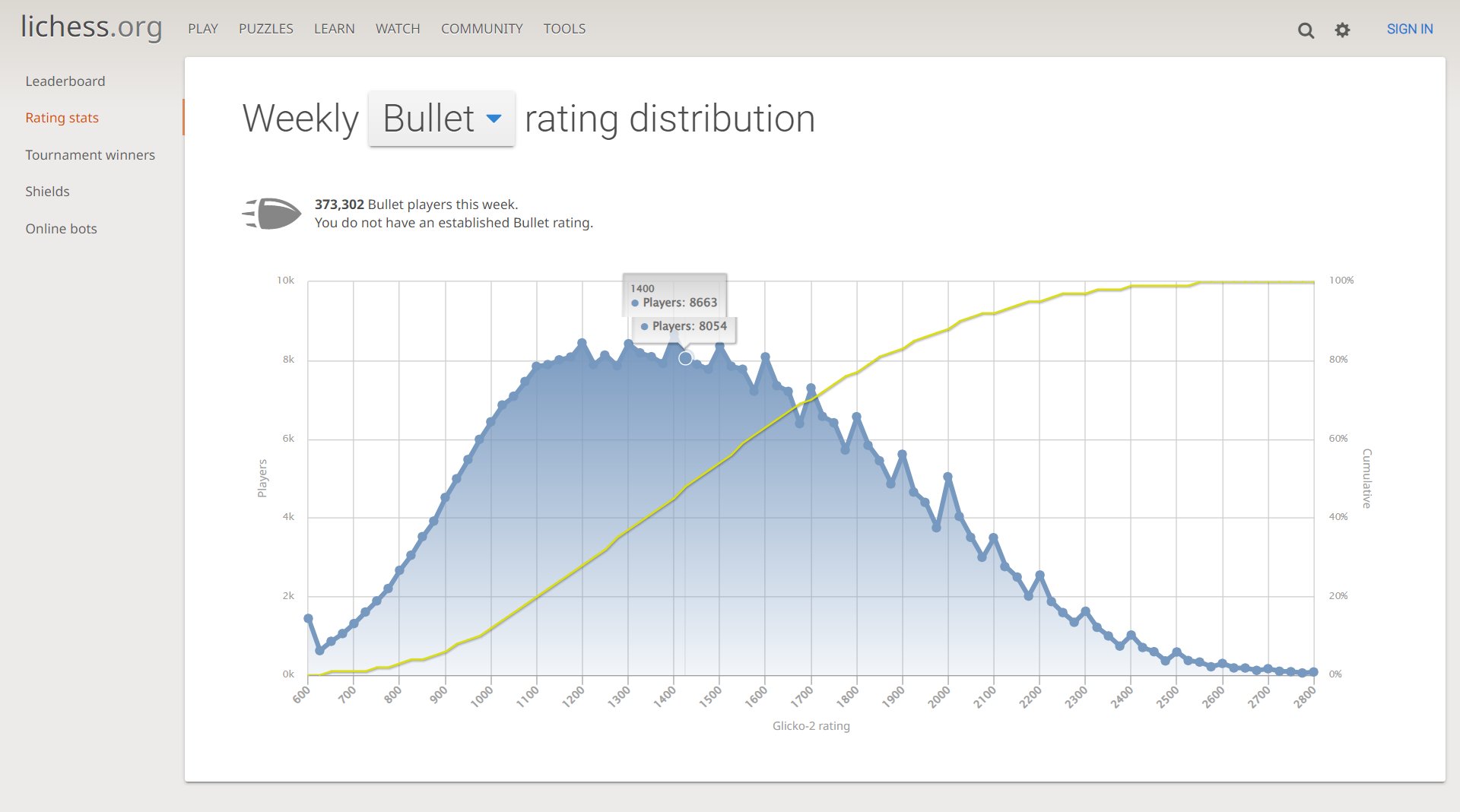 However ultra bullet doesn't look so smooth. Only 17k users. 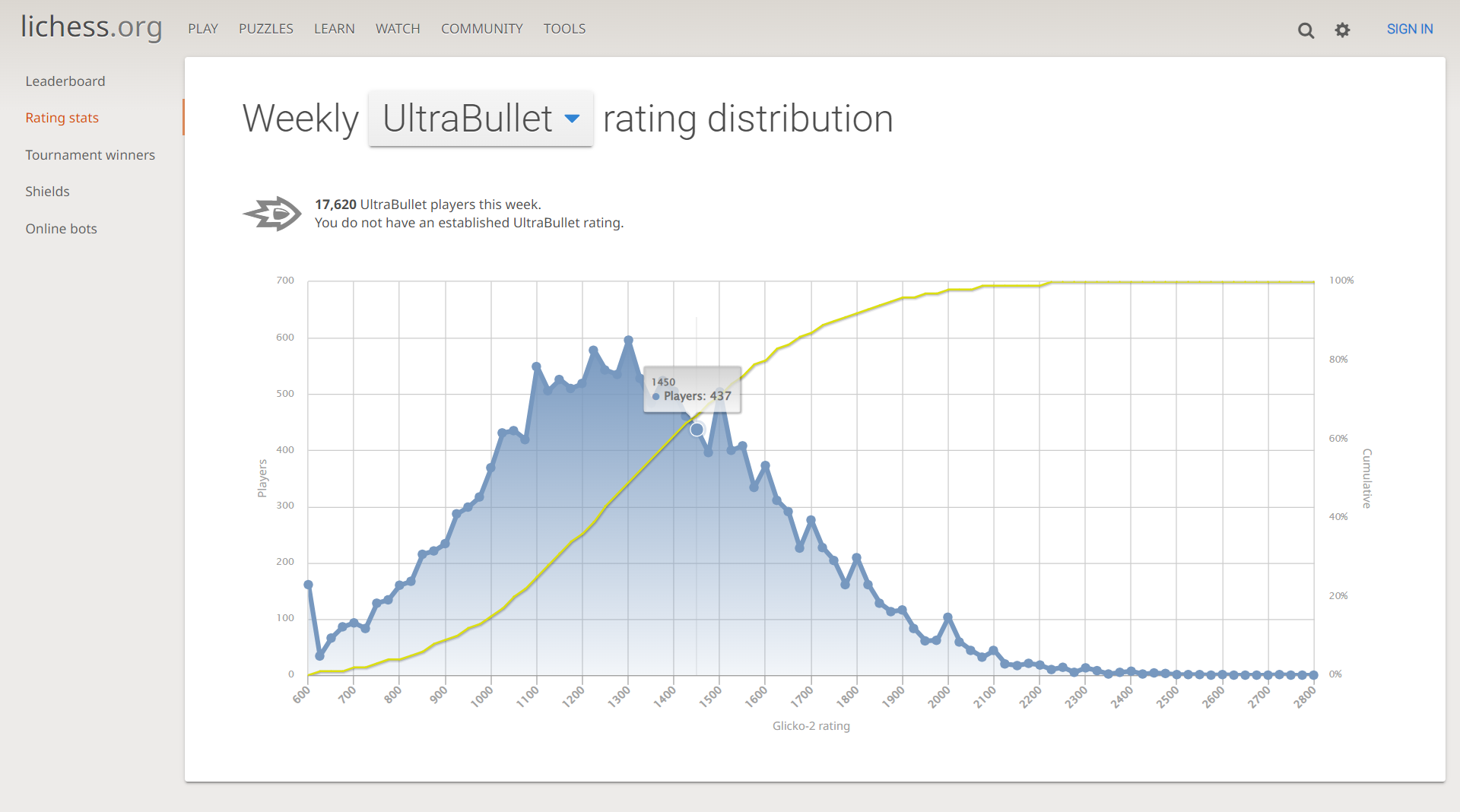 Similarly, 9LX (this time, this is a different variant instead of a time control. Here, time control isn't taken into account. So this can be 9LX rapid, 9LX blitz, 9LX bullet, 9LX ultrabullet, etc) isn't so smooth. Only 12k users. (Actually a surprise to me. Almost each week of past several months I've seen it at most 10k. Btw, relevant?) 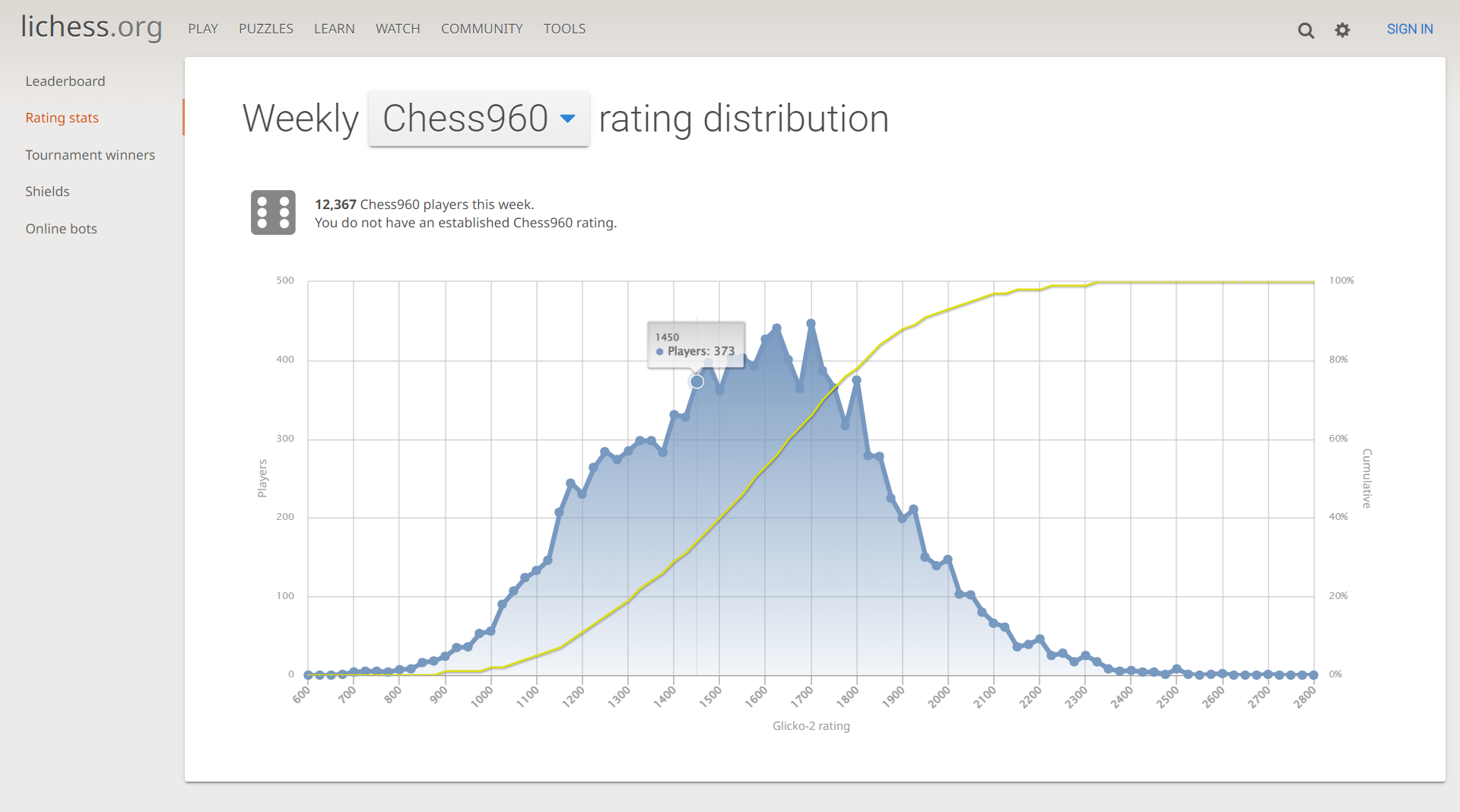 The question "What's the idea behind how more players means smoother?" invites us to explore the visual impression of smoothness of histograms obtained from larger and larger samples of a distribution that has a smooth density function.

To study the situation, suppose we fix a set of bins delimited by cutpoints once and for all, so that we aren't confused by the effects of changing bin widths. What this means is we will partition the real numbers according to a finite sequence of distinct values

Given any dataset of numbers $(x_1, x_2, \ldots, x_n),$ all of which lie in the interval $(c_1, c_b]$ covered by the finite-width bins, we may construct a histogram to depict the relative frequencies of these numbers. The bin counts

Let the fixed underlying distribution be a continuous one with a piecewise continuous density function $f.$ Suppose the numbers $(x_1, \ldots, x_n)$ are a random sample from this distribution (restricted, if necessary, to those values lying within the finite portion of the histogram from $c_0$ through $c_b$). By definition of $f,$ the chance that any particular random value $X$ drawn from this distribution lies in bin $i$ is

Let's call this probability $p_i.$ The indicator that $X$ lies in bin $i$ therefore is a Bernoulli random variable with parameter $p_i.$ Consequently,

Consequently, as $n$ grows large the variance of any of the histogram bars shrinks to its expected value $p_i$ in inverse proportion to $n.$ The result is a discrete approximation to $f:$ it is the ideal to which the histograms will approach as the sample size grows large.

Visual smoothness, then, depends on two aspects of the situation: the positions of the cutpoints and the (mathematical) smoothness of $f.$ The figure is typical: $f$ is a piecewise continuous function and enough cutpoints have been chosen, at a suitably tight spacing, to create a relatively gradual and regular "stairstep" appearance in the discretized version of $f.$ In particular, except at the mode of $f,$ there are no spikes in the bars.

Contrast this with the appearance of the left histogram in the figure, in which I count seven spikes (near $-1.7, -1, -0.3, 0.3, 0.8,$ $1.2,$ and $1.7$) with six dips between them. In the second histogram for a larger sample, there are two spikes on either side of $0$ with a tiny dip between them, but otherwise all the graduations follow the idealized pattern of the discretized density function.

The chances of such extraneous random spikes and dips decrease to zero as $n$ grows large.

This is straightforward to show. Here is some intuition. Consider a sequence of three consecutive bins indexed by $i,i+1,$ and $i+2,$ with corresponding densities $q_i,$ $q_{i+1},$ and $q_{i+2}.$ Their bars form a "stairstep" in the histogram whenever $q_{i+1}$ falls strictly between its neighboring values. The histogram of a random sample, on the other hand, will have random heights of $k_i / (n h_i).$ They will form a spike or a dip only when the middle random height is either the largest of the three or the smallest of the three. As $n$ grows large, (a) these heights vary less and less around their expected values $q_{*}$ and (b) although the heights are correlated (a spike somewhere in the histogram has to be compensated by a general lowering of all other bars to keep their total area equal to $1$), this correlation is small, especially when all the $p_i$ are smal, as in any detailed histogram. Consequently, for large $n,$ it is ever less likely that random fluctuations in the middle count $k_{i+1}$ will cause the histogram to spike or dip at that location.

Analysis with a Random Walk

That was a hand-waving argument. To make it rigorous, and to obtain quantitative information about how the chances of spikes or dips depend on sample size, fix a sequence of three consecutive bins $i,i+1,i+2.$ Collect a random sample and keep track of all bin counts as you do so. The cumulative counts $(X_n,Y_n)=(k_i-k_{i+1},k_{i+2}-k_{i+1})$ for sample sizes $n=1,2,3,\ldots$ define a random walk in the (integral) plane beginning at its origin. There are four possible transitions depending on which bin the new random value falls in, according to this table:

The histogram after $n$ steps will have a spike or dip at bin $i+1$ if and only if this walk ends up either with both differences negative or both differences positive: that is, $(X_n,Y_n)$ is in the interior of the first or third quadrants.

From the table, using the elementary definitions of expectation and covariance, compute that

The multivariate Central Limit Theorem tells us that for sufficiently large $n,$ $(X_n,Y_n)$ will have an approximately Binormal distribution with parameters $\mu_n=nE[(B_X,B_Y)]$ and $\Sigma_n=n\operatorname{Cov}(B_X,B_Y).$ When the ideal discretized version of the density has no spike or dip, $p_{i+1}$ lies between $p_i$ and $p_{i+2}.$ This places $\mu_n$ squarely within the first or third quadrant and makes it vanishingly unlikely that $(X_n,Y_n)$ will be anywhere else, QED.

Finally, it is amusing that when the density is flat at bin $i+1$ (all three probabilities are equal), the covariance is a multiple of $\pmatrix{2&1\\1&2}$ while the expectation is the origin $\mu=(0,0).$ We easily compute that the limiting chance of a spike or dip is $2/3$ (spikes have a $1/3$ chance and dips have the same chance). This is what we would expect to see in a histogram of a uniform distribution on an interval, for instance (except at the two bars at either end). Thus, on average, two-thirds of the bars in a detailed histogram of a large uniform sample will be spikes or dips.

This is R code to simulate large uniform samples, count their spikes and dips, and compare the mean counts with these asymptotic expectations.

Here is an example of its output (with histograms of 32 bins):

Here is the upper tip of the histogram of the first sample in this simulation, with spikes (red) and dips (blue) marked:

(To make the patterns clear, I have replaced each bar in this histogram by a vertical line through its center and do not use zero as the origin.) This particular histogram has nine spikes and nine dips, each comprising 30% of the 32-2 = 30 interior bins: both numbers are close to the expected $1/3$ proportion.

What's the idea behind how more players means smoother?

First, you would need to ask why the curves are not smooth. One thing that is very peculiar is that the curves have peaks at very regular intervals, at intervals of exactly one hundred.

One way that we can explain these bumps is that it is the distribution of the result of a (sort of) random walk where the walking speeds are different depending on the current position. It can be that the algorithm for the lichess elo rating has a factor for the steps by which the new elo is computed after a game, and that this factor depends on the elo rating and changes in steps of 100.

Example simulation for bumps that are independent of sample size

Below is an example based on the simple elo rating system. It is a simulation that let's players play randomly and after one million games we plot the distribution of the elo rating.

What you see is that this creates a bump in the distribution around the elo rating 1750. It is similar to the bumps in the lichess distributions (which probably have multiple steps in the factor $k$ instead of the example which only has a step at 1750).

When we increase the size of the pool of players by ten-fold, then we see that the bump at 1750 remains (only the 'coarseness' of the histogram decreases).

For an intuitive analogy see the equilibrium constant in chemistry. Here you get that the ratio of components depends on a difference in the rate of transfer.

Lichess lack of smoothness not all depending on population size

Not the answer you're looking for? Browse other questions tagged distributions sample-size histogram games rating or ask your own question.