The sample size applied to a non-normal distribution

I have a single variable that represents my population values (sample of data):

The corresponding histogram is: 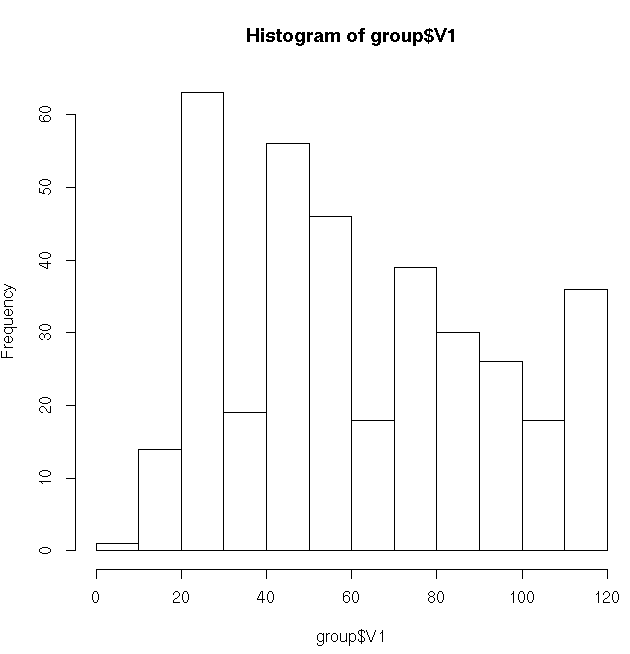 And the Shapiro test of normality:

With the last information my conclusion is that the population is not distributed normally. The objetive is extract a sample from these population, but I have problems to apply a method to determine the sample size, because in some methods the assumption is based on the normality of population. (According with these reference) The sample is required to comparate this group with a random group with the same sample size, and the single variable to evaluate is the Bitscore.

Some references, suggestions, approaches? Thanks in advance.

I'm going to start by accepting your claim that you have the population, but I'll come back to this issue at the end.

1) If you actually have the target population, then hypothesis tests - which are based on assuming you have samples, not populations - are pointless. You can answer such questions by inspection. If that's the population about which you wish to make inferences, it's plainly not normally distributed. The p-value is irrelevant.

3) For this kind of purpose, hypothesis tests of distribution shape don't really answer the right question in any case. e.g.1, e.g.2

Now, to try to address your underlying question, which relates to determining sample sizes for hypothesis tests.

b) Let's say there is some reason to do a hypothesis test when you have the population. You can just simulate samples from your population (by drawing randomly from the population of values) in order to find the minimum sample size with the required characteristics. But since the simulations would actually be the samples, your question would already be answered by then choosing one of your simulated samples at random and labelling it 'My Sample'. [Quite why one would be interested in such a performance is beyond me, but when you have the population, that is drawing a sample.]

[Finally, I'm going to make a little bet. I bet you don't actually have the population about which you wish to make inferences. I bet you wish to extend your inference outside of those 366 values to something broader - your actual target population. This is no doubt part of the reason why you retain some urge to do hypothesis tests.]

Not the answer you're looking for? Browse other questions tagged r distributions normal-distribution sampling random-variable or ask your own question.

303
Is normality testing 'essentially useless'?
20
What tests do I use to confirm that residuals are normally distributed?