Why do we always illustrate and depict the Loss Functions of Neural Networks as Non-Convex?

Why do we always illustrate and depict the Loss Functions of Neural Networks as Non-Convex?

By doing a quick Google Images Search of "Loss Functions for Neural Networks" - we are generally shown the same types of pictures. The Loss Function is generally illustrated as a colorful and wavy/bumpy surface :

My Question: Does anyone know why we often use these kinds of illustrations? My impression is that we want to point out that the Loss Functions for Neural Networks are typically Non-Convex and characterized by such features as "Saddle Points" and "(Several) Local Minimums" - reinforcing the idea that Loss Functions in Neural Networks generally have complicated structures and behaviors, making them difficult for optimization algorithms to minimize and ultimately difficult to train.

Because they aren’t convex. This is an example from actual empirical research I used in my other answer that tries to visualize loss landscape of an actual neural network: 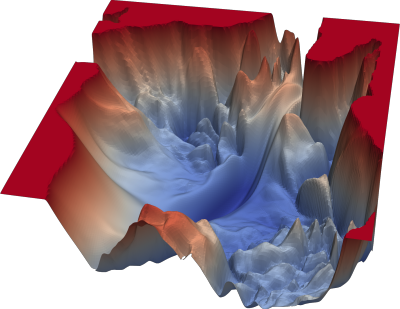 Not the answer you're looking for? Browse other questions tagged neural-networks data-visualization optimization loss-functions gradient-descent or ask your own question.

63
Cost function of neural network is non-convex?
34
Why study convex optimization for theoretical machine learning?
-1
Do we know the Effects of "RELU Activation Functions" on the Convexity of the Loss Functions in Neural Networks?

1
Theoretical Speculations as to Why Neural Networks have Replaced Kernel-Based Methods
1
Advantages of Evolutionary Algorithms vs. Gradient Based Optimization
1
Why can't we just add a penalty to make the Neural Network objective convex?