Walk through `rms::calibrate` for logistic regression

I have figured out a bit of how rms::calibrate works.

Step $3$ is where I start to get lost. What kind of model is fit? Is it, indeed, fit to the bootstrap samples of predicted probability values and observed outomes, or does it fit a new logistic regression each time? (I don't think this is how it work, but I want to make sure.) How does it go from multiple models of bootstrap data to the "apparent" and "bias-corrected" values displayed on the graph? 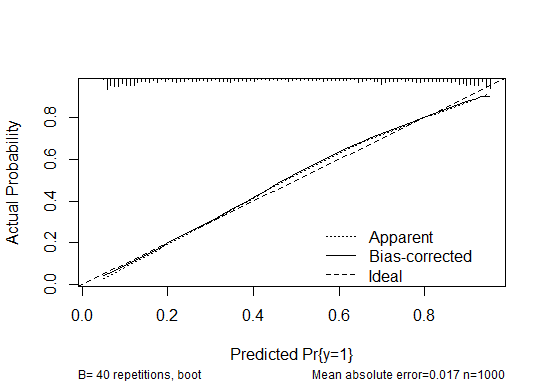 Both calibrate() and validate() in rms by default use the optimism bootstrap, explained for example in Chapter 7 of Elements of Statistical Learning. In your example, you do repeat the logistic-regression modeling on each of multiple bootstrapped data samples.

In general with an optimism bootstrap, you develop a new model on a bootstrap sample. You find how much better that model performs (by some measure) on its bootstrap sample than it does on the full data set. That's the "optimism bias" of that model for that measure.

By the bootstrap principle, an average "optimism" over multiple bootstrap-based models estimates the optimism of the original full model when applied to the population from which the original data were sampled. You then can correct the original model by that average optimism.

The plot then shows smoothed curves for the original calibration and the optimism-corrected calibration. In the plot you show, the original model itself ("Apparent") deviates some from the "Ideal" calibration, but there doesn't seem to be much optimism (difference between "Apparent" and "Bias-corrected") in the calibration.

You can see details in the code; for logistic regression (lrm objects) type rms:::calibrate.default at the R command prompt. That includes a cal.error() internal function for evaluating calibration, and a call to the predab.resample() function for the optimism bootstrap.

Not the answer you're looking for? Browse other questions tagged r regression logistic regression-strategies calibration or ask your own question.