I am in the process of solving a Machine Learning challenge, and I want to do it the right way.

I did some exploratory data analysisand I wanted to check the distribution of the data. As displayed in the figure below, the box plots of each of the numerical continuous dataset features.
According to my understanding, several features do contain outliers, but after reading some articles, I encountered cases where outliers are mistaken for a Pareto distribution, and removing them leads to information loss.

Could you please explain which contain and which do not contain outliers?

Outliers, like beauty and much else, are often in the eye of the beholder.

Identifying outliers is often treated as if it were a matter of knowing that your data are a mix of gazelles (regular beasts) and giraffes (probably large, awkward and unwanted), so the problem is to tell which is which. In real applications, it may not be obvious that there are two such distinct subsets, even in abstract principle. And even if the principle is accepted, it can be hard in practice to tell them apart: imagine how you would proceed if the variables were height, weight, and number of legs and there are known to be young giraffes in the data.

Box plots are routinely misused in this context. First of all, although box plots were (re-)introduced by John W. Tukey in the 1970s, he himself played with several different conventions, and later people haven't stopped inventing different variations -- which could be worthwhile experiment. Unfortunately users often fail to explain in reports which detailed rules their software uses -- which is not helpful.

Here I guess that the convention being followed is one Tukey introduced: plot data points individually whenever any is more than 1.5 IQR from the nearer quartile. Here IQR is interquartile range or upper quartile MINUS lower quartile. Tukey himself regarded this just as a way of identifying data points that need to be thought about, and not at all as a reliable criterion for identifying points that should be rejected. Indeed, sometimes outliers (and skewness) are a signal that data should be analysed on a transformed scale and/or that they need resistant or robust summaries. .

I won't try to say which of your data points are outliers, because

You have two questions

Should outliers be removed?

According to my understanding, several features do contain outliers, but after reading some articles, I encountered cases where outliers are mistaken for a Pareto distribution, and removing them leads to information loss.

There can be different interpretations of 'outliers'

The latter type of outliers, experimental errors, you might want to remove.

But the former type of outlier, extreme cases among the population of measurements, are not always the same as these latter types.

It is these types of measurement or sample errors that we may want to remove from the data because they cause bias and/or high variance in estimates of population parameters.

*It might be better to speak about 'disturbance' rather than 'error'. The variation of measurements is an error in a context of a physics or chemistry experiment, where some fixed value is being measured. But, in psychology, nutrition, health, econometrics, the variations are natural since there is no fixed value and a varied population is being investigated. We do not want to filter out all the errors if these errors are what is representing the population. Discarding data in preprocessing is about the wrong measurements. 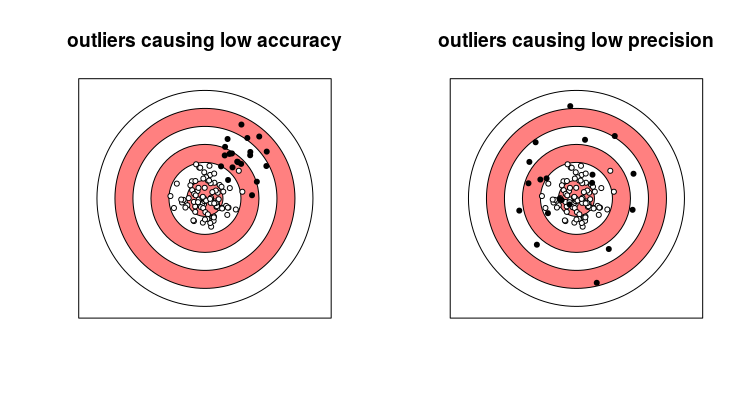 For example, imagine some experiment that determines and compares the growth rate of two different strains of bacteria.

Outliers as a way to detect erroneous measurements

Detecting these cases of error in measurements and sampling is part of preprocessing the data and data cleansing.

One way to detect the erroneous measurements is by finding out the outliers in the first sense, finding extreme cases in the population of measurements.

Should they be removed?

In your example, it is difficult to say because there is no information about the data (what does it represent?). But we see so many 'outliers' that we may wonder whether they are not just naturally part of the population. They are outliers in the first sense (extreme data points) but that does not necessarily make them wrong measurements.

An example to illustrate the points made well above.

On most days, the Dow Jones Index increases slightly. About once a decade it drops by more than 20%. An investor who ignores the "outliers" will not do well.

Not the answer you're looking for? Browse other questions tagged data-visualization dataset outliers exploratory-data-analysis or ask your own question.

527
Why square the difference instead of taking the absolute value in standard deviation?