Do you ever test the pre-asymptotic behaviour of a variable before performing a comparison of means t-test?

I understand that it is not the normality of a random variable that matters in a t-test, but rather the fact that the distribution of the mean follows a normal distribution for large samples. However, is it sometimes useful to test how large a sample must be before the assumption of a normal distribution is warranted? For example, if the number of samples required were very large (much larger than n=30), would assuming a normal distribution be inappropriate? If so, how would you go about checking this?

The inspiration for this question comes from reading about Nassim Nicholas Taleb's Kappa metric.

Of course, the main issue is for the t statistic to have a t distribution with the appropriate degrees of freedom.

So, technically, it not enough for $n$ to be large enough that $\bar X$ is nearly normal. In order for the distribution of a t statistic, e.g, $T = \frac{\bar X-\mu_0}{S/\sqrt{n}},$ to have the appropriate t distribution, its numerator and denominator should be independent.

Using goodness-of-fit tests to check data for normality before doing a t test has been deprecated. But it is a good idea to look at plots of the data to see if they are nearly symmetrical and free of far outliers in either direction before using the data for a t test.

A boxplot of the first sample shows marked right-skewness and outliers.

Sample means and SDs are clearly correlated. But one might consider that the means $\bar X$ (a in the code) are "close enough" to normal.

However, $T$ statistics are not distributed as $\mathsf{T}(\nu=99)$---especially not in the tails, where values are used to decide whether to reject the null hypothesis. So one should not trust results of a t test on such Pareto data.

By contrast, samples of size $n = 50$ from a standard uniform distribution behave well.

$T$ statistics are nearly distributed as $\mathsf{T}(\nu=49).$ So one could trust results of a t test on such uniform data.

To examine the rate of decay in the tails of a distribution, using a sample from that distribution, the usual diagnostic tool is a tail plot. You can find a related post here discussing the construction of a tail plot and the examination of the plot to see if the distribution has a finite variance. An example of tail plots for the two tails of a dataset is shown below. 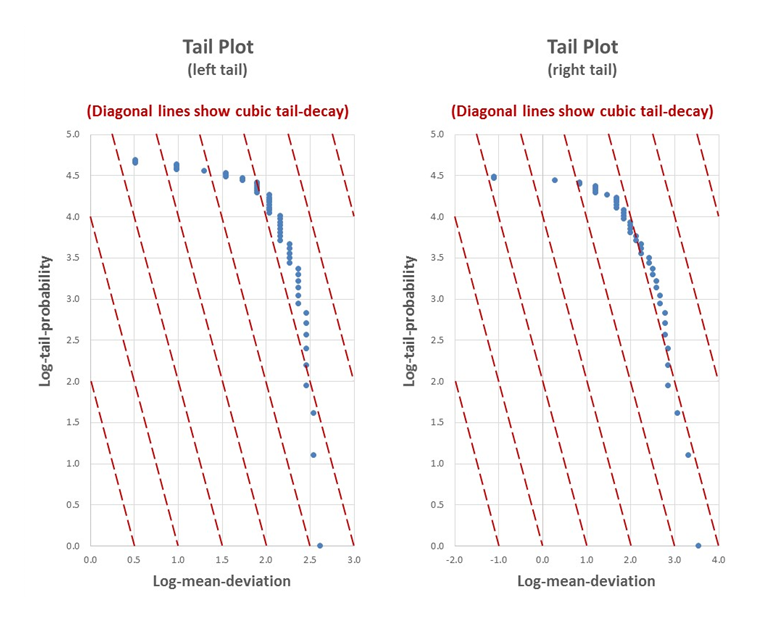 I think the normality on the population does matter. It is a necessity for the t-distribution to hold. See my own question body for why.

So I think it is a good idea to check the normality of the population.

Note: when normality is not there, t-test has certain robustness against it, but that is another topic.

Not the answer you're looking for? Browse other questions tagged normal-distribution t-test central-limit-theorem or ask your own question.

2
Can a two-sample t-test be used with data that doesn't follow a normal distribution?
128
How to choose between t-test or non-parametric test e.g. Wilcoxon in small samples
9
Is the Berry-Esseen theorem useful for justifying normality?
6
Asymptotic t test question- regression when you do not assume normality of errors
2
Why check for normality of data in a sample?
1
Why do we use T distribution in linear regression?