Scikit-learn function roc_auc_score can be used to get area under curve (AUC) of ROC curve. This score is generally used for numeric predictors' value in predicting outcomes.

However, this function can also be used for categorical variables also. Following is an example (in Python language) where the variable sex is used to predict variable survived and AUC is obtained using this function:

However, is this technique statistically sound? Does the AUC obtained using this method a valid value for the relation between 2 categorical variables? Thanks for your help.

Hence, for an AUC of 0.1, the absolute AUC is 0.9; this will help in comparing AUCs of different variables without missing out ones on the other side of the diagonal in the ROC curve. Note: this is being suggested for predicted variable with only 2 categories.

The ROC curve is a statistic of ranks, so it's valid as long as the way you're sorting the data is meaningful. In its most common application, we're sorting according to the predicted probabilities produced by a model. This is meaningful, in the sense that we have the most likely events at one extreme and the least likely events at the other extreme. This is useful because each operating point on the curve tells you (1) how much of your outcome you capture at each threshold using the decision rule "alert if $\hat{p} > \text{threshold}$" and (2) how many false positives you capture with that same rule.

The ROC AUC is the probability a randomly-chosen positive example is ranked more highly than a randomly-chosen negative example. When we're using ROC AUC to assess a machine learning model, we always want a higher AUC value, because we want our model to give positives a higher rank. On the other hand, if we built a model that had an out-of-sample AUC well below 0.5, we'd know that the model was garbage.

In OP's example, OP demonstrated that the arbitrary choice of how they encoded the categorical data can reverse the meaning of AUC. In the initial post, OP wrote:

but then edited to reverse how genders were sorted and found

This is usually where people will point out that you can reverse really bad predictions to get a really high AUC. This is true as far as it goes, but "Let's run 2 tests, fiddle with our data, and report the most favorable result" is not sound statistical practice.

Your suggested procedure of reporting the larger of AUC and 1-AUC gives you a massive optimism bias.

On the other hand, a chi-squared-test does not give a different statistic if you change how you order your categories. It also works when you have 3 or more categories.

It's helpful to see that the ROC curve here isn't really a curve. Instead, you're effectively producing a model that says P(Survive|Male) = .18 and P(Survive|Female) = .74 (the averages in the data), and making predictions using a range of thresholds, e.g. prediction = 1 if p_survive > threshold, or 0 otherwise.

You end up predicting everyone will survive for any threshold < .18, that all females and no males will survive for thresholds between .18 and .74, and that no one will survive with a threshold > .74. This should hopefully make it clear that calculating the AUC or drawing the ROC doesn't really provide any extra information here, since changing the threshold doesn't affect the predictions unless you set it to a daft value. However, it also shows that the AUC score you obtain is still a valid one. 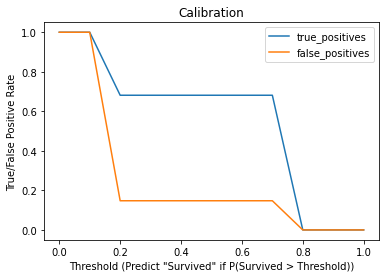 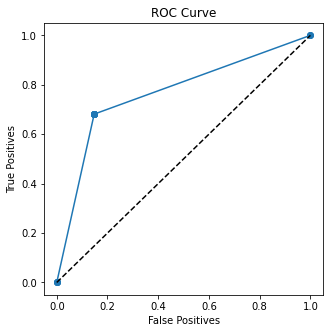 This approach isn't wrong, but it's not a very useful application of the ROC. The purpose of an ROC curve is to show model performance over a range of classification thresholds, and the AUC summarizes the quality of the model over all possible thresholds. With a two-class categorical predictor variable, you have only three possible choices, two of which are degenerate one-class models - you can classify everything as one class, or classify everything as the other class, or actually use the predictor variable to predict outcome. The ROC curve consists of only three points, one at (0,1), one at (1,0), and one at the particular sensitivity/specificity of the actual useful model. Since you really only have one reasonable choice of "threshold", you can more directly summarize the model using sensitivity and specificity, rather than using AUC.

Note that in this particular example, you've set the categories backwards. The AUC of a random classifier is 0.5, so if you find an AUC of less than 0.5, you're doing worse than random. This usually means that you should flip the ordering of the classes. You've built a model that's good at getting the wrong answer, so you should actually classify as the opposite of whatever it says.

Just to clarify, ROC curve means plotting how much True Positives you get compared to False Positives.

Whether the target label is numerical or categorical is a matter of implementation but it does not change the validity of the principles, you are still assessing how "good" (AUC) your model is at discriminating between two distributions.

This is how AUC is interpreted as a measure of model performance, to my knowledge AUC does not quantify the relationship between two variables.

13
Is AUC the probability of correctly classifying a randomly selected instance from each class?
2
Proper way to finding area under ROC curve (AUC)

2
Scoring a classifier with ROC AUC
13
Is AUC the probability of correctly classifying a randomly selected instance from each class?
8
AUC score less than 0.5 for logistic regression
1
Area Under Curve for Anomaly Detection
7
Does AUC/ROC curve return a p-value?
1
AUC-ROC interpretation for a binary classifier
2
Proper way to finding area under ROC curve (AUC)
2
Why is $AUC=0.5$ and a 45-degree line for a ROC curve considered baseline performance?