Why should the frequency of heads in a coin toss converge to anything at all?

Suppose we have any kind of coin. Why should the relative frequency of getting a heads converge to any value at all?

One answer is that this is simply what we empirically observe this to be the case, and I think this is a valid answer.

However, my question is, is there some simple set of principles/axioms that apply to coin tossing from which we can derive this fact?

This is an excellent question, and it shows that you are thinking about important foundational matters in simple probability problems.

Now, if this assumption holds then the sequence of outcomes will be IID (conditional on the underlying distribution) with fixed probability for heads/tails which applies to all the flips. (This is due to a famous mathematical result called de Finetti's representation theorem; see related questions here and here.) The strong law of large numbers then kicks in to give you the convergence result ---i.e., the sample proportion of heads/tails converges to the (fixed) probability of heads/tails with probability one.

What if exchangability doesn't hold? Can there be a lack of convergence? Although there are also weaker assumptions that can allow similar convergence results, if the underlying assumption of exchangeability does not hold ---i.e., if the probability of a sequence of coin-toss outcomes depends on their order--- then it is possible to get a situation where there is no convergence.

As an example of the latter, suppose that you have a way of tossing a coin that can bias it to one side or the other ---e.g., you start with a certain face of the coin upwards and you flip it in a way that gives a small and consistent number of rotations before landing on a soft surface (where it doesn't bounce). Suppose that this method is sufficiently effective that you can bias the coin 70-30 in favour of one side. (For reasons why it is difficult to bias a coin-flip in practice, see e.g., Gelman and Nolan 2002 and Diaconis, Holmes and Montgomery 2007.) Now, suppose you were to execute a sequence of coin tosses in such a way that you start off biasing your tosses towards heads, but each time the sample proportion of heads exceeds 60% you change to bias towards tails, and each time the sample proportion of tails exceeds 60% you change to bias towards heads. If you were to execute this method then you would obtain a sample proportion that "oscillates" endlessly between about 40-60% heads without ever converging to a fixed value. In this instance you can see that the assumption of exchangeability does not hold, since the order of outcomes gives information on your present flipping-method (which therefore affects the probability of a subsequent outcome). 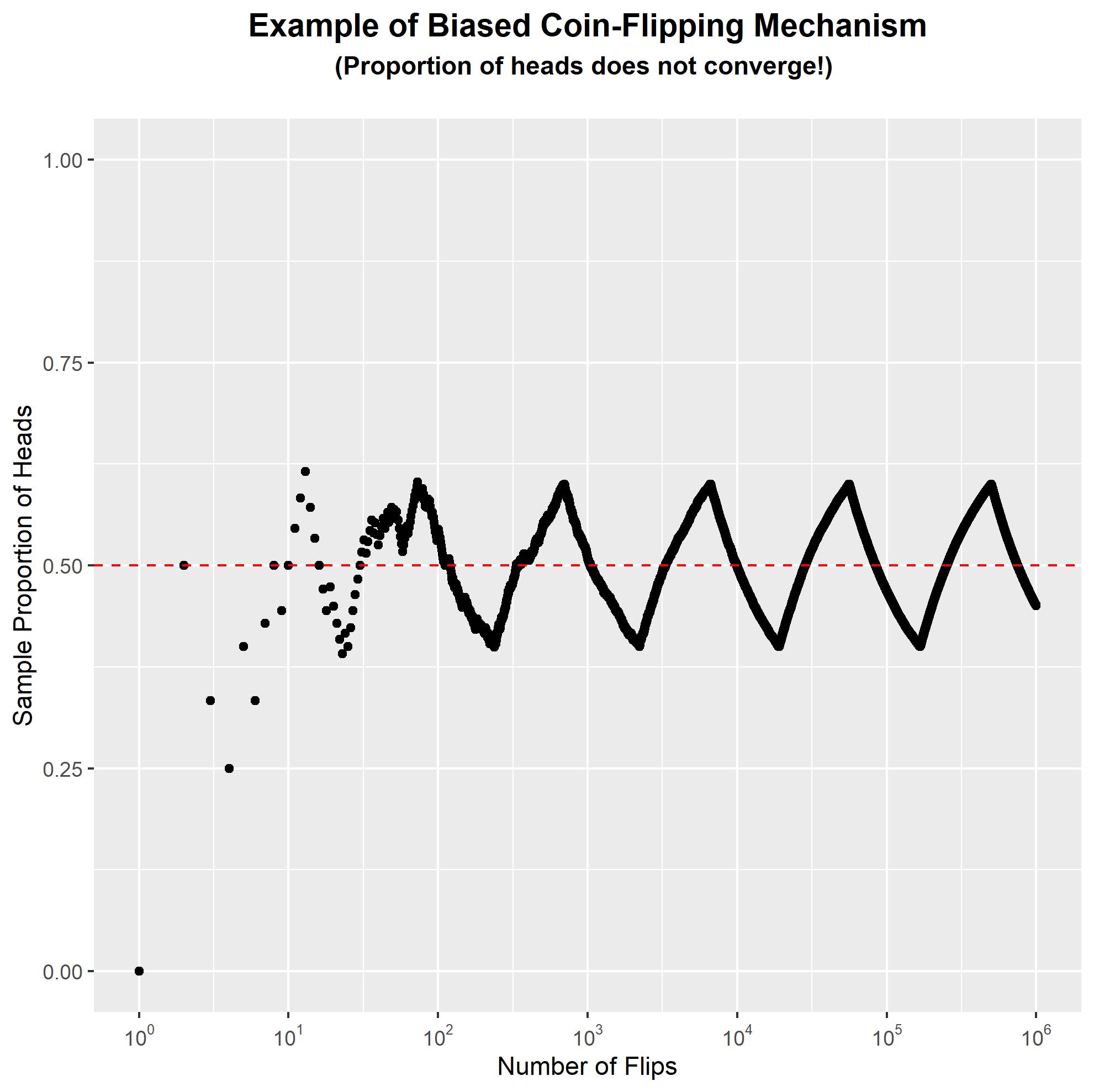 If you assume the coin tosses are independent of each other, and that you are equally likely to obtain heads on any one coin toss, then it isn't an axiom, and in fact follows from the strong law of large numbers.

EDIT: Just to answer some of the other things in your post, statistics is built upon probability theory, so if we empirically observe the frequency of heads converging to a specific value then that's fine, but we would like the empirical observations to agree with our probabilistic model.

And just to clear up a potential confusion before it arises, the strong law of large numbers isn't just related to coin tossing, and is an incredibly versatile and useful theorem (for example, under the same assumptions listed above, we could apply the same argument to dice throwing, and even continuous measurements!)

I want to second the answer by jacobe, but also add a bit of detail.

The "expected" score from any given coin toss is

Of course, this simplifies to

do to our scoring system. The law of large numbers tells us that, as we flip the coin more times, we should eventually see the average approaching to this expectation value (assuming all coin tosses are independent of each other).

Now, if your question is: why do we even believe there is a probability $p$ of getting heads, then I'm not sure there is a justification. At least, I haven't heard it. This comes back to what jacobe said about probability vs. statistics. The existence of $p$ and independence of events are assumptions for our model. If the statistical results seem consistent, that's a good sign for the model.

As long as your coin is memoryless (each flip independent),* such a limiting probability exists because randomly chosen variation tends to cancel itself out. Mathematically, this fact is represented in the theorem that indepedent variances add: $$\mathrm{Var}(A+B)=\mathrm{Var}(A)+\mathrm{Var}(B)$$ Since the variation in $A$ (or $B$) is proportional to the square root (a concave function) of the variance, variances in a sum grow less quickly than the sum itself.

We can formalize that argument as follows:

(One can generalize this argument into a proof of Kolmogorov's Strong Law of Large Numbers.)

* The claim also holds exchangeable random variables, as in Ben's answer. But the proof I know (page 185) uses a martingale convergence argument, which is complicated to explain if you haven't seen it.

The set of principles that applies to coin tossing from which we can derive that, are indeed axioms. That means they’re open to question only inasmuch as the whole idea.

I see a hugely important secondary question as whether this is about prediction, measurement or explanation.

Whichever matters most, how is this not a sophisticated version of the standard high-school query, has a single toss the same odds as one in a sequence and then, which sequence?

After User7344, Ben asks why there should be a single probability that applies to all coin tosses. Rather, how could there not be if “all coin tosses” are equal?

How is it not axiomatic, in- or outside chaos theory and the nature of randomness that from a choice of two outcomes with all things equal, the likelihood of either is 1/2?

At risk of being pedantic, the actual wording of the Question negates much of its value. That looks like a linguistic niggle but consider the detailed discussion that’s developed from it! I hope we all saw the same meaning but how could I prove that. In reality, there can be neither frequency nor convergence in “a coin toss”; only in a series of tosses. Take that same ambiguity back from linguistics to probability, and what certainty remains?

In my view “what we empirically observe” is a starting point, often to be explained but rarely needful of justification.

One thing I suggest most people won’t accept until they’ve tried it, is that whether convergence is what we “empirically observe” depends on how patient we are.

I built a simple roulette simulator and until someone shows how they don’t, I suggest red/black spins follow the same probabilities as heads/tails tosses.

Will you take the time to guess how long an uninterrupted string of either outcome was not uncommon?

I thought that might be four or five; perhaps six but in fact after millions of runs, nothing less than 14 turned out to be uncommon. I’m told that both the result, and my amazement at it, are frequently seen in studies of advanced maths.

If any sequence is equally likely and all are combined, how could the results not converge? How would that not describe the idea of an “average”?

If any sequence is equally likely and they are not combined, how could 13-in-a-row not skew the empirical view of whichever observer saw it?

Not the answer you're looking for? Browse other questions tagged expected-value frequency law-of-large-numbers or ask your own question.

1
Find the expected frequency of some state in a state sequence of length N given a transition matrix M
2
product of random variable and variance for an ensemble
0
Fair coin tosses simulation and Law of Large Numbers
1
Are theoretical probability and relative frequency comparable?
32
Expectation of 500 coin flips after 500 realizations
2
Expected number of running heads in coin toss