Difference in differences has long been popular as a non-experimental tool, especially in economics. Can somebody please provide a clear and non-technical answer to the following questions about difference-in-differences.

What is a difference in differences estimator
Difference in differences (DiD) is a tool to estimate treatment effects comparing the pre- and post-treatment differences in the outcome of a treatment and a control group. In general, we are interested in estimating the effect of a treatment $D_i$ (e.g. union status, medication, etc.) on an outcome $Y_i$ (e.g. wages, health, etc.) as in $$Y_{it} = \alpha_i + \lambda_t + \rho D_{it} + X'_{it}\beta + \epsilon_{it}$$ where $\alpha_i$ are individual fixed effects (characteristics of individuals that do not change over time), $\lambda_t$ are time fixed effects, $X_{it}$ are time-varying covariates like individuals' age, and $\epsilon_{it}$ is an error term. Individuals and time are indexed by $i$ and $t$, respectively. If there is a correlation between the fixed effects and $D_{it}$ then estimating this regression via OLS will be biased given that the fixed effects are not controlled for. This is the typical omitted variable bias.

To see the effect of a treatment we would like to know the difference between a person in a world in which she received the treatment and one in which she does not. Of course, only one of these is ever observable in practice. Therefore we look for people with the same pre-treatment trends in the outcome. Suppose we have two periods $t = 1, 2$ and two groups $s = A,B$. Then, under the assumption that the trends in the treatment and control groups would have continued the same way as before in the absence of treatment, we can estimate the treatment effect as $$\rho = (E[Y_{ist}|s=A,t=2] - E[Y_{ist}|s=A,t=1]) - (E[Y_{ist}|s=B,t=2] - E[Y_{ist}|s=B,t=1])$$ 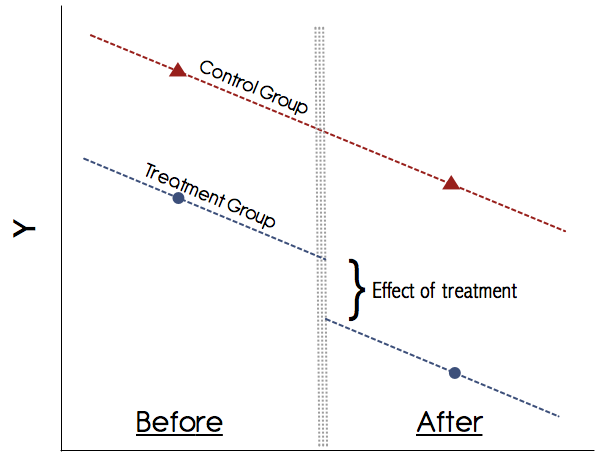 where $\gamma_s$ is again a dummy for the control group and $\lambda_t$ are time dummies. The two regressions give you the same results for two periods and two groups. The second equation is more general though as it easily extends to multiple groups and time periods. In either case, this is how you can estimate the difference in differences parameter in a way such that you can include control variables (I left those out from the above equations to not clutter them up but you can simply include them) and obtain standard errors for inference.

Why is the difference in differences estimator useful?
As stated before, DiD is a method to estimate treatment effects with non-experimental data. That's the most useful feature. DiD is also a version of fixed effects estimation. Whereas the fixed effects model assumes $E(Y_{0it}|i,t) = \alpha_i + \lambda_t$, DiD makes a similar assumption but at the group level, $E(Y_{0it}|s,t) = \gamma_s + \lambda_t$. So the expected value of the outcome here is the sum of a group and a time effect. So what's the difference? For DiD you don't necessarily need panel data as long as your repeated cross sections are drawn from the same aggregate unit $s$. This makes DiD applicable to a wider array of data than the standard fixed effects models that require panel data.

Another word of caution should be applied when it comes to the treatment of standard errors. With many years of data you need to adjust the standard errors for autocorrelation. In the past, this has been neglected but since Bertrand et al. (2004) "How Much Should We Trust Differences-In-Differences Estimates?" we know that this is an issue. In the paper they provide several remedies for dealing with autocorrelation. The easiest is to cluster on the individual panel identifier which allows for arbitrary correlation of the residuals among individual time series. This corrects for both autocorrelation and heteroscedasticity.

For further references see these lecture notes by Waldinger and Pischke.

Wikipedia has a decent entry on this subject, but why not just use linear regression allowing for interactions between your independent variables of interest? This seems more interpretable to me. Then you might read up on analysis of simple slopes (in the Cohen et al book free on Google Books) if your variables of interest are quantitative.

It is a technique widely used in econometrics to examine the influence of any exogenous event in a time series. You pick two separate groups of data relating to before and after the event studied. A good reference to learn more is the book Introduction to Econometrics by Wooldridge.

Two additional points are worth noting. First, 80 of the original 92 DD papers have a potential problem with grouped error terms as the unit of observation is more detailed than the level of variation (a point discussed by Donald and Lang [2001]). Only 36 of these papers address this problem, either by clustering standard errors or by aggregating the data. Second, several techniques are used (more or less informally) for dealing with the possible endogeneity of the intervention variable. For example, three papers include a lagged dependent variable in equation (1), seven include a time trend specific to the treated states, fifteen plot some graphs to examine the dynamics of the treatment effect, three examine whether there is an "effect" before the law, two test whether the effect is persistent, and eleven formally attempt to do triple-differences (DDD) by finding another control group. In Bertrand, Duflo, and Mullainathan [2002] we show that most of these techniques do not alleviate the serial correlation issues.

Not the answer you're looking for? Browse other questions tagged regression econometrics difference-in-difference or ask your own question.

4
Derivation of the effect of unmodeled confounders on OLS estimates
4
Common trends with Difference in differences
6
Measuring length of intervention effect
5
Choosing Location Based Control Group
5
Matching in a linear DiD setup
4
Difference in Difference - Does the control units need to be similiar?
3
Diff-in-Diff special type of OLS?
3
Causality studies on observational data: DID with 2SLS to compliment Rubin causal model
2
Common trend assumption
2
Year-fixed effects in a pre-post OLS regression analysis
See more linked questions

9
Using text mining/natural language processing tools for econometrics
3
How to use the bunching estimator to estimate the elasticity of taxable income
2
Difference in Difference with leads and lags
0
Is choosing only significant coefficients (based on t stats) from a multiple linear regression model a good idea, provided the F stats is significant?
0
Difference-in-differences and control variables
0
In Survival Analysis, does "Non - Cumulative" Hazard Exist?