I completely rewrote my very terribly simplistic initial question (currently erased) to take into account two key elements of advice from the original answer.
(1) Median years of survival is a good measure of life expectancy for patients with typical disease progression within a FLIPI score.
(2) Survival rates have drastically improved in the Rituximab era. 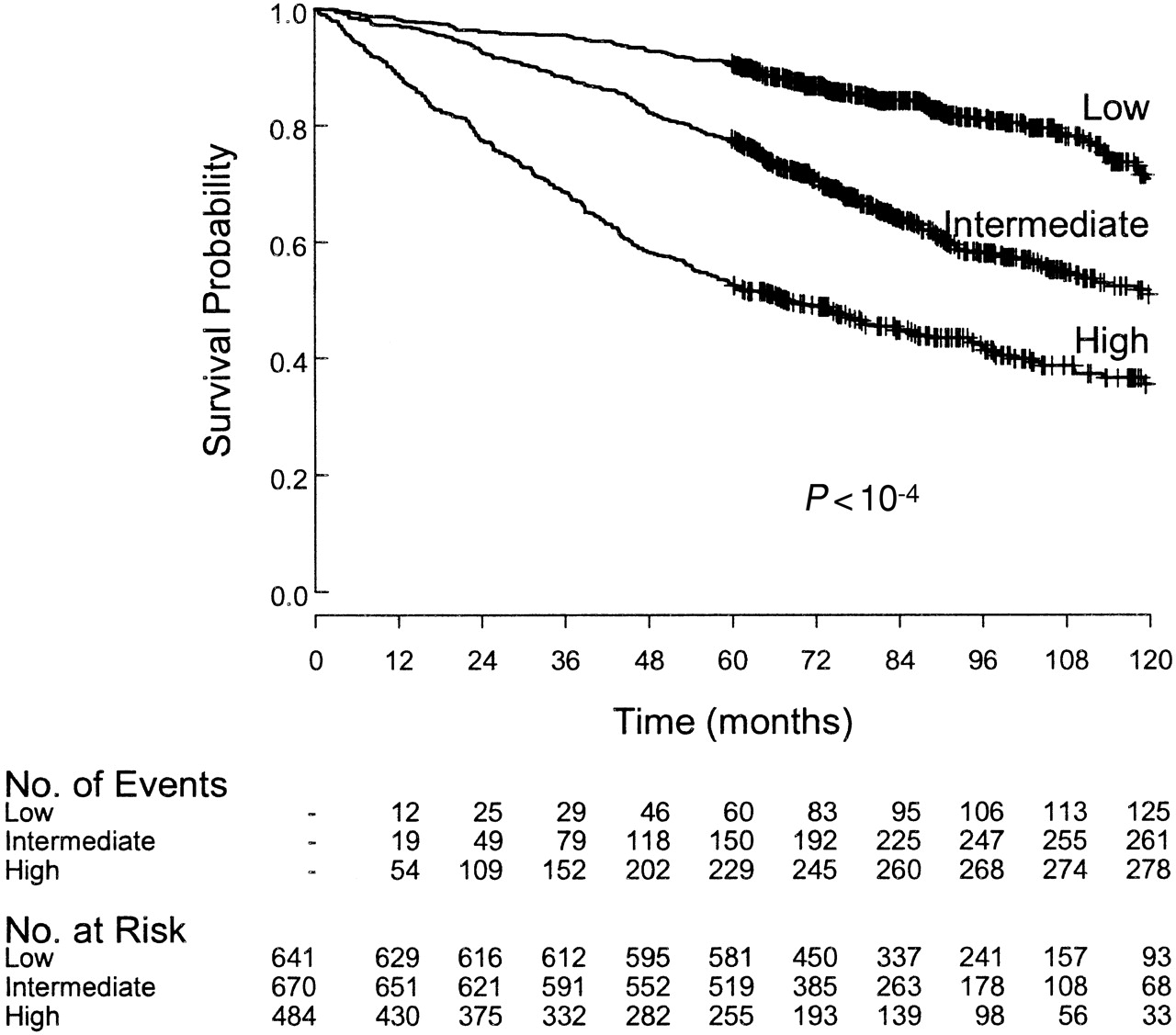 The above is from Figure 4 from this paper: Follicular Lymphoma International Prognostic Index 2004

The 6.16 years median life expectancy referenced by the answer below may be a very reliable measure of typical outcomes for those with typical FLIPI(3) disease progression.

Based on the advice in the answer I found a sufficiently large sample that recalibrated the overall survival rates for the Rituximab era: Follicular lymphoma in the modern era: survival, treatment outcomes, and identification of high-risk subgroups 2020 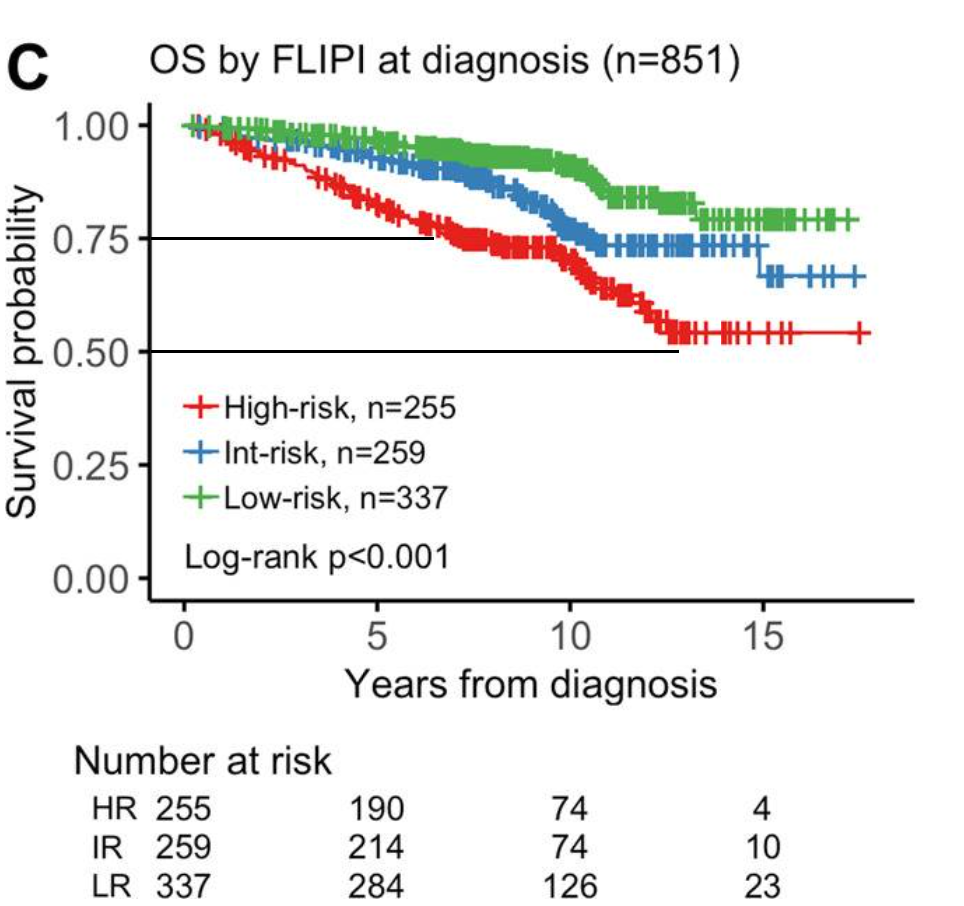 Those calculations aren't correct. You can't reliably turn overall-survival percentages at any given year into a survival estimate at other times unless you know the shape of the survival curve over time and make certain assumptions. Sometimes there are sharp survival drops at early times followed by a plateau of long survival times, representing a situation in which some are "cured."

The paper you cite, however, shows survival curves for 3 groups based on FLIPI, in its Figure 4 reproduced below: 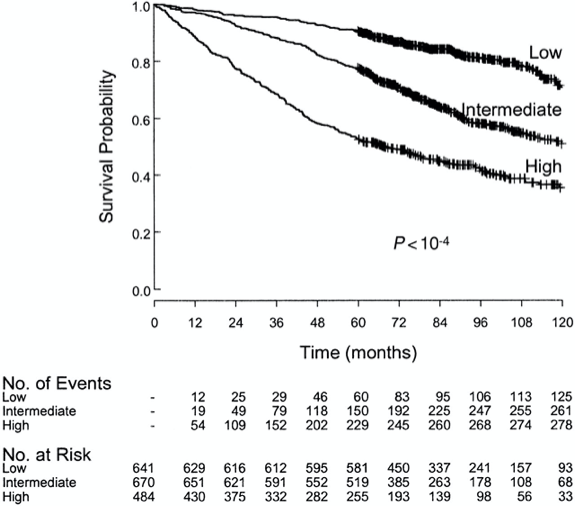 An index of 3 is in the "High" group. Although it's not strictly a "life expectancy," I think that a measure of survival like the median survival time (time at which half have died, survival probability of 0.5) is generally more informative.* That's just a bit beyond 60 months after diagnosis for the "High" group.

That's only a crude estimate for several reasons, and is unlikely to apply to you personally.

First, FLIPI doesn't take into account the details of the different risk factors (Age, Ann Arbor Stage, hemoglobin, LDH, and number of involved sites), just the number of those adverse features (Table 4 of the cited paper).

Second, survival curves often depend heavily on the particular patient population that was evaluated. The cited paper was based on an international study; the details of survival might well depend on residence location.

Third, and most important, that paper is now nearly 20 years old and is based on initial diagnoses from 30 to 37 years ago. Therapy and outcomes have improved substantially since then, particularly due to the development of rituximab, which was only approved in 1997 and thus was not available to most patients in the study you cite. See Freedman and Jacobsen, Follicular lymphoma: 2020 update on diagnosis and management, American Journal of Hematology, Volume 95, Issue 3, pages 316-327, for a more recent discussion.

This type of thing is always hard when you are personally involved. Make sure to discuss your concerns with your own clinicians, who are in the best position to evaluate your specific personal risks.

*For example, in a "cure" model the average survival time (life expectancy) can be quite high because of the numbers of individuals who survive the disease in question and die much later from other causes. The median survival time is when there's a 50/50 chance of having survived that long.

Those calculations aren't correct. You can't reliably turn overall-survival percentages at any given year into a survival estimate at other times unless you know the shape of the survival curve over time and make certain assumptions. EdM

I took two key aspects of this original answer to derive an updated analysis: 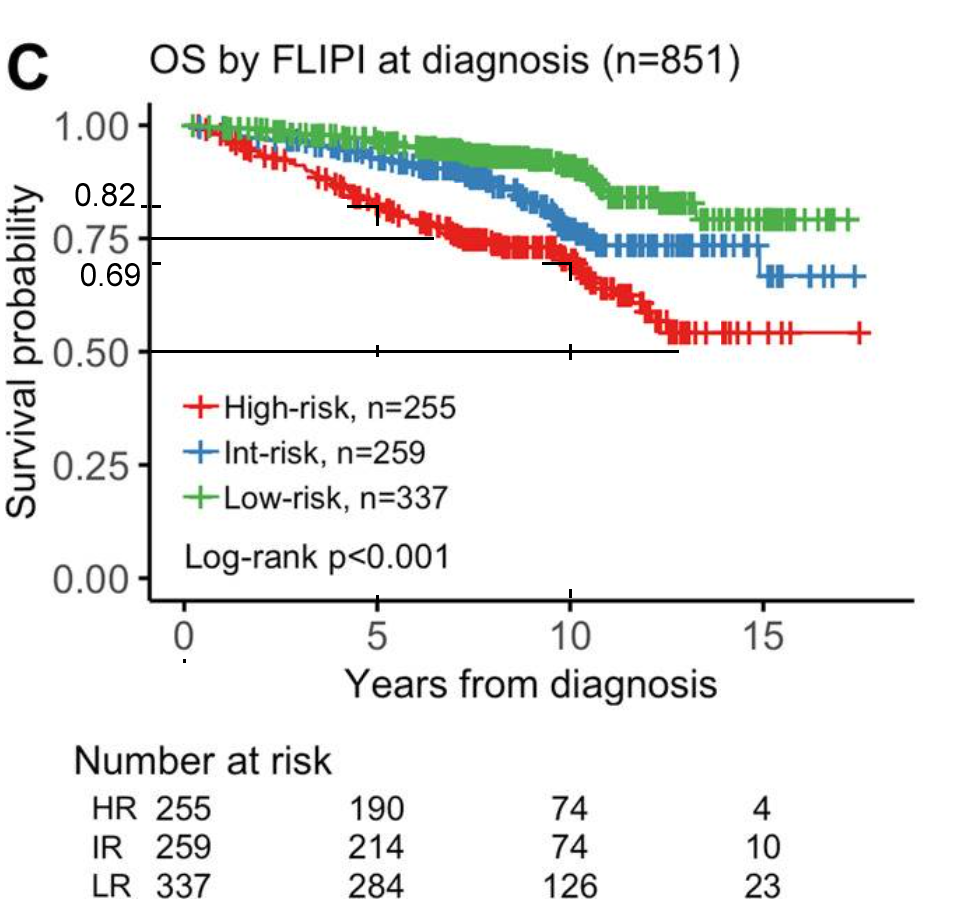 (2) The above estimate can be made much more accurate when considering data from the Rituximab era. (shown above).

A reasonable estimate of life expectancy for patients with a FLIPI 3 score (based on data from the Rituximab era) and typical disease progression is a 55% increase over the prior estimate: 6.18 * (82/53) = 9.56 years. (82% was interpolated directly from the graph pixels).

Patients with a FLIPI index score of 3 (eventually treated with Rituximab or equivalent) having typical disease progression have a life expectancy of 9.56 years.

Not the answer you're looking for? Browse other questions tagged regression survival or ask your own question.