Is Wikipedia wrong about the null distribution of the signed rank statistic?

While a Normal distribution does always include some positive probability of negative values, that probability can be so small as to be meaningless for all intents and purposes.

Height of adult humans is usually thought to be normally distributed. Yet the probability of a height less than 0, while positive, is pretty darn small.

W quickly gets to be very large, so it can get very close to a Normal even if it never actually exactly matches one.

Actually, I suspect Wikipedia may be wrong there. That doesn't match the links for starters. That statistic makes me worry for several reasons. The expected value of the sum of the signed ranks of absolute differences will be zero under the null, and a suitably scaled version of it will converge to normality by the CLT. As such, the absolute value of that won't converge to normality, but may, when suitably scaled, converge to a standard half-normal.

Having just simulated the distribution under the null at various sample sizes, it looks like I am right - taking the absolute value of the whole thing makes something that would be asymptotically normal become half-normal.

I agree - Wikipedia is wrong when it says that statistic converges to normality. It doesn't look like it does, and I don't recall ever having seen the statistic written that way before.

I should show rather than tell: here's an example simulation using the statistic as defined at the Wikipedia page. I did 10000 simulations of signed rank statistics for a continuous distribution symmetric about 0 (representing the differences), at n=100: 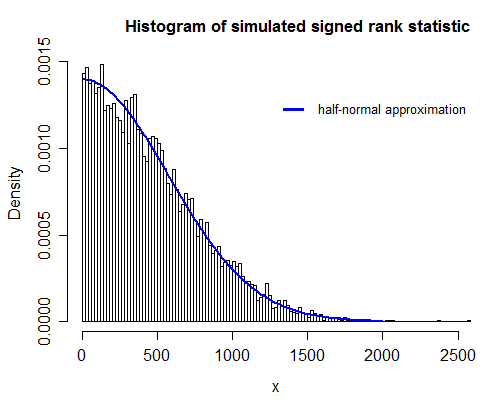 20
Central limit theorem and the law of large numbers
3
Is there a near-exhaustive summary of statistical procedures?

11
Appropriateness of Wilcoxon signed rank test
3
Binomial Distribution & t-Test
1
How is the signed rank statistic defined in Matlab?
3
Estimate the variance of MLE
7
Why do zero differences not enter computation in the Wilcoxon signed ranked test?
6
t-statistic for linear regression
0
Null and alternative hypothesis in a test using the hypergeometric distribution