Now, we have several such "average" curves that represent, e.g. "treated" versus "non-treated" cells. We need to statistically evaluate whether the curves are significantly different.

What I have done so far are multiple t-tests ("one per row") between two curves - this gives me individual p values, one for each time point, which looks like a reasonable start. In principle it tells me from what time point in the measurement the curves are significantly different (if they are at all).

Is there a tried-and-true statistical method to get a single p-value to determine whether two such curves are significantly different? Can anyone let me know (in layman's terms) how to do it?

edit: For illustration, here is a typical result - we have means, SD and N for every time point, but show only a few SDs here as error bars to not totally obscure the "average" line. What we'd like to have is one value that describes the significance of the difference between two lines, e.g. of the blue and the red ones. 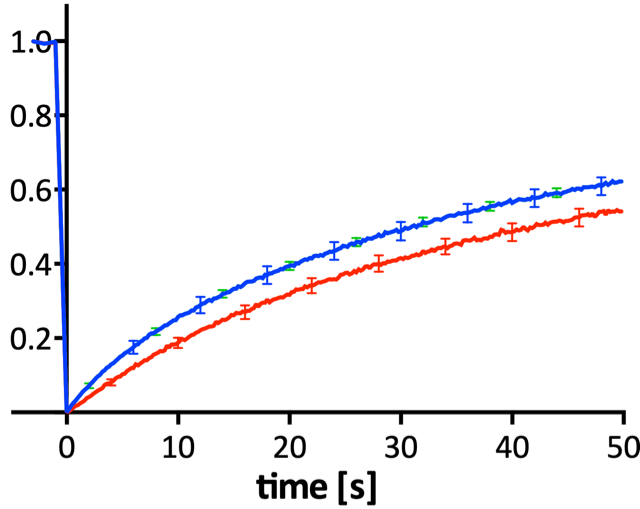 Is there a tried-and-true statistical method to get a single p-value to determine whether two such curves are significantly different?

Unless you have some theoretical form for the change in signal over time, this seems to be an ideal application of generalized least squares regression. You model the individual observations as a flexible function of the combination of time and treatment, doing so in a way that takes the correlations of observations within individual cells into account. That is sometimes called the "growth curve model," a name that seems to describe your example data pretty well. Frank Harrell's course notes and book explain the approach with an extended example in Chapter 7.

Using 250 separate t-tests is both inefficient and potentially misleading. With a p < 0.05 cutoff for "significance" you would expect about a dozen false positives just by chance. Also, that doesn't directly model the time course or account for the fact that you have repeated measurements on individual cells.

You can accomplish what you want with a single generalized least squares model. Each observation is modeled, with one row per observation notated with time, treatment, a cell ID, and any other covariates you want to evaluate.

The time course is fit with just a few coefficients, for example via a regression spline, versus the 250 separate coefficients you implicitly use now. With fairly simple, non-wiggly curves as you show, you only need a few "knots" to break the time axis into time periods for this. Within each time period between a pair of knots, values are fit with a cubic polynomial. At each knot, the polynomials from the time periods on both sides are constrained to be continuous and smoothly joined. From the data you show you might even be able to fit a single low-order polynomial over the entire time range. The idea is the same whether you use a single polynomial or a spline: describe the time course with just a few coefficients whose values you estimate directly from the data.

To evaluate the effect of treatment, you include as predictors in the model both a term for treatment by itself and an interaction between treatment and time, including interactions with the spline/polynomial terms modeling time. The coefficient for treatment would determine whether there was any difference between treated and control at a reference time point, typically at time = 0. The interaction terms allow the shape and time course to differ between the treatments.

To account for the correlations of observations within individual cells over time, you specify an overall structure for those correlations that is incorporated into the modeling. The Harrell references show how to do that in the context of generalized least squares. Mixed models with "random effects" for cells might be used instead to this end, but I don't see any advantage for your application.

"To get a single p-value to determine whether two such curves are significantly different," you do a test that evaluates all of the coefficients associated with treatment to determines whether any are different from 0. If you work with the tools in Harrell's rms package and its Gls() interface to generalized least squares, that's readily done with that package's anova() function. If you have a particular interest in the differences at 50 seconds, you can get error estimates that include information from all of the observations, not just those taken at 50 seconds.

Not the answer you're looking for? Browse other questions tagged statistical-significance data-visualization descriptive-statistics multivariate-normal-distribution time-course or ask your own question.