I know empirically that is the case. I have just developed models that run into this conundrum. I also suspect it is not necessarily a yes/no answer. I mean by that if both A and B are correlated with C, this may have some implication regarding the correlation between A and B. But, this implication may be weak. It may be just a sign direction and nothing else.

Here is what I mean... Let's say A and B both have a 0.5 correlation with C. Given that, the correlation between A and B could well be 1.0. I think it also could be 0.5 or even lower. But, I think it is unlikely that it would be negative. Do you agree with that?

Because correlation is a mathematical property of multivariate distributions, some insight can be had purely through calculations, regardless of the statistical genesis of those distributions.

These considerations imply there are indeed some constraints on the mutual correlations. The constraints (which depend only on the non-negative definiteness of the correlation matrix, not on the actual distributions of the variables) can be tightened depending on assumptions about the univariate distributions. For instance, it's easy to see (and to prove) that when the distributions of $X$ and $Y$ are not in the same location-scale family, their correlations must be strictly less than $1$ in size. (Proof: a correlation of $\pm 1$ implies $X$ and $Y$ are linearly related a.s.)

As an add-on to whuber's answer: The presented formula

can be transformed into following inequality (Olkin, 1981):

A graphical representation of the upper and lower limits for $\rho$ looks like: 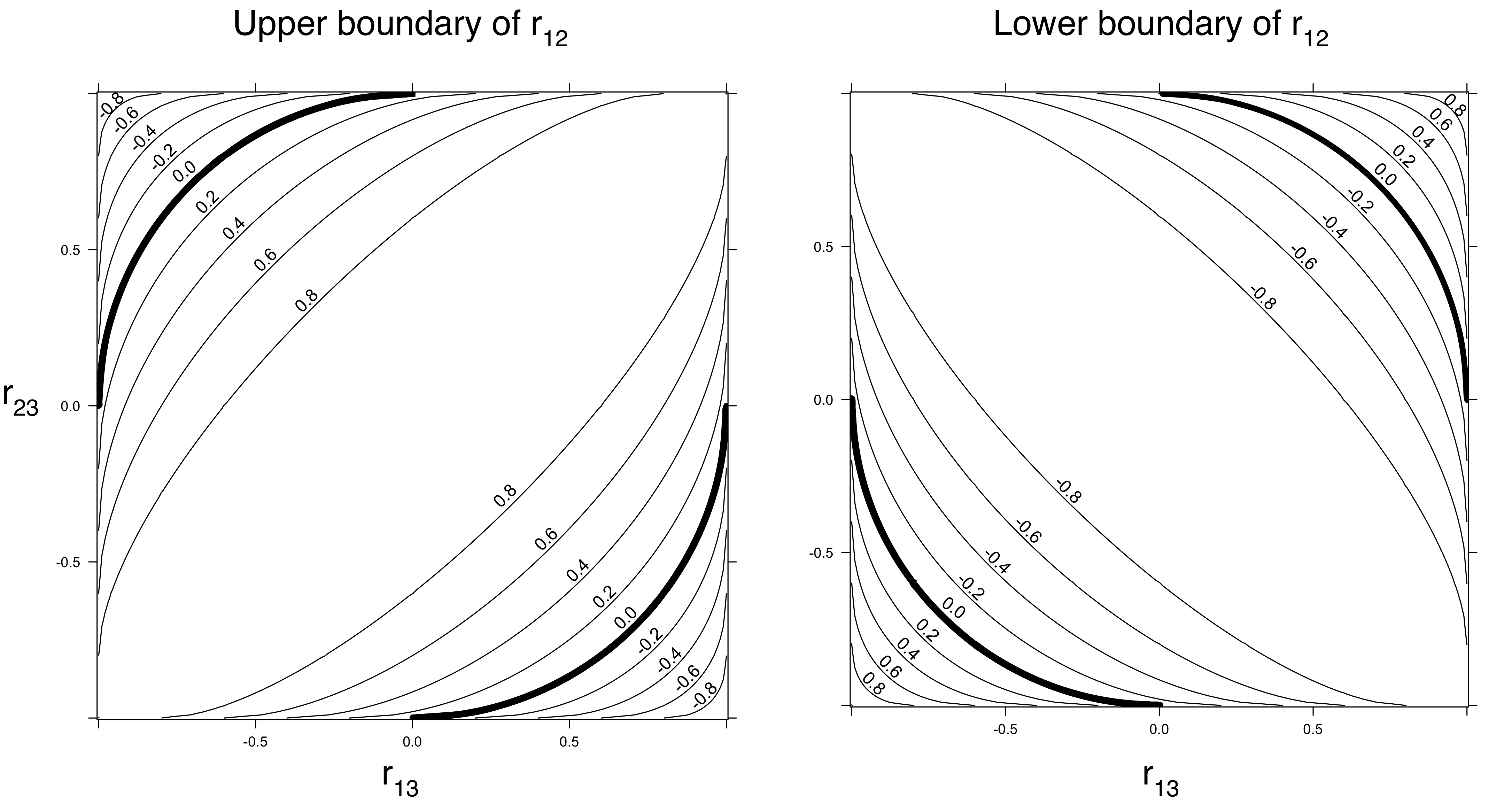 Correlation is the cosine of the angle between two vectors. In the situation described, (A,B,C) is a triple of observations, made n times, each observation being a real number. The correlation between A and B is the cosine of the angle between $V_A=A-E(A)$ and $V_B=B-E(B)$ as measured in n-dimensional euclidean space. So our situation reduces to considering 3 vectors $V_A$, $V_B$ and $V_C$ in n dimensional space. We have 3 pairs of vectors and therefore 3 angles. If two of the angles are small (high correlation) then the third one will also be small. But to say "correlated" is not much of a restriction: it means that the angle is between 0 and $\pi/2$. In general this gives no restriction at all on the third angle. Putting it another way, start with any angle less than $\pi$ between $V_A$ and $V_B$ (any correlation except -1). Let $V_C$ bisect the angle between $V_A$ and $V_B$. Then C will be correlated with both A and B.

I think it's better to ask "why SHOULD they be correlated?" or, perhaps "Why should have any particular correlation?"

The following R code shows a case where x1 and x2 are both correlated with Y, but have 0 correlation with each other

The correlation with $Y$ can be made stronger by reducing the .3 to .1 or whatever

For those who want some intuition, a correlation can be seen as a cosine of some angle. So, consider three vectors in 3D, let say A, B, and C, each corresponding to one variable. The question is to determine the range of possible angles between A and C when the angle between A and B as well as the angle between B et C are known. For that, you can play with an online tool without installing any software. Just go to the page http://www.montefiore.ulg.ac.be/~pierard/chained_correlations.php

Because correlation is not the same as causation.

You might illustrate this causal structure the following way:

You might illustrate this causal structure the following way:

Not the answer you're looking for? Browse other questions tagged correlation cross-correlation or ask your own question.