Is there a certain method to communicate the results of earnings without logging the variable?

I am investigating whether earnings differences have widened between different social classes in several European countries by comparing two different periods. The picture below shows the findings of an interaction, here in the code:

The base category of the variable class is: upper-middle class. The interaction period*class shows whether the gap between any of the three shown social classes have widened relative to the upper-middle class between two different periods. The variable period is a binary variable (e.g., 2000 vs 2018).

The issue in this graph is that these countries have different currencies (dollar,euro, pound, zloty). This makes it difficult for the reader to make sense a bit of the results. For example, 389 zlotty is around $87, but if the reader is not familiar with that currency, they might not understand how large or small is this effect. Two possible solutions that i know could help with that but i do not want to use them for several reasons that i will not discuss here. First, to log the income variable. Second, to convert all currencies to one that is standardized across them, for example using the dollar as common currency.

I was wondering whether anyone has any advice on other solutions which i can use to communicate these results in a more intuitive way?

Is dividing these estimates by the median earnings of one period or the average of two periods would make sense? that way we might have a better feeling of how large are these differences within one country, but at the same time will be comparable across countries. 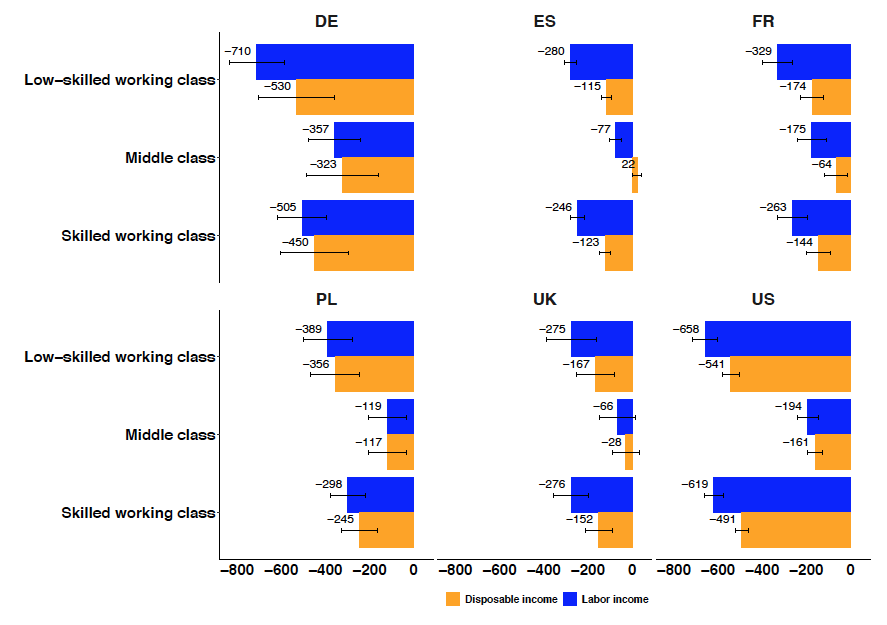 regression econometrics reporting
Share
Improve this question
edited May 11 at 14:52

In my experience with econometric data, I always log monetary values (income, wealth, rent and so on). But, so far I only published in a more sociological venues and not econometric ones so I am not sure if that is a common practice in econometrics. The reason for the log is that in my experience (not with European countries data) these numbers are log normally distributed. You can check that quickly by doing a Q-Q plot for the log income.

Thus, if I am right regarding your data, you should take the log of the income. And there is an added bonus as you mentioned. The currency conversions are a multiplicative constant (if the rate is constant during the period) which will be incorporated into the Intercept using the log income. There, problem solved - all coefficient of the regression are comparable.

If the exchange rate is not constant for 2000 and 2018, then I think you should convert the local currencies to a single one, and then take the log (if the data distribution is log-normal)

In this case it is helpful to remember the reason why these types of regressions and economic analyses use the log transformation, it is because it tends to make the residuals more normally distributed. The foundational assumption of the lm algorithm and parameter variance estimates is that the residuals are normally distributed. You can also see this thinking in discussions on Box-Cox transformations. Below is my personal heuristic for how to work through the various options. At each stage, you ask if the residuals form an approximate normal distribution and then stop. I use a quantile quantile plot to check normality primarily. If there is a question about whether some of the data values are missing, but recorded as zero, you have to solve that first.

My answer to this is yes, you should transform the incomes to a constant dollar amount as long as the other variables mean something consistent across monetary types. Age, gender of the head of household, household size, and period all mean the mean same thing regardless of country. You also want their coefficient to mean the same thing (e.g. the increase in income due to an 1 year increase in age). Class might mean the mean the same thing across countries if a common distributional argument is used, or it might be dependent on country specific values. You might also consider including a country effect if you have sufficient degrees of freedom.

You should also consider transforming 2018 dollars into a constant inflation adjusted 2000 dollars. You may also have to adjust the class definitions depending on how that was done.

I think the figure that you create should be central to the hypothesis you intend to test. I am investigating whether earnings differences have widened between different social classes in several European countries by comparing two different periods. In this case, it seems that you are testing the coefficient on period*class holding age, gender, and household size constant. In cases where you want to show the effect of an interaction variable, there are common ways to do that you could look up. Essentially people plot Income versus period with lines for two different classes. If you want to show this in a country-specific way, then you would want to add country to that interaction.

Not the answer you're looking for? Browse other questions tagged regression econometrics reporting or ask your own question.

3
Aggregate vs. firm-level regressions - How can the regression coefficients differ that much?
1
Using estimated parameters as dependent variables
2
How do I compare 5 simple linear regressions?
5
Is pooling countries together or running a regression model for each country alone is more suitable for comparison?
3
How to plot the graph or perform a formal test of parallel trends for generalized DiD?
2
Interpreting mixed effects model results. Why are my coefficients for mixed effects model are so large?