A misspecification error with linear models that can complete reverse the direction of an effect, has this been described, has this a name?

Linear models are ubiquitous in economic, social, health and nutritional sciences and the starting point for much research and many articles.

However, there is a problem with linear models. When the true underlying model is more complex and not exactly linear, then the estimated coefficients might be counterintuitive and have an opposite sign in comparison to the coefficient in the underlying 'true' model.

An example of this effect is in an answer to this question Interpretation of the linear predictor of a OLS model on binomial data where a logistic model is fitted with a straight line. 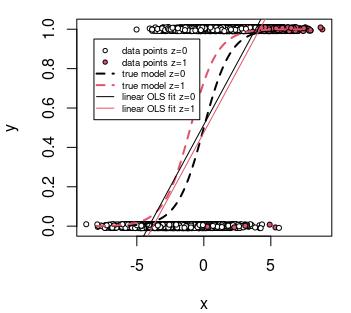 This effect seems to me as a typical error. It seems alike to other statistical fallacies like the Yule-Simpson effect, the misuse and wrong interpretation of p-values, and the piranha problem. The effect might be less common than those three but it is similar in the problem originating from a naive approach.

Question: has this effect been described? Where and by whom? (and maybe it even has a name?)

Code for the model and image:

6
Interpret t-values when not assuming normal distribution of the error term
6
Can I use a z-test on heteroscedastic data?
2
Problem in accepting R-squared (coefficient of determination) as a perfect measure of goodness of fit
1
Linear regression with low variations in the explanatory variables
1
What do I label the legend in this regression plot
3
GAM: Why are confidence bands equal to zero when predicted value is zero?