probability that the players will exchange their initially drawn number

Consider the following two-player game. The players simultaneously draw one sample each from a continuous random variable X, which follows $Uniform\ [0, 100]$. After observing the value of her own sample, which is private information (that is, opponent does not observe it), players simultaneously and independently choose one of the following: $SWAP$, $RETAIN$. If both the players choose $SWAP$ then they exchange their initially drawn numbers. Otherwise, if at least one person chooses $RETAIN$, both of them retain their numbers. A player earns as many Rupees as the number she is holding at the end of the game. what is the probability that the players will exchange their initially drawn numbers?

this is a question from one of master's entrance exams, now i think that the question is incomplete because given the information in the question if the it is up to player to draw any number from the given interval of $ [0,100]$, why would any player choose any number less than $100$. all the players will choose to maximize their payoff and hence they must draw $100$. and hence the required probability should be equal to 0

But if there is a missing point from the question, for instance the players might draw from 101 balls numbered 0 to 100 in that case the question seems like Monty Hall Problem.

If i am wrong then can anyone please help me with this question?

probability random-variable uniform-distribution
Share
Improve this question
asked May 13 at 7:35 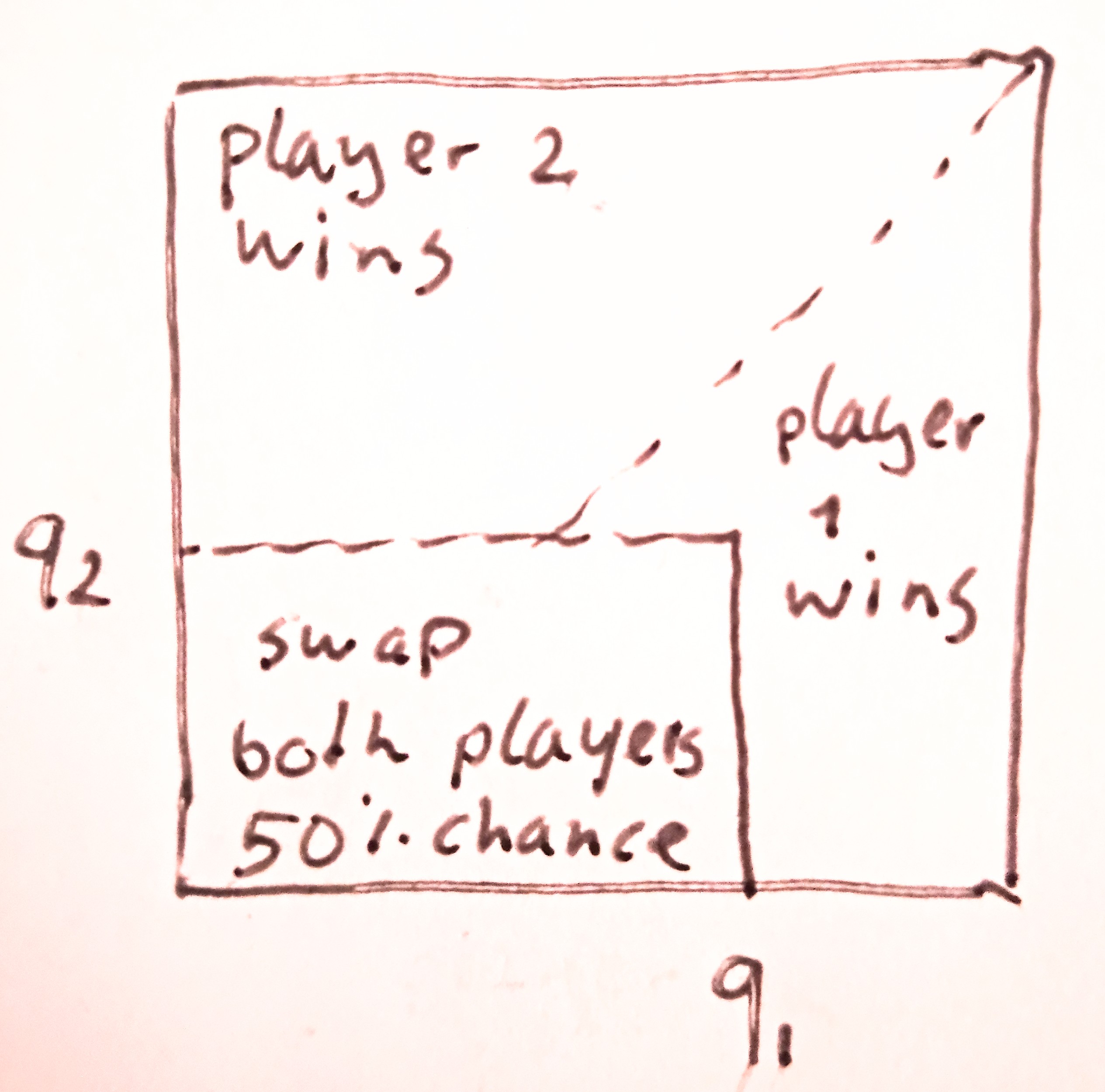 When $q_2 < q_1$ the player 1 can improve their strategy by decreasing $q_1$ as this will increase the region of lottery outcomes where the player 1 is gonna win, at the cost of a reduction in the region where they swap and each has 50:50 chance.

When $q_1 < q_2$ the player 1 can improve the strategy by increasing $q_1$. This will increase the swap region at the cost of the region where player 2 would win.

So what we have here is a Nash equilibrium in all the points on the line $q_1 = q_2$. If $q_1 = q_2$ then none of the players can improve their strategy. However these equilibria are not stable, a small change in the strategy by the one player changes the strategy of the other. There is also no dominant strategy. There is no strategy that works the best no matter what your opponent does.

why would any player choose any number less than 100

Say a player has the number 99 then of course the player would still prefer a larger number but the probability that the swapped number is an improvement is very low.

Not the answer you're looking for? Browse other questions tagged probability random-variable uniform-distribution or ask your own question.

23
What's the probability that from 25 random numbers between 1 and 100, the highest appears more than once?
1
Three players with their own coin flip untill they have heads. The first one with heads wins
4
Expected length of a memory game of two clueless players
4
Uniform random variables and optimal strategy
1
A multinomial problem has been solved programmatically, could someone please give a hint about how to solved it mathematically?
2
Strategy for game where larger number wins. Drawn from standard uniform distribution with one redraw allowed
1
Calculate the probability that observarvations are due to cheating and not chance in a Bernoulli trial