Simulating a joint distribution with the inverse method

I have the following joint distribution:

I want to simulate a sample of this distribution through the inverse method but I don't know if my procedure is right.

simulation quantiles cumulative-distribution-function
Share
Improve this question
edited May 14 at 23:23

For the record, integrating out $y$ gives the marginal density

Conditional on $x,$ the density of $y$ is proportional to $y^x,$ whose distribution function is

for $y$ will give us one realization $(x,y)$ from the distribution with density $f.$

A practical example is this R implementation, which draws n iid values from this distribution:

The return value is an $n\times 2$ array with $x$ in the first column and $y$ in the second.

The result of drawing ten million values with x <- rjoint(1e7) (which takes two seconds on this machine) looks like this figure, where contours of the resulting 2D density are drawn over a colored contour plot of $f$ (both use the same contour intervals ranging from $0.2$ near the bottom to $2.2$ at the top). 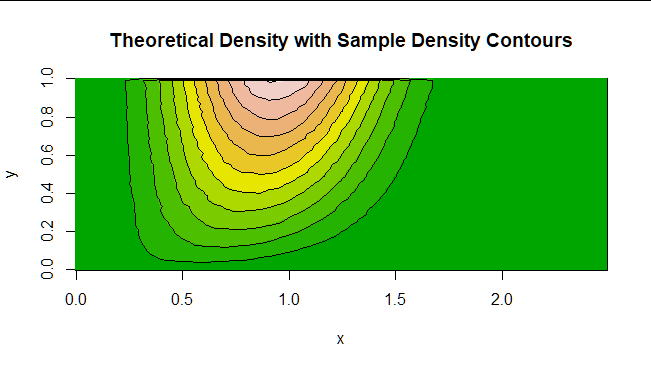 This problem had two obvious approaches: integrate out $y$ or integrate out $x.$ Both work, but the latter is so nasty I don't know how to do it by hand. The Wolfram Language 13 engine found an expression:

However, it doesn't know how to simplify or invert this function ;-).

Not the answer you're looking for? Browse other questions tagged simulation quantiles cumulative-distribution-function or ask your own question.