I am running a regression model in R including the following variables:

Categorical variables are dummy coded. I ran the following regression in R:

Results of this regression are found here under model 4: 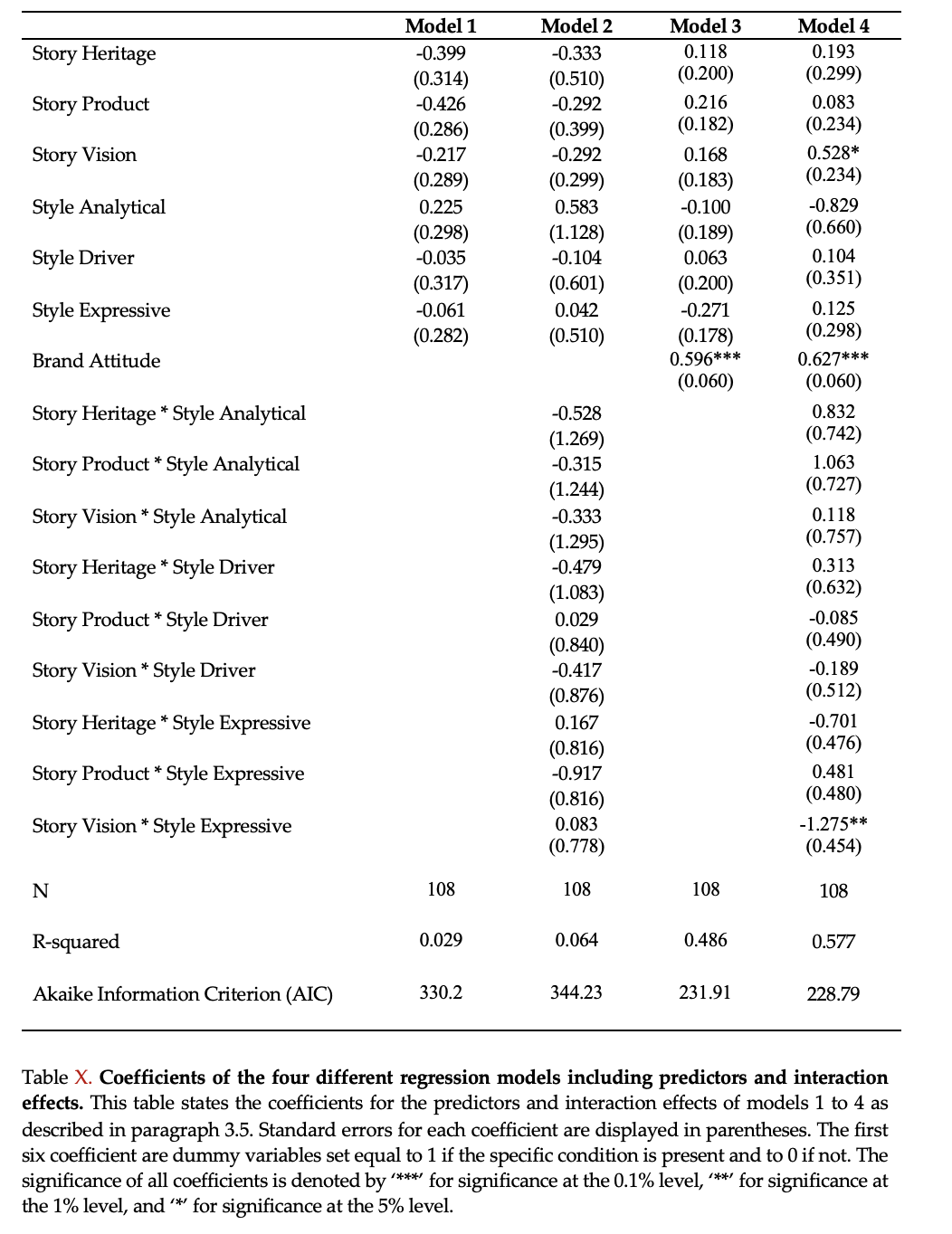 Naturally, R sets one story type and one style as reference groups, in my case the Consumer story and the Amiable style. My only issue is, how can I draw conclusions for these reference groups?

My goal is to be able to say "For Analytical styles, purchase intent is most positive when presented with a Product story". As the results show with a coefficient of 1.063 for Product*Analytical. But how can I derive a similar conclusion for Amiable people?

Any help is welcome <3

First, with the default R treatment coding of your categorical predictors, the individual coefficients for things like Story Vision are their associations with outcome when all other predictors are at reference (categorical predictors) or 0 levels (continuous predictors, like Brand Attitude seems to be). So the Story Vision coefficient is specifically for cases having Style Amiable. Similarly, the Style Driver coefficient is for cases having Story Consumer. The model intercept (which I don't see reported) is the expected outcome for a combination of Style Amiable,Story Consumer, and Brand Attitude = 0.

Second, although the interaction coefficient for Story Product : Style Analytical has a numerical value of 1.063, the high associated standard error (0.727) indicates that you can't reliably distinguish its value from 0. Don't over-interpret such values.

Third, your data set is probably too small to accommodate all of those interaction terms. In Model 4 you have 108 cases and 16 regression coefficients to estimate, for a ratio of less than 7/1. You typically need ratios on the order of 15/1 to avoid overfitting with this type of data. Your Model 3 (without interactions) has a more reliable 15/1 ratio. The slightly higher R-squared in Model 4 is probably from overfitting the data; that model that might not work well on a new data sample.

Fourth, you have shown that Brand Attitude is pretty strongly associated with outcomes. When you have enough data to support a model more complicated than Model 3, you might consider evaluating interactions of that predictor with the Style and/or Story categories, which might be more important than the relatively weak interactions seen between the various Style and Story categories.

@EdM makes valid points - read those first. Just for reference, you could get the effects of interest along with their confidence intervals using the emmeans package. For example:

this shows for example that A is the highest Style within Species setosa although A, B, and C are not convincingly different from each other.

Not the answer you're looking for? Browse other questions tagged r regression categorical-data interaction effects or ask your own question.