What is the product of two independent student t distributions? In which case does this product product result in another t distribution?

When $X$ and $Y$ are independent random variables with densities $f_X$ and $f_Y,$ the density of their product can be found with a change of variables as

Ignoring normalizing constants (we'll consider these at the end), for two Student t densities with $\nu$ and $\mu$ degrees of freedom this integrand is proportional to

Let's find a lower bound for $f(z)$ when $z$ is small. To do so, we may restrict the region of integration and we may replace the integrand by anything that never exceeds it. 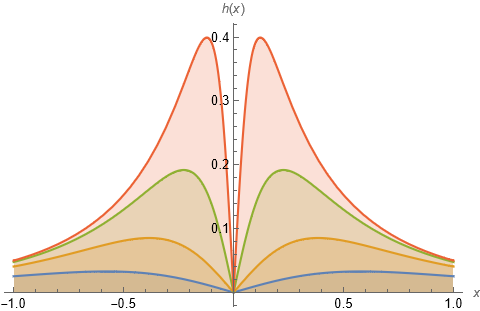 You can see that as $|z|$ approaches $0,$ there's more and more area pushed into this region. That's no surprise: we would expect the largest area (which corresponds to the highest density of the product) to be at the center of the product distribution, which (by symmetry) must be $0.$ But how large does it get?

The second inequality is a consequence of $z^2 \le 1.$

The factors before $1/|x|$ are constant (but nonzero), depending only on $\mu$ and $\nu,$ so again let's consider them later and ignore them now. As $x$ varies over just the positive part of this region it runs from $z/\sqrt{\nu}$ to $1/\sqrt{\nu},$ giving a lower bound proportional to

As $z\to 0,$ this lower bound diverges. Consequently, no matter what the constants of proportionality are that we ignored, $f_{XY}(z)$ diverges at $0.$

Here, to illustrate, is a histogram from a simulation of ten million products (with $\nu=\mu=1/2$). Almost a million of those products are represented. The red curve is the negative logarithm. Clearly it approximates the density well near zero. 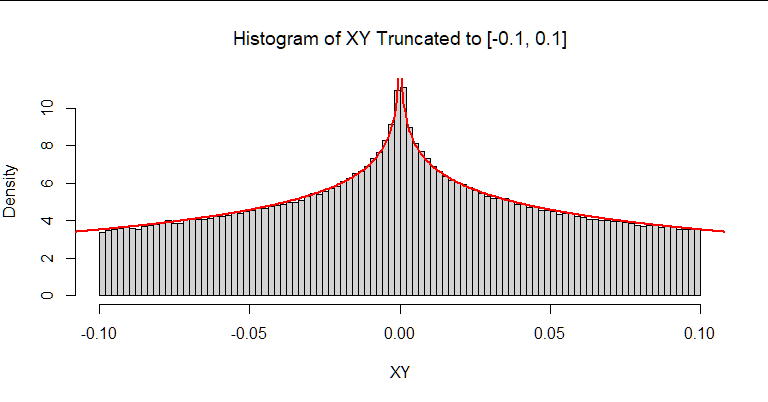 The product density can be found analytically as a polynomial combination of Riemann hypergeometric functions. Since this product is never a Student t distribution, though, I did not see any point into providing further details.

Not the answer you're looking for? Browse other questions tagged probability bayesian mathematical-statistics inference t-distribution or ask your own question.

1
Integration of the sum of gaussians over a line