What are the k-means algorithm assumptions?

I'm trying to understand what are the assumptions/hypothesis underlying the k-means clustering algorythm; specifically, I'm looking for a research/academic paper listing such hypothesis and explaining the ratio behind them.

Browsing on the internet, I found the following ones:

Can you provide some reference about?

Moreover, once you provided that, it would be nice to have the methodology steps to test for such assumptions.

Thanks all in advance!!

This is a complicated question, as I believe that the role of model assumptions in statistics is generally widely misunderstood, and the situation for k-means is even less clear than for many other situations.

Some statements regarding k-means:

(a) k-means is based on a variance criterion that treats all variables and clusters in the same manner, meaning that within-cluster variation tends to be the same for all clusters and all variables (the latter means "spherical").

(c) k-means strongly avoids large distances within clusters. This particularly means that if the data has groups with strong separation, k-means will find them (provided k is specified correctly), even if they are not spherical and/or have strongly different numbers of points. What this also means is that clusters will tend to be compact, i.e., not have large within-cluster distances, even if there are connected subsets in the data that spread widely and do have such large distances within them.

(d) One additional way to understand k-means is that it provides a Voronoi tesselation of the data space.

(a) Some say that "a key assumption of k-means is that the number of clusters has to be known." Not really. There are several methods in the literature that allow to fit k-means for different numbers of clusters and then will decide which one is best, either by optimising a validity criterion or by looking for a small number of clusters after which the objective function is no longer strongly (or significantly) improved. Look for Average Silhouette Width, Calinski & Harabasz criterion, gap statistic, Sugar and James approach, prediction strength, bootstrap stability etc. Now it is true that these different approaches in many situations do not agree. But the number of clusters problem ultimately comes with the same issues as the clustering problem more generally, namely that there is no uniquely defined true number of clusters, and an appropriate number of clusters cannot be objectively decided from the data alone but requires knowledge of aim and use of the clustering. The data cannot decide, for example, how compact clusters ultimately have to be. There are methods that come with an in-build decision of the number of clusters, but what I wrote before applies to them as well. Many users like an automatic decision of the number of clusters as they don't feel confident to make decisions themselves, but this basically means that the user gives the control about this decision to some usually not well understood algorithm without any guarantee that the algorithm does something appropriate for the application at hand (and if required, such decision rules are also available for k-means).

(b) Here is an older thread discussing k-means: How to understand the drawbacks of K-means. This focuses strongly on the "drawbacks" of k-means, and there are some good examples that help to understand what k-means actually does and doesn't do. As such that thread is very useful. However, I have an issue with pretty much all answers there, which is that they seem to implicitly assume that it is clear in any given situation what "the true clusters" are, but it isn't. No formal definition is given, people just show pictures and say "what k-means do is obviously wrong here", appealing to some supposedly general human intuition what the true clusters should be. Here is an example (taken from David Robinson's answer in that thread): 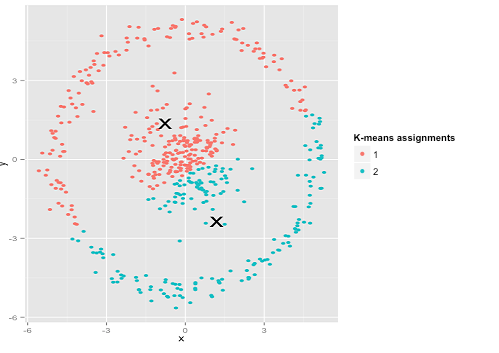 So k-means gives a counterintuitive solution here and the writer claims that the correct solution should be to have one cluster for the points around the outer circle and the other one for the inner point cloud. But no definition of a clustering has been given according to which this is the "truth". There is no scientific basis for this. True is that such a solution is desired in certain applications, particularly when mimicking human pattern recognition. But this is not what clustering always is about. Particularly, in some applications large within cluster distances are not acceptable (for example when clustering is used to represent small compact data subsets by their centroid for efficient information reduction), and then the supposedly "correct" clustering doesn't work at all (although the 2-means solution is arguably not much better, and a larger number of clusters should be fitted that respects the separation between outer circle and inner point cloud, which can well be done with k-means). The baseline of this is that k-means has a certain behaviour that may not be appropriate in a given situation, but this doesn't mean it's "wrong" in any objective sense.

There are a bunch of different algorithms that can be applied to the k-means inference problem, so the particular assumptions and statistical interpretation will depend on the specific algorithm you're using. Notwithstanding this generality, I'm going to assume that you're talking about the "standard" k-means algorithm that proceeds by minimising the within-cluster sum-of-squares for pre-specified values of $k$, where clusters are determined by distance from a set of cluster-means.

In this optimisation problem the clusters are determined by closeness to the means (each data point is assigned to the cluster for the mean that is closest to it in terms of Euclidean distance) and we minimise the within-cluster sum-of-squares of the resulting clusters.

Statistical Interpretation: Because this optimisation minimises sums-of-squares, the standard statistical interpretation is that it is equivalent to taking the maximum likelihood estimator (MLE) for a statistical model that is a "mixture" of $k$ Gaussian distributions with the same variances but with means given by $\boldsymbol{\mu}$, where each data point is taken to belong to the Gaussian distribution with the closest mean. In this interpretation, we reframe the obective function as:

where the index $R(i) \equiv \text{arg min}_r ||x_i - \mu_r||^2$ gives the group with the closest mean. Note that this is just one statistical interpretation for one algorithm for k-means — it operates by reinterpreting minimisation of a sum-of-squares as maximisation of a normal density. There are other interpretations that can be given for other variants of the algorithm; since there are many different algorithms there are many different statistical interpretations and the general problem is complex.

Not the answer you're looking for? Browse other questions tagged hypothesis-testing clustering references k-means assumptions or ask your own question.

429
How to understand the drawbacks of K-means

3
What are the assumptions of the Games-Howell multiple comparisons procedure?
1
Alternative of canopy clustering algorithm in K-means algorithm
4
Why is the k-means++ algorithm probabilistic?
8
k-means++ algorithm and outliers
2
Normalization/Standarization for Clustering visualization
6
Unsupervised outlier detection in 2D space
1
Approach to clustering a large data frame (~7M * 60) with different data types
1
What does it mean for the k-means algorithm to be trapped in a local minimum?