Is the square root of the symmetric Kullback-Leibler divergence a metric?

I think the following upper and lower bounds hold:

Both of the square root of the bounds are metrics, I suppose, since they are the square of the Euclidean distances in the probability space and the log-prob space respectively.

No, the square root of the symmetrised KL divergence is not a metric. A counterexample is as follows:

However, for $P$ and $Q$ very close together, $D(P, Q)$ and $J(P, Q)$ and $S(P, Q)$ are essentially the same (they are proportional to one another $+ O((P-Q)^3)$) and their square root is a metric (to the same order). We can take this local metric and integrate it up over the whole space of probability distributions to obtain a global metric. The result is:

I worked this out myself, so I'm afraid I do not know what it is called. I will use A for Alistair until I find out. ;-)

By construction, the triangle inequality in this metric is tight. You can actually find a unique shortest path through the space of probability distributions from $P$ to $Q$ that has the right length. In that respect it is preferable to the otherwise similar Hellinger distance:

One case of theorem 2.2 in this paper says that if we define (for positive numbers rather than whole probability distributions) $S(p,q) = (p-q)\log(p/q)$ then $\sqrt S$ is a metric.

(I haven't looked at the paper closely enough to vouch for its correctness, but in any case you have no more reason to trust me than to trust its author :-).)

EDITED in the light of the now-accepted answer to add: So, clearly it is not true that $\sqrt S$ (as in my first paragraph above) is a metric. And indeed it isn't; specifically (taking the counterexample in that answer as inspiration) we have both $S(0.1,0.2) + S(0.2,0.3) < S(0.1,0.3)$ and $S(0.9,0.8) + S(0.8,0.7) < S(0.9,0.7)$. Unless I'm gravely misunderstanding the paper I linked to, that means its theorem 2.2 is incorrect. This theorem is concerned with a generalization of this $S$, taking the $S$ we're actually interested in here as a limit of something more tractable; it seems to be false for the more-tractable thing too, so the problem is there rather than in the passage to the limit.

They say that the properties of metrics are:

1) Because it is absolute value, the non-negative is satisfied

3) IDentity (in a measurement sense) is satisfied. The natural log of one approaches zero. Neither square root nor absolute value change this.

In order to satisfy the requirement, the following must be true:

You can see the general form of $ abs(log(x))$ where x is the ratio of likelihoods for your PDF's of interest. Are there any places where the triangle inequality is violated? 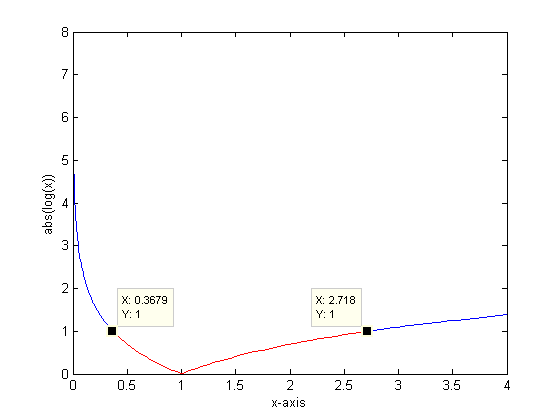 I'm not sure how to engage this right now and will come back later. At this point, without the absolute value, the KL or sqrt(KL) is broken as a metric.

I was using a simplification of KL as $ KL = \sum_{i=1}^{N} {p(x_i) ln \left ( \frac {p(x_i)} {q(x_i)}\right )} $ being treated as $ KL_2 = \sum_{i=1}^{N} { ln \left ( \frac {p(x_i)} {q(x_i)}\right )} $ because the linear scaling isn't going to impact the nature of the metric space. The $ a_i$ is going to be (for my distributions) continuous and smooth. It could be argued that Gaussian Mixture Models (GMM's) provide a sufficient basis to represent any distribution to arbitrary precision in an analogy to Fourier Series basis for time-series signal data, but such arguments are sample size constrained.

The same sort of argument can also be made for the symmetric KL divergence.

Not the answer you're looking for? Browse other questions tagged kullback-leibler metric or ask your own question.

4
Kullback-Leibler Divergence for Graph Sampling
7
$\min D_\textrm{KL}(p(x_1,\dots,x_n) \mid\mid q_1(x_1)\cdots q_n(x_n))$ gives the marginals of $p(x_1,\dots,x_n)$?
2
Appropriate divergence measure for a distribution over ordinal values
8
What is the intuition behind the Population Stability Index?
2
Kullback–Leibler divergence when one measure is a sum of diracs
8
Why Kullback-Leibler in Stochastic Neighbor Embedding
3
Does it make sense to use the KL-divergence between joint distributions of synthetic and real data, as a evaluation metric?
1
What are the advantages of Wasserstein distance compared to Jensen-Shannon divergence?
4
Does maximizing Jensen–Shannon divergence maximize Kullback–Leibler divergence?