Large neural networks have low bias and high variance. Training on large datasets greatly reduces the variance allowing them to fit complicated functions. My question is why they seem to have much lower bias than other machine learning models, regardless of how flexible you make the other models. [EDIT thanks for comments - this framing is murky because it's not clear how much of the performance improvement could be attributed to lower variance due to the double descent phenomenon].

It's purported that if you plot amount of data vs performance, neural networks tend to not to plateau as quickly. One could argue that this has something to do with being a universal function approximator, but this apparently applies to other models like kernel methods as well. 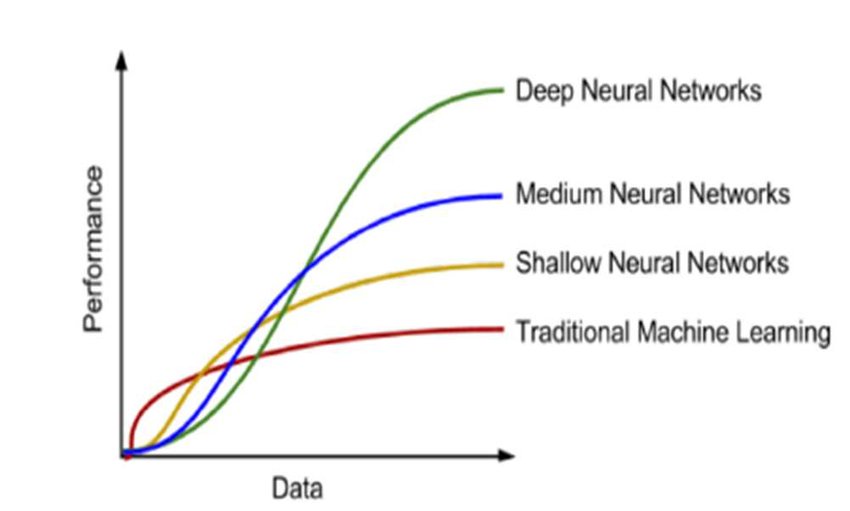 What about neural networks makes them especially good at working in regimes with large amounts of data compared to more traditional models which can also be made to be arbitrarily flexible?

I can only speculate it might have something to do with the following (but I can't find definitive sources):

The existence of a bias-variance tradeoff has been assumed as inevitable (i.e., an axiom) in any model using data, including neural networks.

However, it has been observed since about 2018 that surprisingly, some cases of very large deep neural networks, trained with a correspondingly sufficiently large dataset, do not exhibit the classical bias-variance tradeoff. This means that these networks also generalize better. This phenomenon, termed "double descent", has been duplicated by other researchers. See for example: "Reconciling modern machine-learning practice and the classical bias–variance trade-off", 2019, by Belkin, Hsu, Ma, Mandal, https://www.pnas.org/doi/10.1073/pnas.1903070116.

As of 2022, conclusively explaining this phenomenon is still an open research question, but there have recently been interesting inroads to answering it. For example, the following paper is a theoretical explanation to justify this mysterious phenomenon: "A Universal Law of Robustness via Isoperimetry", 2021, by Bubeck and Sellke, https://arxiv.org/abs/2105.12806 (Outstanding Paper award at NeurIPS 2021)

Emphasis: This "double descent" phenomenon does not occur in all deep neural networks trained with a correspondingly sufficiently large dataset. Rather, according to Bubeck and Sellke, it depends on the number of input data points, the effective dimension of the classification, the depth of the network (number of layers), and the overall number of parameters in the network.

Therefore, in other cases, neural networks, even deep ones, will still exhibit the bias-variance tradeoff.

In a sense, this guidance on parameter values in the Bubeck and Sellke paper can be regarded as a falsifiable prediction as to whether their analysis/explanation is (in)correct.

Bias-variance trade-off is an old fashioned concept from classical statistics which fails to be useful in high-dimensional setting.

Here's an example of famous statistician being surprised that overfitting is reduced by increasing the number of parameters in linear regression.

A better way to explain good performance of neural networks is through the lens of statistical learning theory. One direction of work shows that if A) your learner is not very sensitive to small changes in your training set, and B) fits training data data it will also fit test data. See for instance, this paper by Bousquet.

B) is actually the harder part, much of modern progress in NN's has been achieved by coming up with clever ways of fitting the training data and ignoring generalization aspect.

There are other theorems in mathematical analysis about converging to decent functions (the Stone–Weierstrass theorem about polynomials and Carleson's theorem about Fourier series come to mind). However, neural networks decrease the bias more than other regression models by taking to the extreme the idea of nonlinearity and interaction. A neural network with millions of parameters is routine. A generalized linear model with millions of parameters, due to nonlinear basis functions (e.g., polynomials or splines) and their interactions, is not as common. If you put in all of those nonlinear features and their interactions in a generalized linear model, taking it to a similar extreme as a neural network, I would expect similar issues of high variance and low bias.

In fact, there is a sense in which a neural network (at least some of them) involves a layer (or multiple layers) of feature extraction and then a generalized linear model on the extracted features. After all, if you draw out the usual "web" of a neural network and cover up everything before the final hidden layer, you wind up with something that looks like a generalized linear model.

Sidenote: It depends on the situation

But still, the question is a fair question. The observation that over-parameterized models perform surprisingly good in particular settings, without overfitting (and whether this is only with neural networks or not is actually not relevant), that is not something unreal.

The over-parameterized networks are susceptible to fitting noise, but the simplest patterns are easier to learn and will become dominant. This is either due to some explicit regularization (obvious in ridge regression or Lasso) or due to some implicit regularization like limits on learning rates and stochastic decent. In this respect an example that more parameters work better is seen in this question: Is ridge regression useless in high dimensions ($n \ll p$)? How can OLS fail to overfit?.

Another effect could be that the multiple parameters work a bit like gradient boosting and are being blended together. When we spèeak about gradient boosting then there are also a lot of parameters fitted, more than the number of data points, but the method uses some average and we consider it not really as increasing the flexibility. This can happen in some similar way in deep neural networks and the first layers create several parallel pattern recognition models that are blended together in other layers.

777
How to choose the number of hidden layers and nodes in a feedforward neural network?
67
Is ridge regression useless in high dimensions ($n \ll p$)? How can OLS fail to overfit?