Consider the generalized hyperbolic distribution given by (from wikipedia): 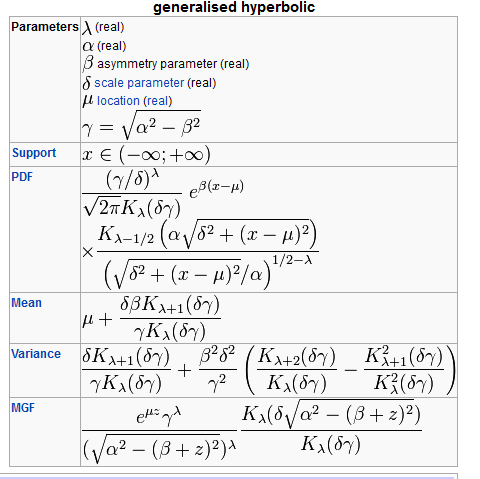 So I now wanted to derive the standardized version, so mean zero variance one. I wanted to do the following:

My question is now: Can I do this, I mean, is this correct?

There are now different ways of rewriting and solving. I can compute a solution, in which the final equation depends on $\alpha$, $\beta$, and $\delta$ and $\mu$ fixed, or, there is e.g. a solution in which the final equation depends only on $\mu$, and $\delta$ and $\alpha$ and $\delta$ is fixed. So both would fulfill the requirement of mean zero and variance one. I think by going the way I proposed in case of the GHYP above, there is the same problem, that this is only one solution, but there exist other combinations, in which the mean zero and variance one equation is still fulfilled.

So: What would you do in such a case?

Section 2.3.5 of the following manual

This question is a duplicate of Standardized generalized hyperbolic distribution

Not the answer you're looking for? Browse other questions tagged standardization or ask your own question.

1
Standardized generalized hyperbolic distribution
0
How does dsgh work in R?