How does PC-ORD calculate the amount of variation captured by each axis in NMDS?

I've always been taught that a major downside of NMDS is that there's no way to calculate the amount of variance captured by each axis. Variance doesn't come into the calculation at all so this made sense to me. However, PC-ORD claims to be able to estimate the amount of variance explained by each axis in their demo here starting at 12 minutes. In the video, an NMDS is performed and the output obtained is shown in a screen capture below: 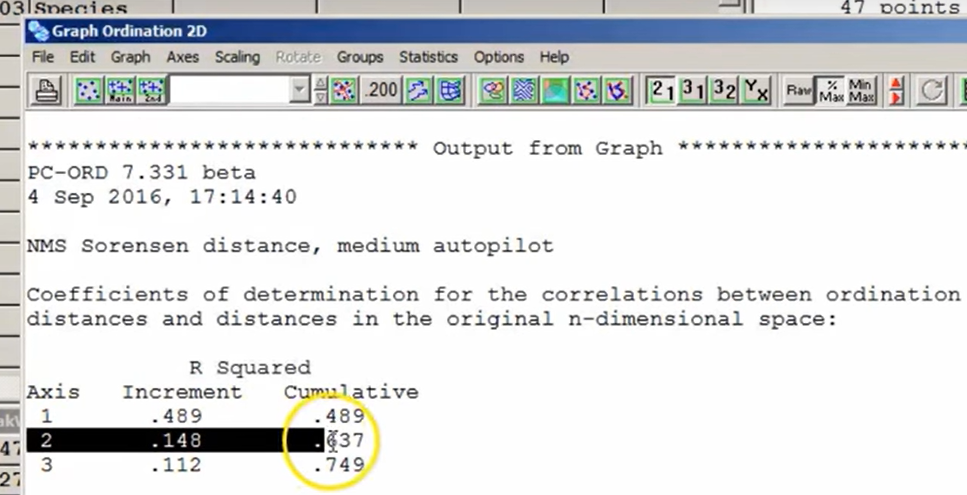 with R$^2$ values for each axis. The narrator says that "the 2D solution represents 63% of the variation in the distance matrix". I thought this was impossible and that the axes in NMDS were arbitrary. Am I misinterpreting the statement made here? If not, is it possible to do something like this in R?

Not to muddy the waters, but in the NMS chapter of Grace and McCune's Analysis of Ecological communities (chapter 16) their list of "What to report" includes "Proportion of variance represented by each axis, based on the r squared between the distance in the ordination space and the distance in the original space".

7
R-squared: X "explains" the percentage of variation of the Y values. Does axis order matter?
8
How to calculate the R-squared value and assess the model fit in multidimensional scaling?
10
How do you calculate the standard error of $R^2$
0
Dimension reduction: how do we know whether the reduced variables have already captured most information of the original higher-dimensional variables?
7
Multiple regression - how to calculate the predicted value after feature normalization?
2
If I remove a variable from a regression, does the change in R squared reflect the amount of R squared contributed by that variable?
1
Are NMDS Axis the same calculated for one or more dimensions?
0
How do I calculate the average coefficient of variation?
1
How does the TraMiner Package Calculate Standard Error Using Weighted Data?