Is the exact value of any likelihood meaningless?

While reading about likelihood, I have heard that "the exact value of any likelihood is meaningless" why?

So, because of that we may use the likelihood ratio.

So, my question is, why the exact value of likelihood is meaningless? And what is the benefit of likelihood-ratio over the likelihood?

It's “meaningless” in the sense that it's very hard to interpret, it's just “the bigger, the better”. That is the case because the likelihood is not probability and it is calculated without normalizing the constant so the numerical value can be any non-negative number. You still can maximize the likelihood because lack of normalization doesn't matter for optimization. See other questions tagged as likelihood for more details like What is the reason that a likelihood function is not a pdf? or What is the difference between "likelihood" and "probability"?.

When we use likelihood then we are comparing probability (density) of the data given a certain hypothesis/theory.

The actual probability is not important. It can actually become extremely small. Imagine that you are testing whether a coin is a fair coin and you observe 1000 000 flips with 500 000 heads and 500 000 tails. If the coin is fair (equal head and tails probability), then the probability of this particular observation is 00.0007978844.

The likelihood function is usually taken to be the PDF viewed as as a function of parameters for known data.

For example, if I have a coin with Heads probability $\theta$ and toss it $n = 10$ times, getting $x = 3$ heads, then I can take the likelihood function to be

So the values of the likelihood function might be considered less important than its shape, which leads to the MLE $\hat\theta.$ 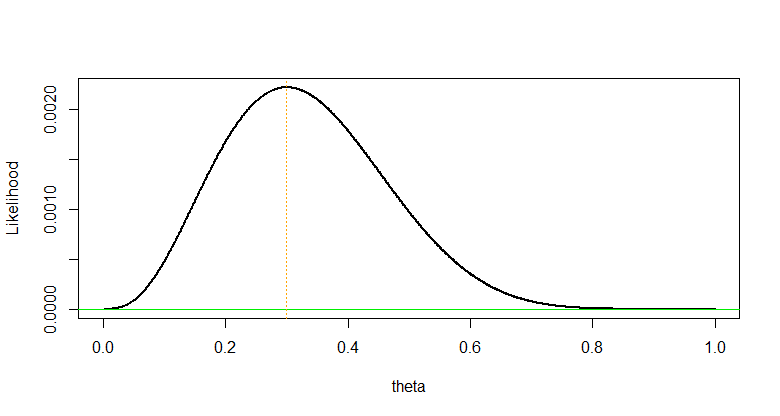 An important concept that should be mentioned in the context of this discussion is that of the Likelihood principle (See also Berger & Wolpert's book). The likelihood principle, which is one of the foundations of Bayesian statistics, states that all the evidence relevant to a model parameter $\theta$ is contained in the likelihood function $\mathcal L(\theta | x) = f_X(x|\theta)$.

The precise statement of the likelihood principle is that if two experiments about the same parameters $\theta$ are proportional to each other, namely if

with $c$ some positive constant, then the evidence on $\theta$ from the experiments is identical. In this sense, the likelihood is only meaningful (as evidence) up to a normalizing constant.

Frequentists statistics in general violates the likelihood principle, so discussion of the meaning of likelihood from a frequentist perspective is somewhat meaningless by itself. But practically most if not all frequentist uses of the likelihood function are via quantities (such as likelihood ratios or the maximum likelihood estimator) that are also invariant under scaling,

@Henry and @JonathanLew firmly pointed out errors in my original answer, which tried to argue that the statement "the exact value of any likelihood is meaningless" is glib and that you can't prove a logical claim about all likelihoods by providing specific examples where it's safe to compute the likelihood up to a constant.

Since I first posted my answer I've learned that continuous likelhoods have (theoretical) units given by 1/(units of the data) from @apdnu's answer to Units for likelihoods and probabilities.

I also searched for concrete examples where likelihood function has to be computed exactly to get the correct answer.

This example is from Chapter 9 of C. M. Bishop. Pattern Recognition and Machine Learning (2006).

We want to model a dataset of binary observations as a mixture of $K$ Bernoulli components with parameters $\{\mu_k\}$ and mixing proportions $\pi_k$. The log likelihood is:

Since there is a summation inside a logarithm, the math doesn't simplify but the maximum likelihood solution can be found with the EM algorithm.

This example is from Chapter 4 of K. P. Murphy. Machine Learning: A Probabilistic Perspective (2012).

We want to test the hypothesis $\mu > \mu_0$ for some known value of $\mu_0$. The p-value for an one-side t-test is an integral over the likelihood

We can't omit any terms inside the integral or we won't compute the p-value correctly.

In summary, there are both theory and examples to illustrate that the exact value of the likelihood function can be meaningful.

The statement "the exact value of any likelihood is meaningless" is abstract and imprecise at the same time. So let's start with the definition of likelihood. In the spirit of this question, the definition isn't mathematically rigorous.

We take a probabilistic model f(x,θ) for data x with parameter θ.

It's true that the likelihood doesn't integrate to 1. Many functions don't, yet we don't conclude that their exact value is meaningless.

A common theme running through the answers is that likelihood computations often simplify. The logical argument seems to go something like this: in many computations a term in the likelihood is constant or behaves like a constant so we can simplify the math by dropping that term; ergo the exact value of a likelihood function is meaningless.

However, the likelihood has more uses than maximizing it to find the MLE or performing a likelihood ratio test. And a likelihood term that can be ignored in one computation is important to keep track of in another.

Not the answer you're looking for? Browse other questions tagged likelihood intuition likelihood-ratio or ask your own question.

622
What is the difference between "likelihood" and "probability"?
91
What is the reason that a likelihood function is not a pdf?
5
Units for likelihoods and probabilities
3
Calculate AIC for both linear and non-linear models