Can spurious correlations exist in the (theoretical) population?

Is it possible that spurious correlations exist between two random variables X and Y in the (theoretical) population (here I mean purely by chance, not due to missing confounders in a model, etc.)?

As suggested in Ben's answer in the thread "Spurious relationships: flavours, terminology", the qualifier spurious can be attributed to our interpretation of some statistical finding. We may have a nonzero correlation between $X$ and $Y$ in a population (or determined by a data generating process) where neither $X$ causes $Y$ nor $Y$ causes $X$. (Monthly ice-cream sales on a beach and drownings on a neighboring beach would be a good example. Both vary seasonally due to weather conditions and working vs. holiday periods, so they will be positively correlated, yet none causes the other.) Interpreting this correlation as if $X$ causes $Y$ or the other way around would be a spurious interpretation.

(Focusing on a population instead of a sample rules out the case where a correlation is estimated to be nonzero while it is actually zero in population / by a data generating process. Some practitioners would call such a finding a spurious correlation.)

The term 'spurious correlation' dates back to at least Pearson 1897 "On a form of spurious correlation which may arise when indices are used in the measurement of organs" where he describes the correlation between two variables that are a function of other uncorrelated variables, e.g. x/z and y/z will often be correlated even though x,y,z can be uncorrelated (and this has consequences to comparisons like, for instance, made in biology where relative lengths are compared)

However, in this case the correlation is not wrong/spurious. Ice-cream sales and beach drownings are correlated. It is the interpretation that is wrong. This case would be better described as 'spurious relationship'.

A typical example of collider bias is the relationship between pretty people being often stupid and smart people often being ugly. The image below shows how this correlation might not be true and only seems to be present when we condition on a third variable.

For instance in the image below the green points are cases when prettiness + smartness is above some level. This might relate to the people in the media often being successful or talented people which requires a minimum level of a combination of certain traits. The correlation is only present in this sub-selection and underlying the relationship there is no direct causal relationship between prettiness and smartness. But even stronger, there is also no direct correlation between prettiness and smartness. It is the selection/measurement/presentation of the variables that makes the two correlated. 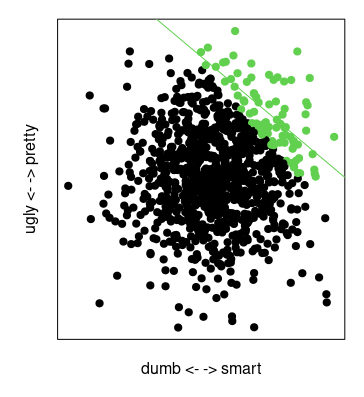 Note that collider bias is the opposite of confounding.

So confounding is an example of spurious correlation that may occur without a confounder variable.

A way how correlations may be likely found, without an underlying direct causal relationship, but just statistical variation, is when correlation between time series are compared.

See also this question Why do these time series appear to be dependent? and a classical work dealing with these type of correlations is written by Yule in 1926 "Why do we Sometimes get Nonsense-Correlations between Time-Series?--A Study in Sampling and the Nature of Time-Series". Or even earlier "The Elimination of Spurious Correlation due to position in Time or Space" by Student (WS Gosset) in 1914.

In the other cases there is still in some way or another some causal relationship present (only not directly between the two correlated variables). In this case with time series there is a complete absence of an underlying causal relationship, even indirect, but the correlations arise by chance (and the chance/probability is underestimated, it occurs much more often than what people assume with their test).

Not the answer you're looking for? Browse other questions tagged probability correlation random-variable population spurious-correlation or ask your own question.

8
The fallacy of correlating some time series values with specific time points: is there a specific name for it or are there references?
7
Spurious relationships: flavours, terminology
1
Why do these time series appear to be dependent?

1
Can negative relationship between X and Y be spurious
11
Misunderstandings of "spurious correlation"?
1
Technique to find spurious correlations among huge number of time series datasets?
0
How can I test the relevance of variables on a dependent variable when I have data for an entire population?
7
Spurious relationships: flavours, terminology
1
Will the coefficients of an error correction or lasso-penalized model usually reveal spurious correlation?
12
Correlation without Causation