What are "poor finite sample properties"?

In MacKinlay’s (1997) well-known article about event study methodologies, he states that there are two ways event clustering can be accommodated in event studies. Event clustering means that event windows of some observations overlap in calendar-time, resulting in overstated significance, because observations are no longer independent. One methodology to counter event clustering is the calendar-portfolio approach and the other is “to analyze the abnormal returns without aggregation. One can consider testing the null hypothesis having no impact using unaggregated security by security data… The basic approach is an application of a multivariate regression model with dummy variables…” (MacKinlay, 1997, p. 27).

The two drawbacks of using this approach of a regression model with dummy variables are that: “frequently the test statistic will have poor finite sample properties except in special cases and often the test will have little power against economically reasonable alternatives” (MacKinlay, 1997, p. 27).

Is this what MacKinlay refers to as “poor finite sample properties”?

In the context of hypothesis tests, poor finite sample properties usually mean that the actual rejection rate of the test differs from the nominal one.

Recall that the nominal one is the level at which you are testing, often 5%. That means that you expect to reject 5% of all correct null hypotheses. If the actual rejection frequency differs from the nominal one, we have what is known as a size distortion.

[So the answer to your question is basically yes, many dummies will lead to a low effective sample size (a.k.a. eat up degrees of freedom) - there no such thing as a unique threshold for "small" sample sizes. E.g., in problems with many parameters, such as long regressions, more data is needed for good inference than in simpler problems.]

Hence, its quantiles will differ from the quantiles of the asymptotic distribution, where the latter are used to get critical values. Thus, the test statistic will not exceed the critical value (i.e., reject) as often as expected from the nominal level.

Here is a simple example (a little Monte Carlo study that simulates the actual rejection rate of a test):

What does the code do? It

Depending on the seed, this code will return values of around 0.17, where, if the test had good finite-sample properties, we would see 0.05. In other words, instead of rejecting every 20th correct null hypothesis, as one might think it does based on the nominal level, it rejects every 6th, thus leading us to reject the null (quite far) too often.

[In practice, information such as the one used here that we sample from a certain distribution is not available, so that we will not easily be able to work with more accurate critical values. If I had run the code with, say, draws from a symmetric mean-zero such as a t-distribution with small degrees of freedom, we would have still seen some size distortion, but much less.]

[Is a size distortion that leads to rejecting too infrequently bad, too - after all, it leads to a smaller type I-error rate? I'd say yes, because rejection rates do not change discontinuously at the margin of null and alternative - hence, if you reject too infrequently if the null is true, you'll also reject less frequently when it is false, i.e., you'll have low power.]

If you replace 10 in the code with, say, 1000, you will get values much closer to the nominal level 0.05, illustrating that the problem is a finite-sample one.

Trying this for different $n$ would produce something like this: 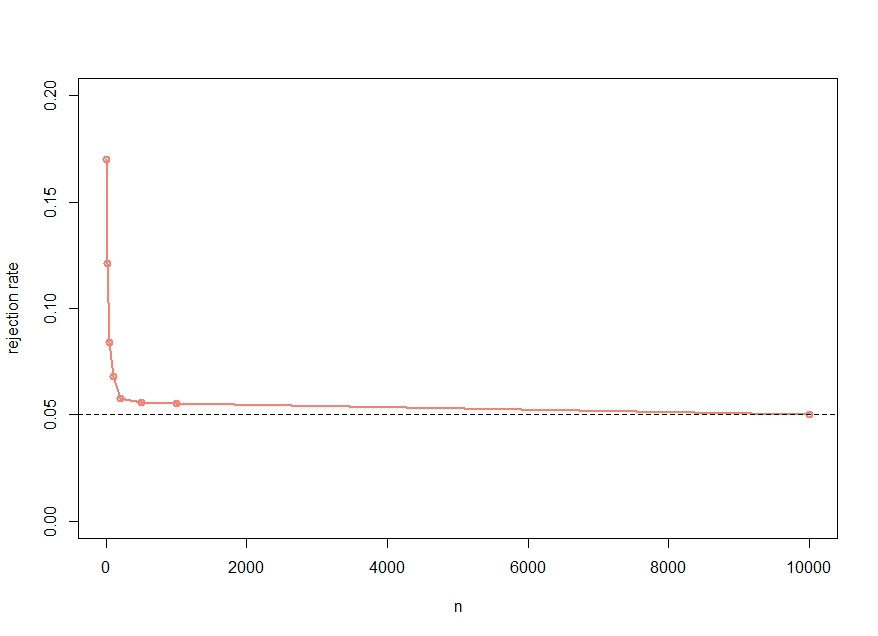 Not the answer you're looking for? Browse other questions tagged regression hypothesis-testing asymptotics small-sample finance or ask your own question.

3
Is there a version of the central limit theorem which lets me replace Var(X) with the sample variance?