Linear relationship seems to depends from one value: would bootstraping help?

In a sample of 45 individuals, I am looking at a relationship between two parameters (Annual_SOM_rate and Share_temp_past). When I calculate the p-value of the slope (linear regression), the result is significant: 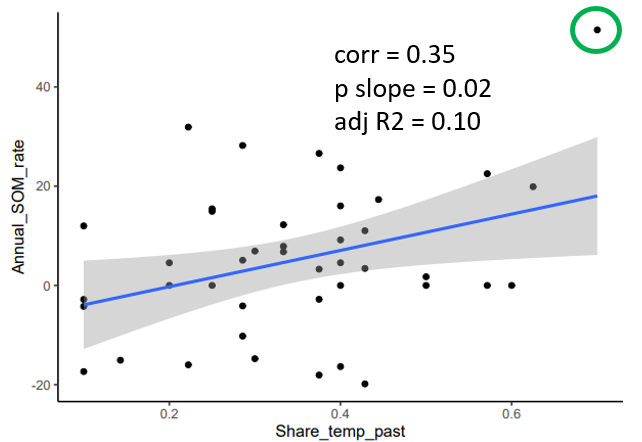 However, the significance disappears when I omit the value in the top right corner (green circle). Although a little bit "alone", this value makes total sense from a practical point of view (we cannot discard it as an error). If I extend this argument, would removing other value also impact the relationship?

My question: which statistical operation would help me conclude if the relationship that I observe here is truly significant or not?

If I extend this argument, would removing other value also impact the relationship?

Almost certainly yes. The regression line slope depends on all observations, so removing any point will change the estimate, and therefore also the $p$ value.

Removing a data point may or may not move your $p$ value above or below the magic threshold of $p < .05$.

which statistical operation would help me conclude if the relationship that I observe here is truly significant or not?

Thus, if you have no reason to suspect a data error, you should take your $p$ value as it is. It would be good to be cautious about any conclusions you draw and note explicitly that significance depends on a single data point. Also, note that the difference between the slopes you estimate with and without this one data point will probably in itself not be significant (Gelman & Stern, 2006).

Bootstrapping is just another way of looking at given data. It will give slightly different results. You may get $p<.05$ with the full dataset with a bootstrap - or not, and the same if you omit this observation. (And as above, a bootstrapped and a parametric parameter estimate may not be significantly different.) If all you are interested in is significance, then I would not worry overly about differences between a parametric and a bootstrap analysis.

Edge cases like these are one main reason to be careful not to over-interpret statistical significance. If you want more precision in your estimates, there is no way around collecting (a lot) more data.

Not the answer you're looking for? Browse other questions tagged regression statistical-significance bootstrap jackknife or ask your own question.

20
Why would one suppress the intercept in linear regression?
3
Investigating covariates in mixed effect model
2
What value does one set, in general, for the null hypothesis of β0 in a linear regression model?
3
If a regression term doesn't do what it was intended to do, is it alright to remove it?
0
Logistic regression (with dummy variables)
0
Regression - Poor Outcome from Linear Models that seems easy to improve
1
Cox regression assessing joint relationship between baseline groups? JAMA example
2
Linear relationship from Scatter Plot