Subgroup of one study in a meta-analysis

These RCTs have reported their outcomes at different time points.

I decided to split the data of these studies into sub-categories, depending on the time point at which they reported their data.

After that, I ran an analysis on the whole data-set to generate a pooled effect estimate.

My problem is: The sub-categories of 12 months and beyond contain only a single study(see the picture provided below).

Do I have to cancel these sub-categories from the analysis since they do not represent pooled data? or is it correct to keep them since the primary intent is to analyze the whole data-set instead of an individual sub-category? 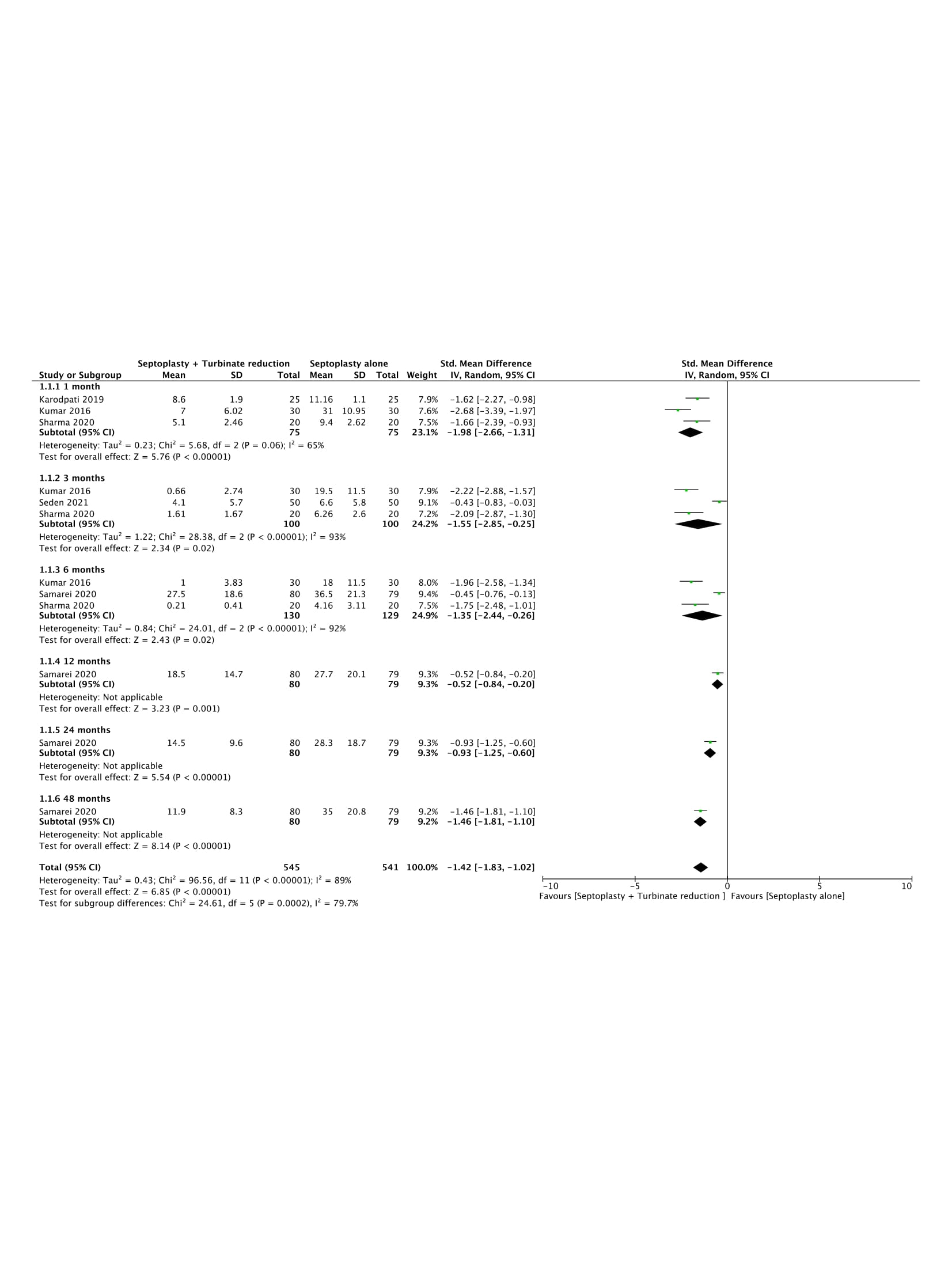 To properly answer this question, we have to back to the basics of the meta-analysis methods employed. The analyses assume that the units (e.g. randomized patients) are independent from each other. In this case, they are not as the same patients were evaluated at different time points (e.g. 1, 3, 6 months, etc.). Therefore each patient/ study should be included in the analysis only once. That can be the longest follow-up reported for each study, it can be the longest follow-up across studies, etc. Clinical expectations also plays an important role here as the interventional effect may not be expected to last once the intervention is no longer given.

Another option is to use a hierarchical model, or simulate it by first pooling studies with multiple time periods into a single study. For this not to have the same issues as before (e.g. unit of analysis error), you will have to divide the number of participants across the number of times the study is being included in the analysis (e.g. 30 patients over three time periods = 10 patients per time period). That will prevent over-estimating the precision of the trial after pooling. Of course, this method doesn't come without assumptions. For example you assume that length of following is independent from the effect estimates and the differences based on time periods is due to random chance.

In practice, we usually use the longest follow-up per trial and perform a subgroup analysis separately for hypothesis generation.

Not the answer you're looking for? Browse other questions tagged meta-analysis heterogeneity or ask your own question.

57
What is a difference between random effects-, fixed effects- and marginal model?
4
Mixed-effects meta-regression with nested random effects in metafor vs mixed model in lme

4
How to perform meta-analysis comparing different proportional mortality ratios of subgroups?
2
Methods of Meta Analysis
1
Is it possible meta-analyse results with no reported correlation between exposure and outcome?
1
COMPARISONS OF ODDS RATIOS
2
Should we do a meta-analysis of non-inferiority trials?
2
Are meta-analyses only secondary analyses which require uses of the post-hoc statistical methods?
6
Subgroups in meta-analysis