I have an algorithm that I wrote in Python that was able to find the grid in the image above and many like it, but was hoping to find a more robust algorithm in Python or R.

I used NumPy for the data, KDTree from SciPy for segmenting, and ols statsmodels.formula.api for the parallel slopes model.

Example Dataset
Note: This is not the same points from image because I generated these randomly at a later time.

An Update in the TLDR Category

Purpose
I was hoping to keep the question more general because I find it to be a interesting statistics problem. Keeping it general keeps the assumptions to a minimum. For example, my first solution assumed the grid would be uniformed and aligned with the axes of the coordinate system in a Euclidean plane (i.e. not rotated). I was wrong, so my solution failed in many cases. A more detailed question could also introduce biases and lead to going off on tangents (e.g. data collection).

That said, this algorithm is meant to determine a grid of objects in a digital image (no gridlines, just objects). The data points come from the results of contour or edge detection using OpenCV. Examples include an image with a grid of headshots, a street grid, a lattice in a SEM image, etc. The points are noisy or missing because different shadings can have significant effects on contour detection. Another example is using face detection in locating headshots. The headshot photos (rectangles) might line up on a grid, but the faces are not aligned or not detected.

The images typically don't contain more than 200 points, rotated more than 10 degrees, or missing more than 20% of points. The origin of the coordinate system is the upper-left corner of the image. I'm still keeping the assumption of orthogonality, but that could be an issue if an image is skewed.

Python Code
I originally asked this question on stackoverflow two years ago (July 17, 2020). I didn't receive an answer until three weeks ago and that was for converting my initial code based on lists — that I never even used — to numpy. I then posted my solution answering my long forgotten question after I had some renewed interest.

My code runs in 0.018 seconds for the example points provided, and 0.30 seconds for a 12x16 grid of points. It runs at around a 99% success rate for a Gaussian distribution of errors of around 3% of the avg x and avg y-coordinates. In other words, 1% of the time there will be a few points too far out on the tails of the distribution.

Issues
As with any model, problems arise when the residual noise level becomes too high. Regarding the 1% fail rate of my code, removing outliers would probably help since a few more missing points would not likely have a significant impact. Noise can make finding the correct reference line an issue which comes down to finding the correct angle of rotation of the grid. A possible improvement could be to segment the points w.r.t. slopes relative to their k-NN's. Noise or an extraneous point can also be an issue when segmenting the points w.r.t. to distance from the reference point in that it could create an additional gridline.

Because the streets are on an irregular orthogonal grid, the Fourier Transform solutions--although clever--will likely fail. The following approach exploits two ideas:

The link explains and illustrates the Hough transform and the Mathematica code I am using. Here is the gist of it, as extracted from the second paragraph:

Please refer to the rest of that post for further explanation and code. Here, I'll simply take you through the workflow with your example (the dots in the left image).

Import the image and crop it.

Combine the image with its 90 degree rotation.

I also downsample it for speed and because coarsening the resolution is a crude kind of windowed smooth that helps identify points that line up. Various forms of additional smoothing will appear further below without comment. The amount of smoothing is a matter of trial and error but good results are quickly found.

Notice how much more clearly the orthogonal geometry of the street intersections comes through in this combined image.

[Edit: I made a mistake here. The commented-out line performs the 90 degree rotation; the final line rotates by 180 degrees. I intended to comment out the last line only. The result of this error is to produce an inferior solution--the one shown below--but it still illustrates the ideas, so I have left the figures as is.]

The output varies a little depending on choices made previously, but the variation is consistent with the amount of noise apparent in the original image.

Rotate the original to make the grid appear isothetic (parallel to the coordinate axes). 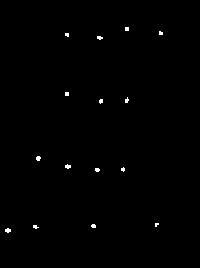 Smooth row and column sums to plot the marginal distributions of intensity.

"Streets" run left to right; "avenues" run straight up and down. 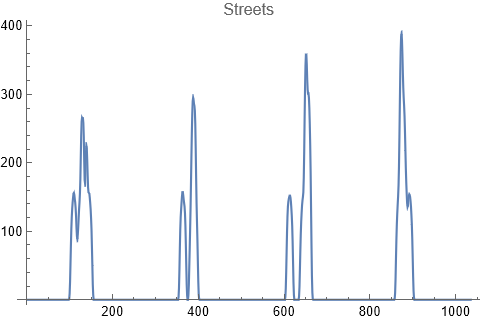 You can post-process the locations of the peaks to identify the coordinates of the "street" centerlines. The values along the horizontal axis are pixels indexing the cropped image I have been using.

Here is a plot for the transpose of the image data (the code is essentially the same): 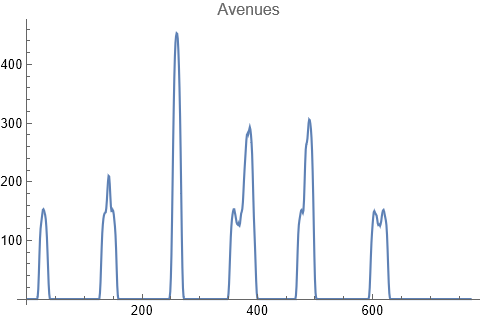 Standard errors for these location estimates can also be obtained from the half-widths of the peaks in these "spectra."

At this juncture we have obtained the angle of the street grid and locations of all identifiable streets and avenues in the image. Further processing will depend on the data structures you need and what you intend to do with this information.

I consider this to be a great result, because it has succeeded in identifying the numbers of streets and avenues and estimating the resulting $1+4+6=11$ parameters with appropriate precision from just $17$ rather uncertain point locations.

This method still works without the second idea (of combining the image with rotated versions of itself), when it can identify gridlines on a non-orthogonal street system, but it requires more data to achieve the same level of precision.

How about this approach:

Your grid can be described by seven parameters: Consider the lower left rectangle in your grid. You need five parameters to describe the four corners of this rectangle, and two parameters for the number of rectangles in both directions.

Next, you design a cost function that takes as input those seven parameters and your data (the points) and computes for each of your data points the squared distance to the nearest grid point. The sum of those squared distances would be returned as cost. Finally, you might want to add an extra term to penalize the grid vertices count: Imagine a grid with extremely many vertices, then there would be a vertex near any of your data points, reducing the cost to almost zero, but that is probably not what you want.

Finally, find the minimum of your cost function and the belonging seven parameters, e.g. with the R function optim, if you cannot find anything more appropriate.

This answer is not a complete answer to the exact question but I leave it as it does explain some principles and works well in another related situation.

In the case that a fitting is performed by computing the grid and a cost function based on distances, then a trick to speed up would be to rotate the points and find the distances to a rectangle with fixed orientation, instead of rotating the rectangle and finding the distances to the points.

So a part of the algorithm could be something like 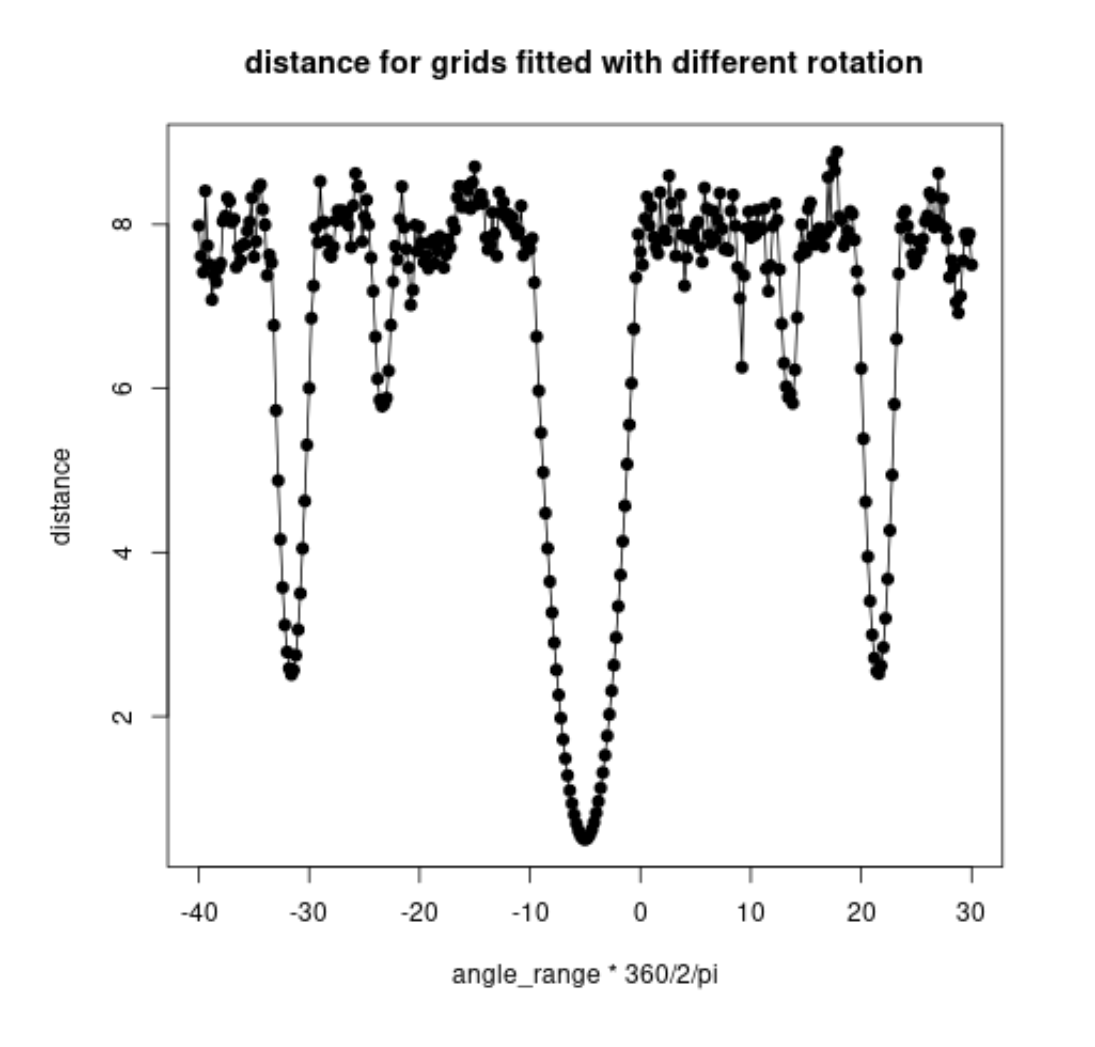 In the above graph there is a clear minimum at -5 degrees, which is how the data was generated.

One remaining problem is that for different angles there are also minima and these are due to the tendency of adding more grid lines than the true model (overfitting). You need some way to limit the total amount of grid lines. For this you need prior information.

The fit above is an improvement from the code below. It is using the scaling to add a penalty for adding too many grid lines (this will scale the image more strongly and increase the distances). Instead of computing the distance as

the above image uses

And the distance is computed in the scaled frame (where grid line distance are standardized to be 1) instead of multiplying with l_max to scale back to the original.

So the distance is relative to the grid line distance.

Sidenote: The above does not compute a beginning or end of the rectangle. However, after finding $\theta$ and the grid lines, you can find out easily where the rectangle ends and starts (I would not place the end and start of the rectangle in the optimisation, these parameters do not change the cost function and just slow down the fitting). 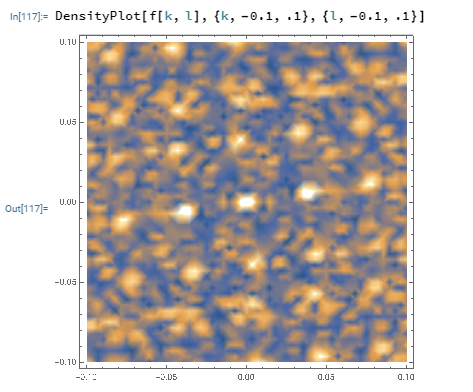 (You can think of this as the Fourier transform of the function defined by placing Dirac deltas at the points.) 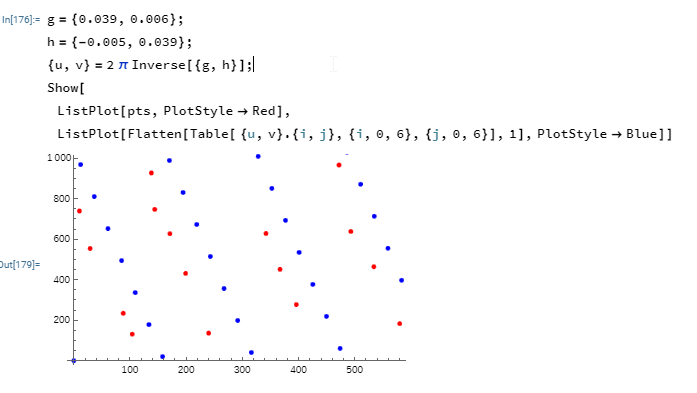 This doesn't give you the 'phase' of the points so you'll have to slide the lattice around until it fits.

Both the problem of finding bright peaks and sliding around a fixed lattice to get a fit are easier than the original problem. So this may make things easier for you.

On the negative side: this method is robust up to a certain amount of noise/deformation and then it quickly falls apart so you need to start with your worst examples and see if this approach can handle them. For example, I chose not to use this method for finding grid-points in a lens calibration method because even though the image looked grid-like, there was no actual regular grid that fit over the entire image due to the lens distortion.

If it's ambiguous which peaks to use you can, of course, write code that tries more than one pair of vector candidates.

Update: I think you don't need to do any shifting yourself. We can use the phase of the sum of the exponentials to extract the shift. Again, here is some Mathematica code: 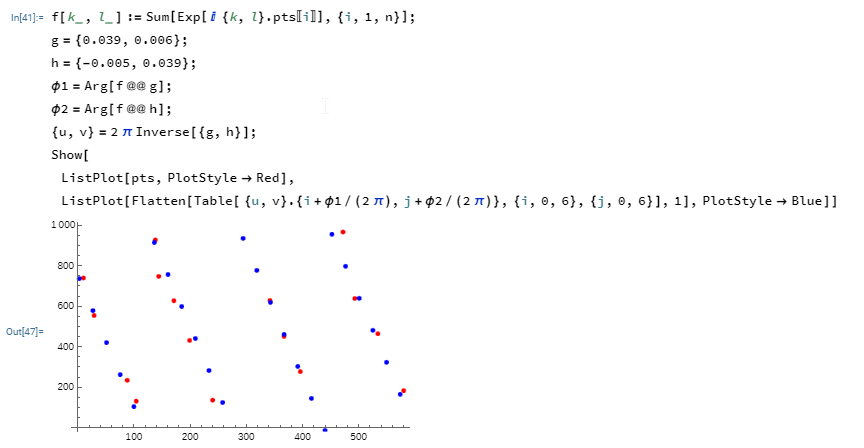 As an adjustable approach, you could try

With this approach you can explicitly set the number of grid lines in each direction. If searching for a solution, the parameters to adjust are reduced to a float, and two integers (the fixed angle, the number of vertical lines, and the number of horizontal lines).

Here is an example solution from some hasty code. I eyeballed the angle and number of lines each way. 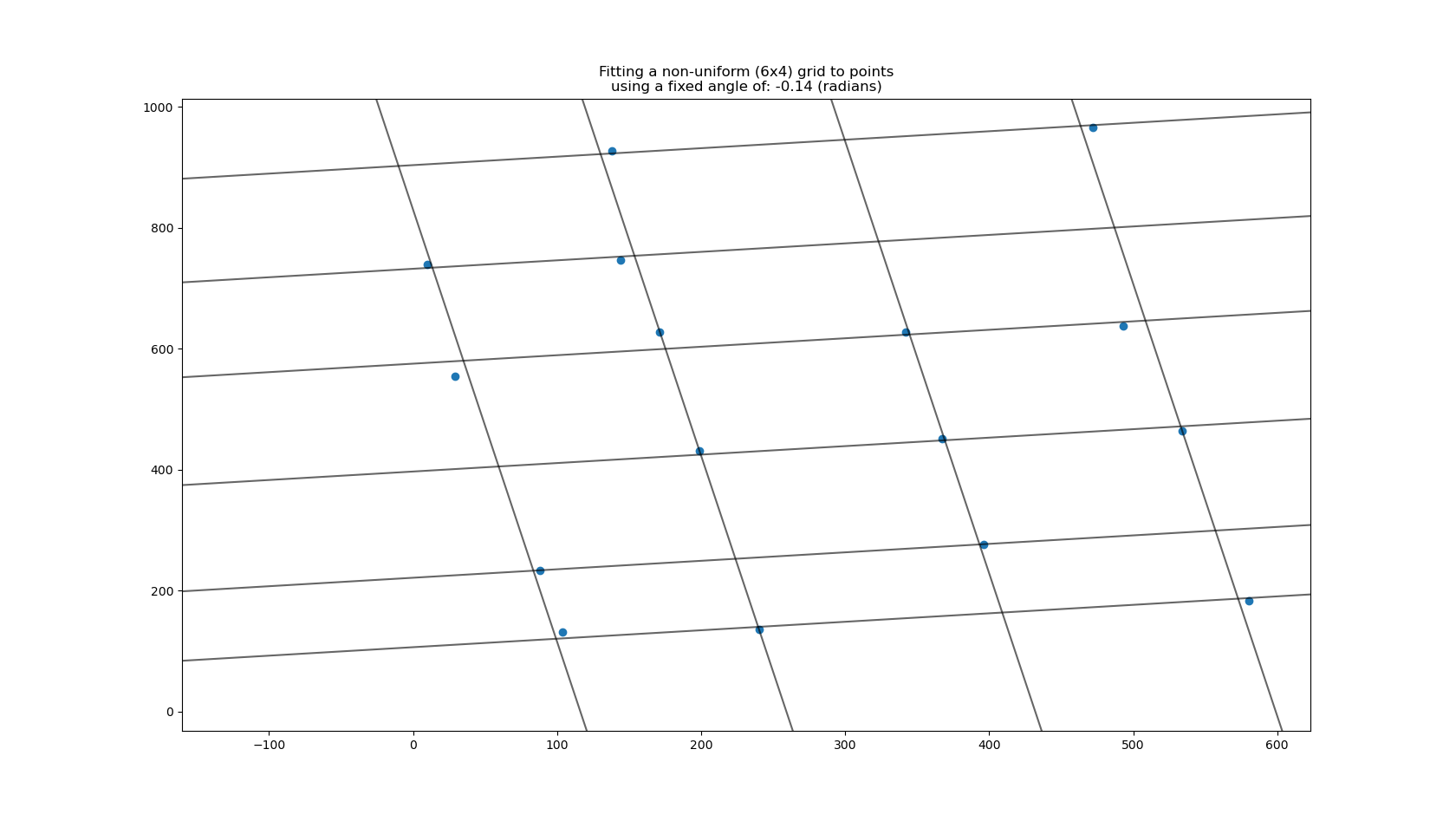 The quality of the solution will depend on the clustering algorithm. Here I used kmeans as a quick fix. A more carefully chosen algorithm might be smarter about ensuring minimum distances between clusters which will guarantee the lines aren't pushed too close.

37
Data has two trends; how to extract independent trendlines?